Day 4: The stars are really up there, even if we can’t see them in NYC

Bill, the former politician turned coffee farmer, was apparently a concierge for his first 18 months in Hawaii (good way to get to know a place!) and he gave us lots of recommendations for the rest of our time here. The first piece we took him up on? A trip to the Kanaloa Octopus Farm. I’ll admit I’m not typically a huge fan of octopi (what a great word 😂)–they’re pretty scary looking–but Bill’s description of the ‘really cute baby octopuses’ did me in, and I’m glad I went. It’s not a typical ‘farm’ of course, and it’s more of a research project right now, with the goal of learning how to grow octopus in captivity, mainly for consumption, since octopus fishing is significantly threatening the natural octopus population in places like Hawaii. The tour wasn’t as intimate as I would have liked (just a few too many people interrupting and asking questions during the tour), but I learned a lot (like, did you know that a female octopus can take in a sperm ‘capsule’ from a male octopus and then hold on to it for as long as she wants until she’s ready to lay her eggs?) and the octopuses were, indeed, pretty cute. They let you stick your hands in the tanks and feel them (if the octopus comes to you, of course–you can’t chase the poor things around). For $20, this place is worth a visit if you’re interested in biology and/or marine animals. 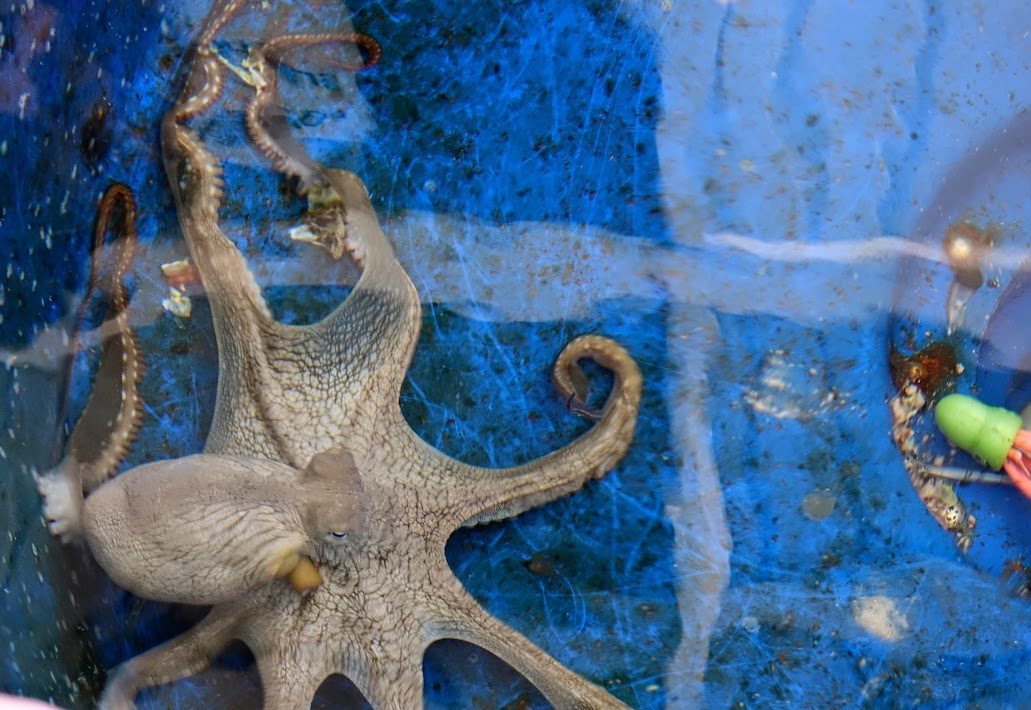 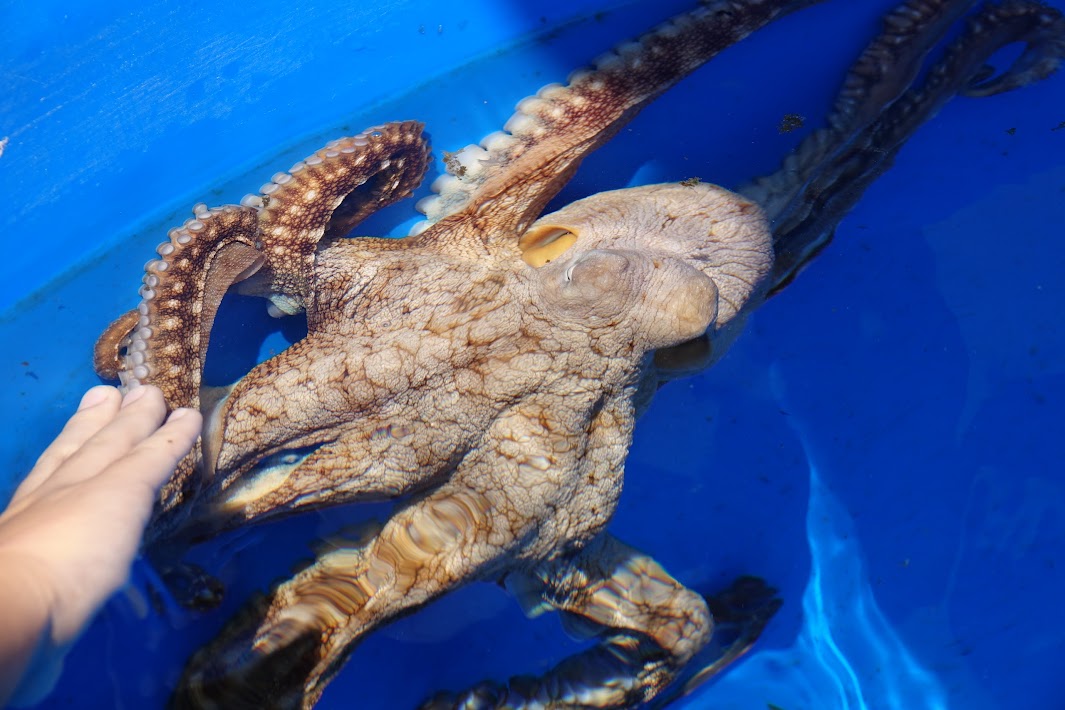 Plus, they have a little gift shop to help fund their project and they sell the cutest stuff, like this too-true mug: 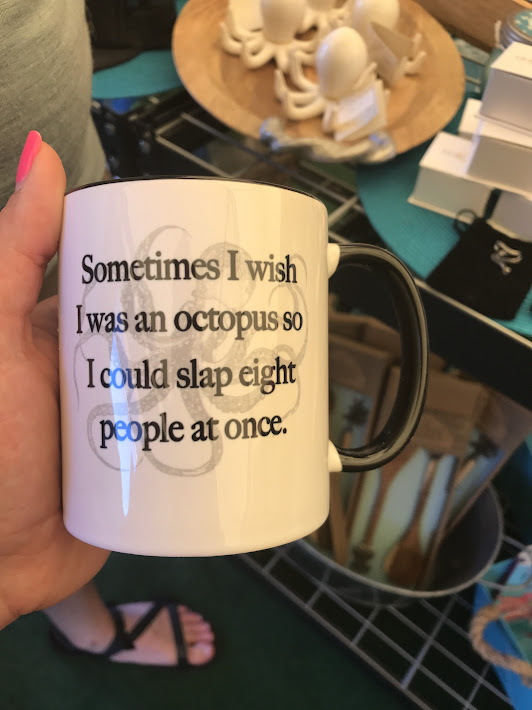 [Totally unimportant aside – I desperately needed a mani/pedi (as you can see in the pic above, my gel mani was super grown out, and my poor toe polish was permanently stained from our trek to Green Sand Beach) so I decided to go to a place nearby, before we headed to our other adventures for the day. As soon as I walked in, I realized it was one of those froofy nice places (i.e. $$$) but decided to just get it over with and call it a ‘treat’. Well, the mani/pedi was nice enough but it was the most expensive ‘treat’ of my life and not worth that kind of cash money–especially since both are already chipped. You’ve been warned.]

Our late-lunch pit stop at Lava Lava Beach Club was a good call. Good drinks, yummy food, fantastic views–what else do you need? [Note: I wouldn’t necessarily recommend actually staying at this hotel though…prices look astronomical and it’s pretty touristy, I much preferred the more local feel of Kailua-Kona.]

The real highlight of the day was the trip to Mauna Kea (a dormant volcano) for sunset. Since we had our 4WD Jeep, the plan was to drive all the way to the top – approximately 13,800 feet above sea level. The drive along Saddle Road had some nice landscape views and we could slowly start to feel our ears popping from the changing altitude (and we could definitely feel the temperature change!). The ‘required’ 30 minute stop at the Mauna Kea Visitor Center at ~9,000 feet above sea level (to allow you to acclimate to the altitude) was a good idea—I could already feel the difference in the air just walking uphill from the parking lot to the building itself. The Visitor Center food selection is pretty bleak, so I recommend bringing food in a cooler (we brought sandwiches that we made at our Airbnb that morning) plus lots of water (thin air dries you out–I could feel my contacts drying out once we got to the top). After a quick bathroom break (they have real toilets! but also some port-a-potties if the real toilets are out of commission 😳), up the mountain we went. The climb up was steep, along a windy road (5 miles of which is quite bumpy) with some scary looking cliffs, but the views were beautiful. 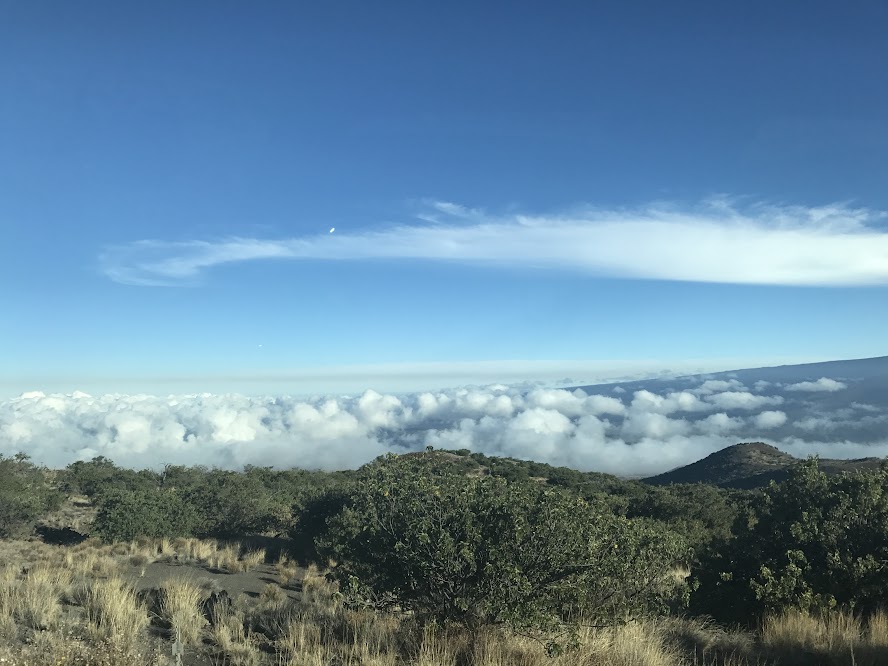 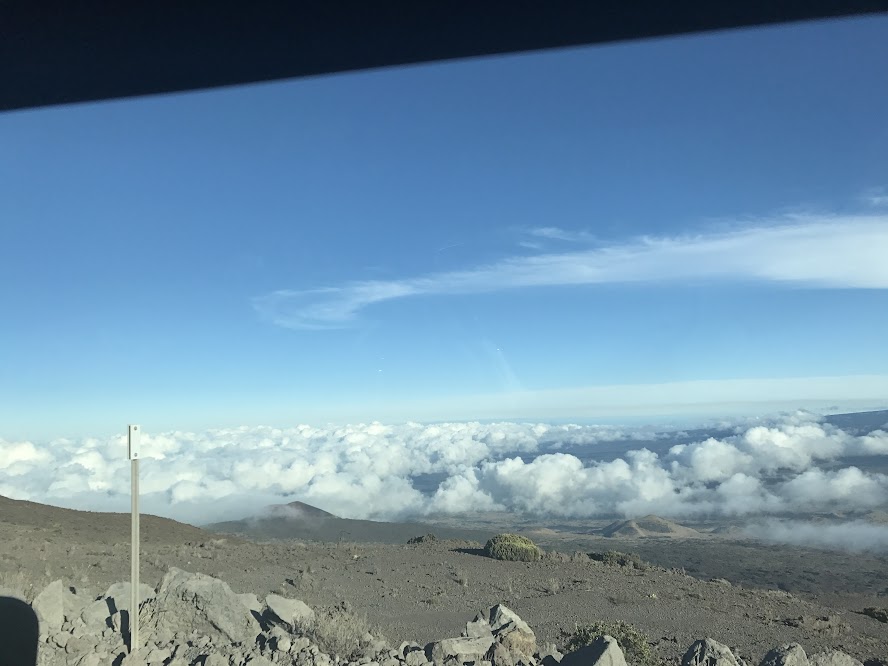 Once we made it to the top, the views were even better. We still had about 45 minutes until sunset, so we walked around a bit to get different angles: 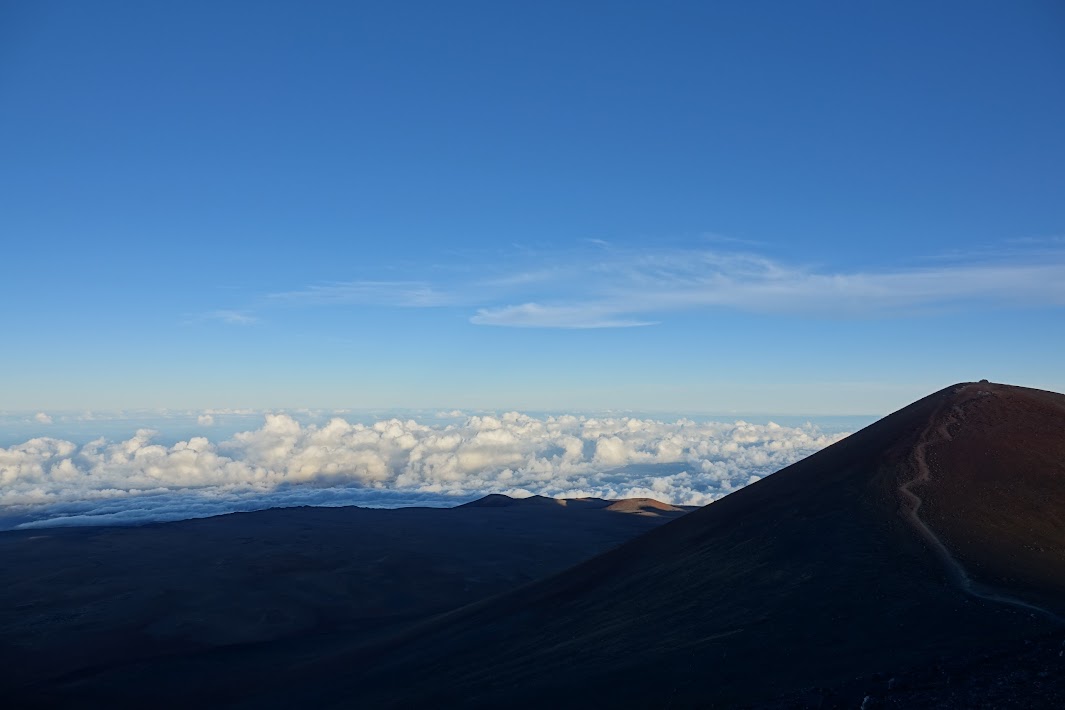 We managed to get a couple of actual sunset shots but not particularly great ones–there were a few too many clouds (and people) for a perfect view: 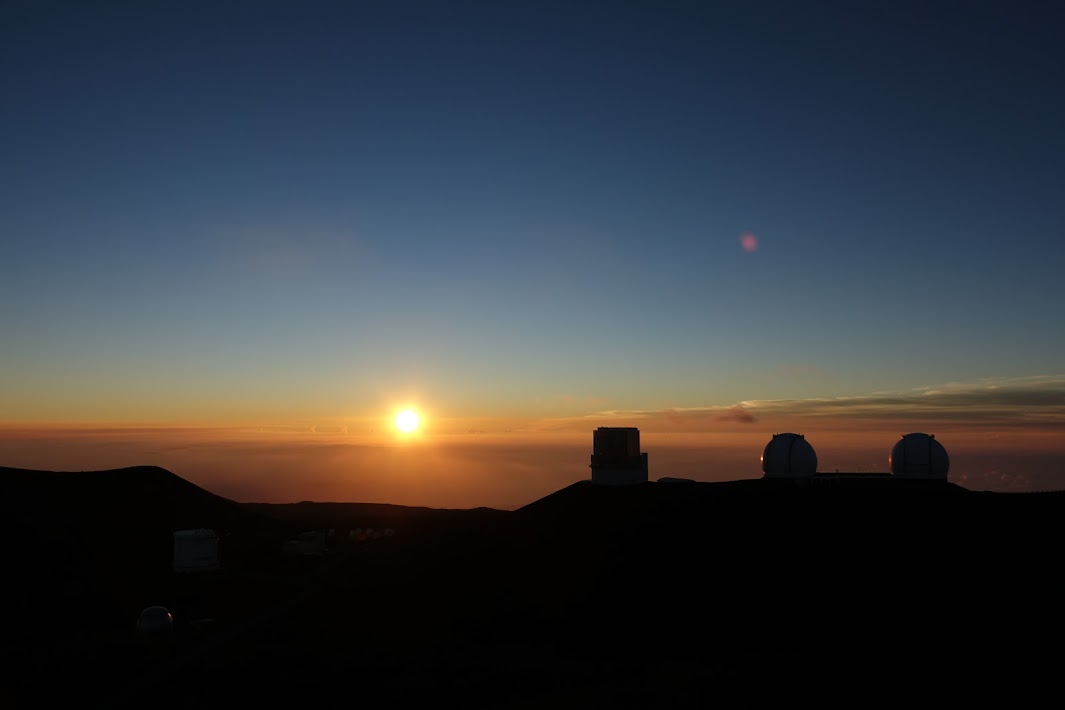 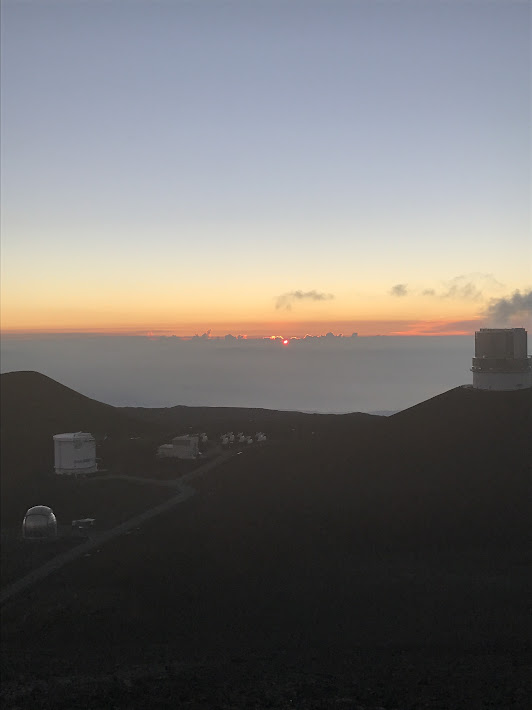 After the sunset, temperatures became pretty frigid, especially after near-90 degree (32C) temps just a few short hours prior. I was not coping well: 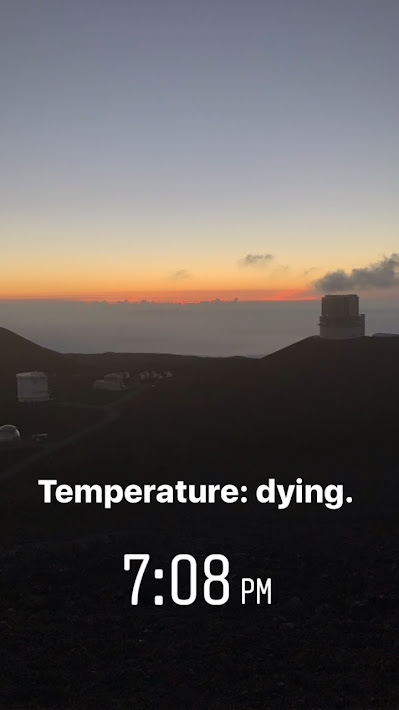 However, my torture was rewarded. The drive down was a little terrifying, but we were able to park at the Visitor Center for a little star-gazing. Temperatures were still quite chilly (46F/8C), but it’s hard to care too much when you’re staring at the sky in awe (remember, I’m from NYC…my idea of a star is Brad Pitt): 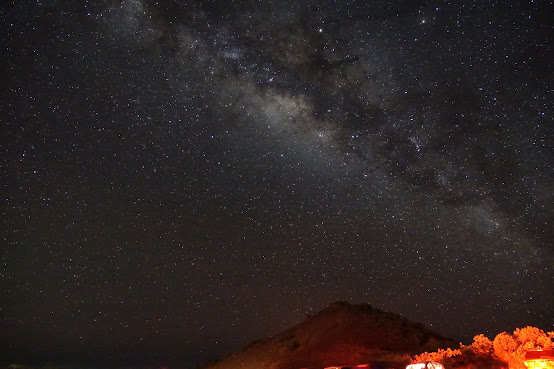 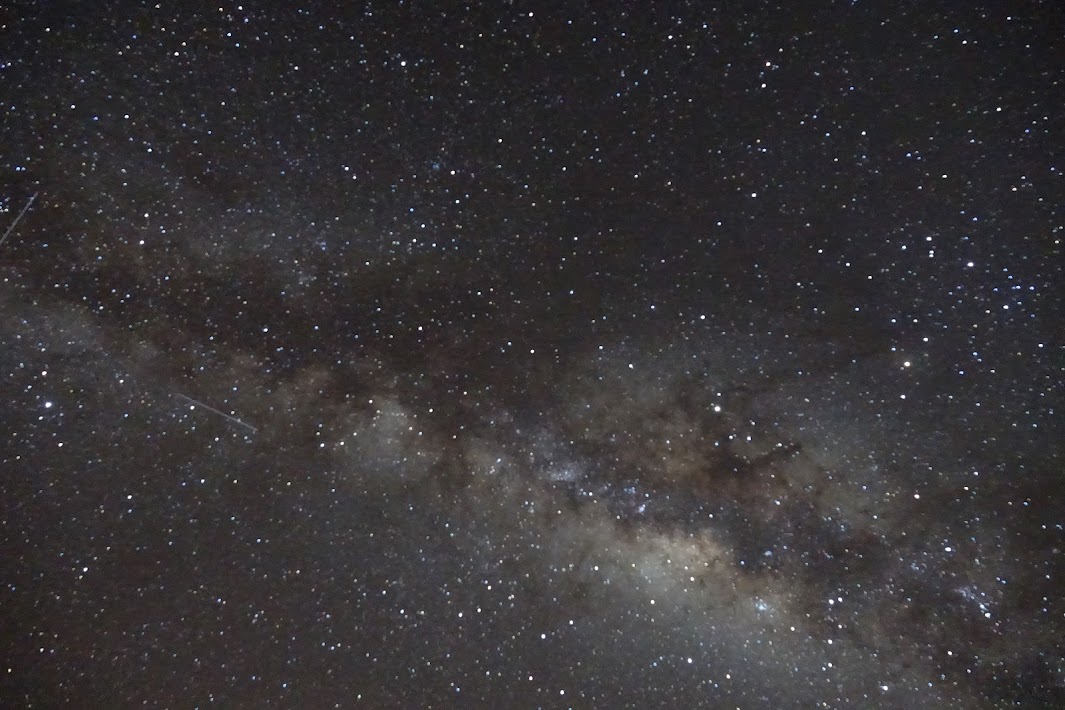 We decided to drive down to Two Step Beach at Honaunau Bay for a little snorkeling action (this was also recommended by Bill the politician-turned-coffee-farmer). I was looking forward to seeing some little fishies and maybe even some spinner dolphins (happens pretty frequently at this bay apparently), but I wasn’t super excited about the actual snorkeling part. Sound illogical? I’m not such a big fan of the ocean, so I want to see the fish but I don’t want to be in a large body of water where unknown creatures could attack me. #thalassophobialight I sucked it up like a big girl and I don’t regret it. We didn’t see any dolphins but there were plenty of adorable fish and cool coral to look at. The only warnings worth noting about this place: 1) be sure to actually use the ‘two step’ entrance into and out of the bay to avoid a number of hazards and 2) there are a zillion urchins tucked into every nook and cranny of this place, so water shoes are a good idea (or flippers if you choose to use those instead) and try to stay away from the big ones.

Afterwards we briefly visited the Pu’uhonua O Honaunau National Historic Park. It wasn’t something we originally planned to do, but it was right next to the beach and turns out it’s included as one of the parks you can visit with the Annual Pass we needed to get anyway for the Volcanoes National Park + Haleakala in Maui. Why not learn some interesting history about Hawaii? 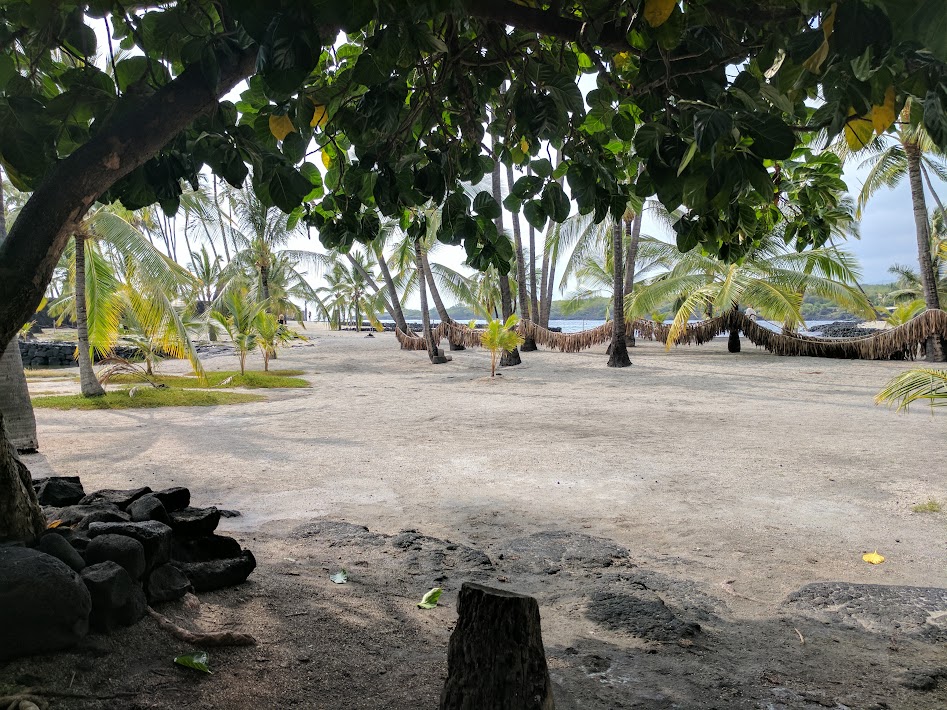 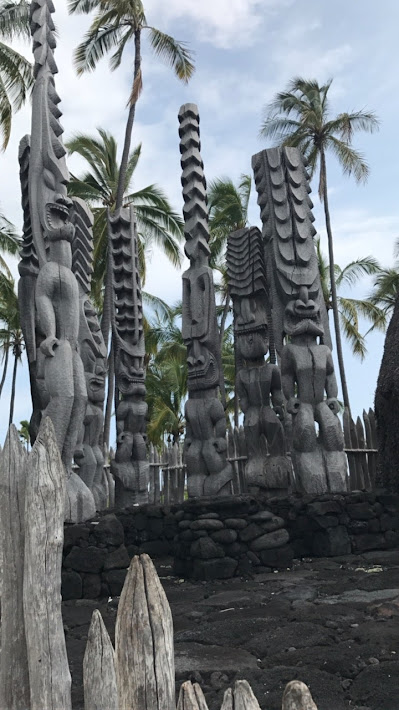 It was a really hot day (I was actually hiding from the sun at the beach), so we found a cold little treat at Gypsea Gelato on the way back to our Airbnb: 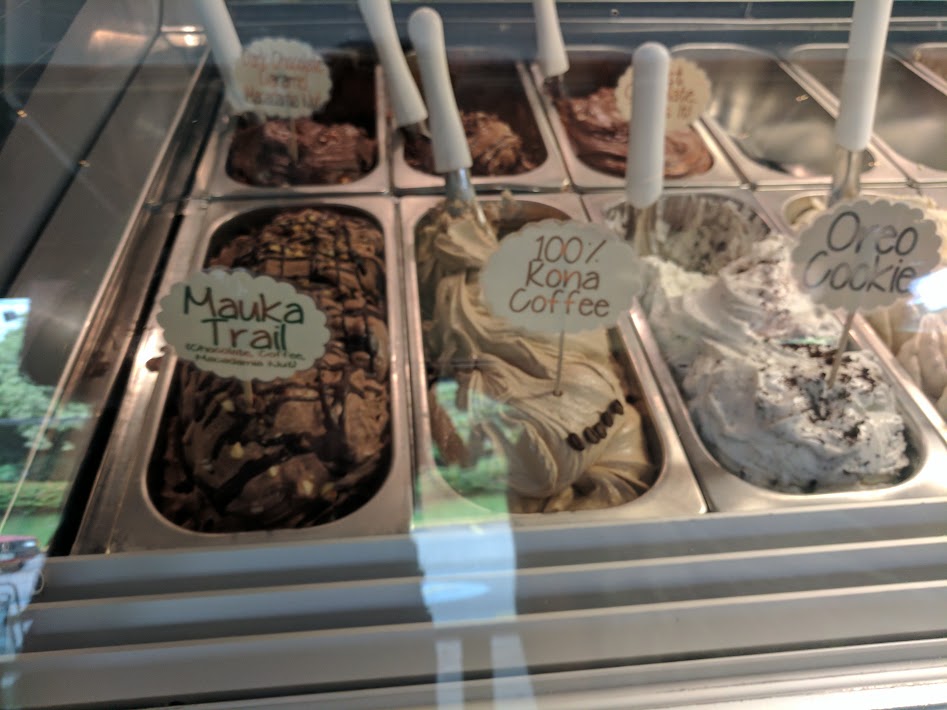 On our way to the Hawai’i Volcanoes National Park, we made two very important pit stops:

1. Punalu’u Bake Shop: “The Southernmost Bakery in the USA” and home of the infamous malasada–a Portuguese donut-like pastry, but better. We got 3: one mango flavored, one guava filled, and one lilikoi glazed. MMM MMM YUM. 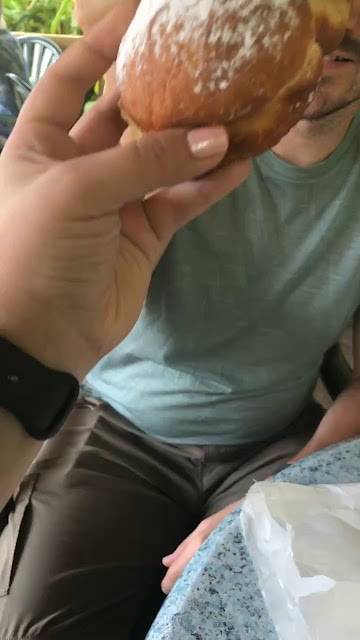 2. Punalu’u Black Sand Beach: which is exactly what it sounds like. Pretty cool to see, but not necessarily a place I want to catch some rays unless I want to burn to death…that sand was 🔥🔥🔥. 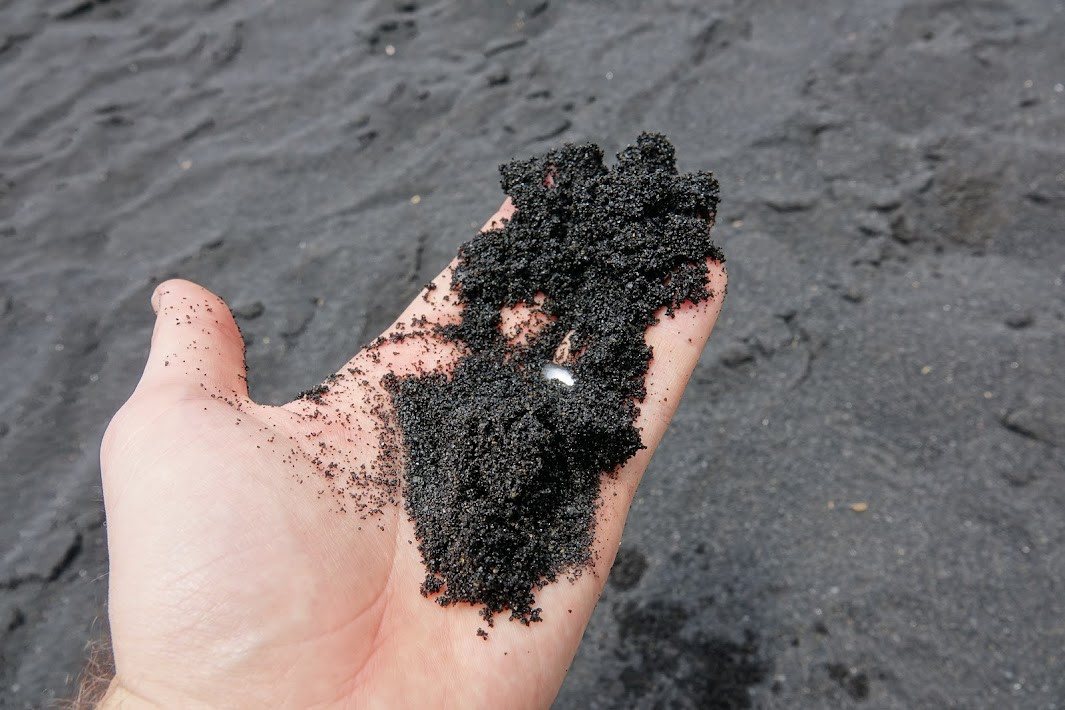 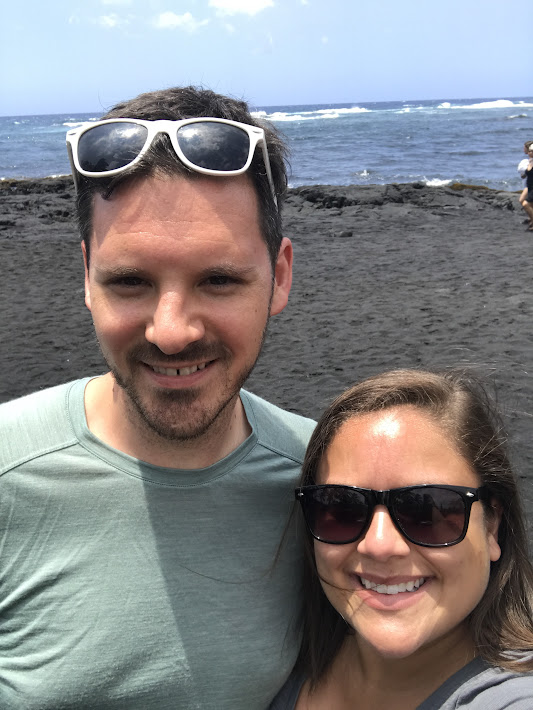 The National Park itself was incredible. The landscapes are amazing, the views unbelievable, and then you remember that you’re pretty damn close to TWO active volcanoes (in fact, one is actively erupting!)…there are no words, so pictures will have to do: 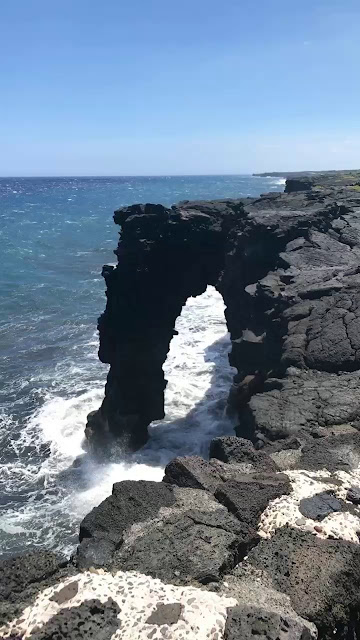 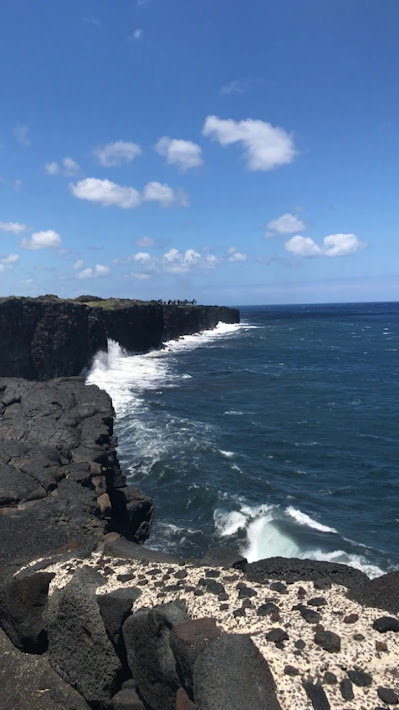 Sea Arch at the end of Chain of Craters Road 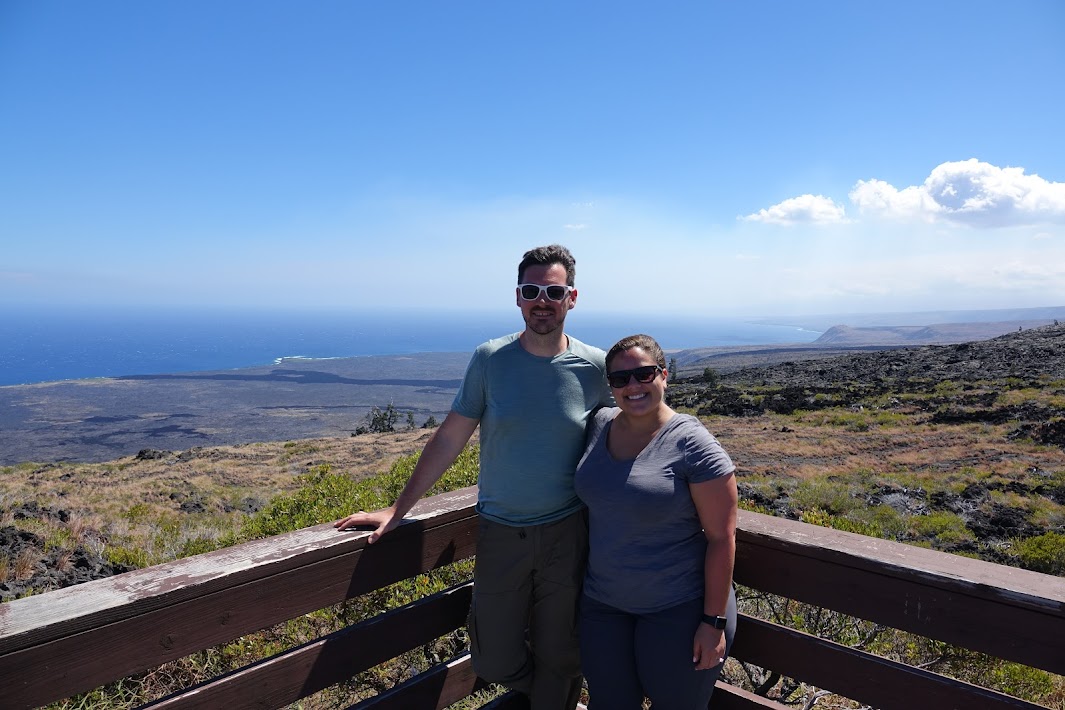 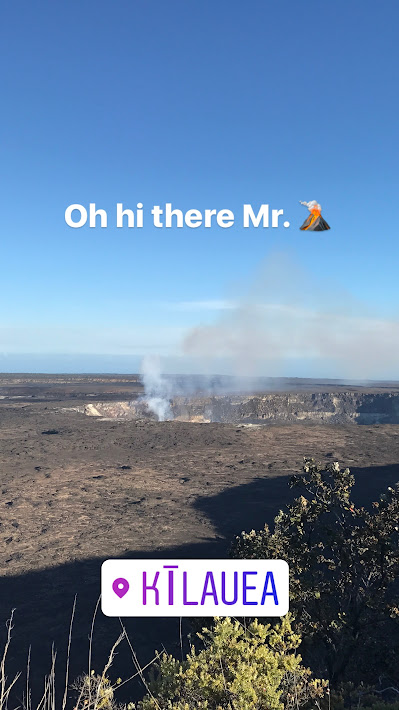 After our volcano adventures, we headed towards Pahoa for our impromptu single-night Airbnb stay near our upcoming crack-of-dawn lava boat tour. We stopped for dinner at Kaleo’s Bar & Grill, where I had yet another delicious passion fruit margarita. I swear, these things never get old. [We also had to make a pit stop at Longs Drugs to find some Dramamine, since I had tragically lost track of my scopolamine patch sometime throughout the day (🤦🏽‍♀️). My first casualty of the trip.] We checked into our Airbnb at 8:30pm and were in bed by 9:30pm (typically, my prime awake time) for our 3am wake up call… the things we do to see cool shit.

And with that, I’ll give your eyes a reading break. More soon!

One thought on “Volcanoes for days”