Day 7: Flowing lava is the coolest thing you’ll ever see

As mentioned in my last post, this was going to be a loooooong day. We woke up at 3am so we could make our 4am lava boat tour. Those who know me know that I am not, in way, shape, or form, a morning person, so I basically felt like I was dying–but the prospect of lava kept me going. There are only a few boats that are allowed to do these tours (special permission from some governing entity is required to ensure proper safety precautions, because you know, LAVA), most of which are smaller 6-8 person boats (plus crew), and this was the kind that Bill (our politician/coffee buddy!) recommended. The price per person is pretty offensive ($200!😲😫) but we decided this would be a once-in-a-lifetime experience and took the plunge (plus we skipped some of the other tours people recommended, like the Manta Ray Night Snorkel/Dive, to justify the preposterous expense). Let’s just say that we don’t regret a single penny. Our boat/crew were great, the group size was perfect (it was just us and a family of 4 plus the 2 crew members), our ride out to the lava flow point was smoother than expected (best water they’d had in days, the captain said, which was good for my seasickness), and the lava was INCREDIBLE. Be jealous:

Still cool in the daylight:

Ben will be writing a separate post sometime soon with way cooler photos of the lava, so I’ll leave it at that. [Note: For those who get seasick like me, the only part that was rough from that perspective was when we were actually stopped at the lava, since the water bobs a LOT. That said, you’re staring a lava, so it’s easy enough to remain distracted. Hard to say if my Dramamine actually made a difference or not?] At the recommendation of the Captain, we grabbed breakfast at Pele’s Kitchen–I definitely recommend the food (and the service was great, too). We also made a brief stop at the Lava Tree State Park before heading to Hilo. It was cool for about five minutes…once you’ve seen live, flowing lava, dried up lava is just not very cool anymore. #firstworldproblems

Hilo was honestly a bit disappointing. [To be fair, I was literally falling asleep and had to stop at Longs Drugs for a Coke Zero on the way, so perhaps my sleepy brain couldn’t appreciate it.] We walked around the Liliuokalani Gardens a bit and those were nice, but there didn’t seem to be much else to do. I’m glad we stayed in Kona instead. Next stop was Akaka State Park to see the waterfall. Of course it started pouring as we got there, but we’ve started taking the Hawaiian approach to rain: eh, it’s fine. The waterfall itself was pretty, though I wish we could have gotten a little closer. After having done the Road to Hana in Maui (post coming soon), this waterfall is nice but not spectacular (to be fair, it’s also not the right season to see waterfalls at their best). I also think going to Victoria Falls back in 2015 has ruined waterfalls for me…once you see that, everything else is chump change. 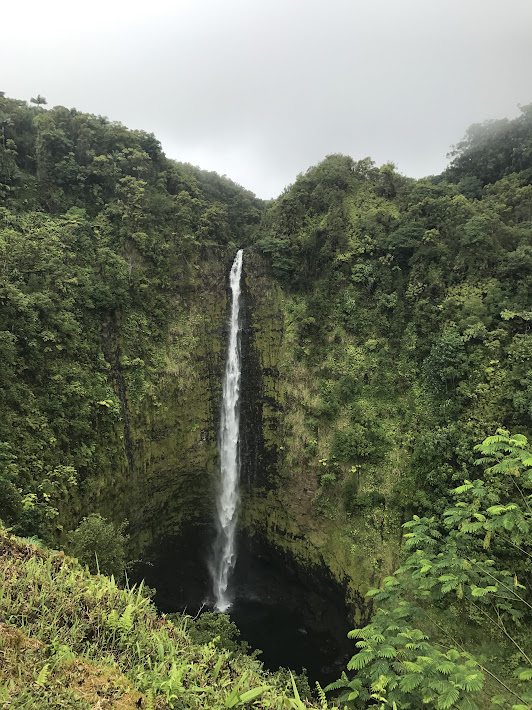 Next stop was the Waipi’o Valley Lookout point, and there were a couple of pit stops worth noting. First, we stopped for lunch at the Papaaloa Country Store & Cafe. We didn’t buy anything at the store, but we grabbed a beer and some food in their new dining room area–this is really one of the only places to stop for food along this drive, so you don’t have much of a choice, but I actually recommend a quick pit stop. The food is decent, the people were nice, they have a post office if you want to send a post card, and perhaps most importantly, they had very nice and CLEAN restrooms. I was in heaven. At the recommendation of Bill (he really turned out to be quite the tour guide for us), we also made a pit stop at the Tex Drive-In. Bill warned us to avoid the food, but said we HAD to stop for malasadas. Since we absolutely loved them from the Punalu’u Bake Shop, why not have some more? The ones served here are GIANT, so come hungry. Our mango-filled one was delish. Waipi’o Valley was really amazing, though it’s hard to capture in pictures: 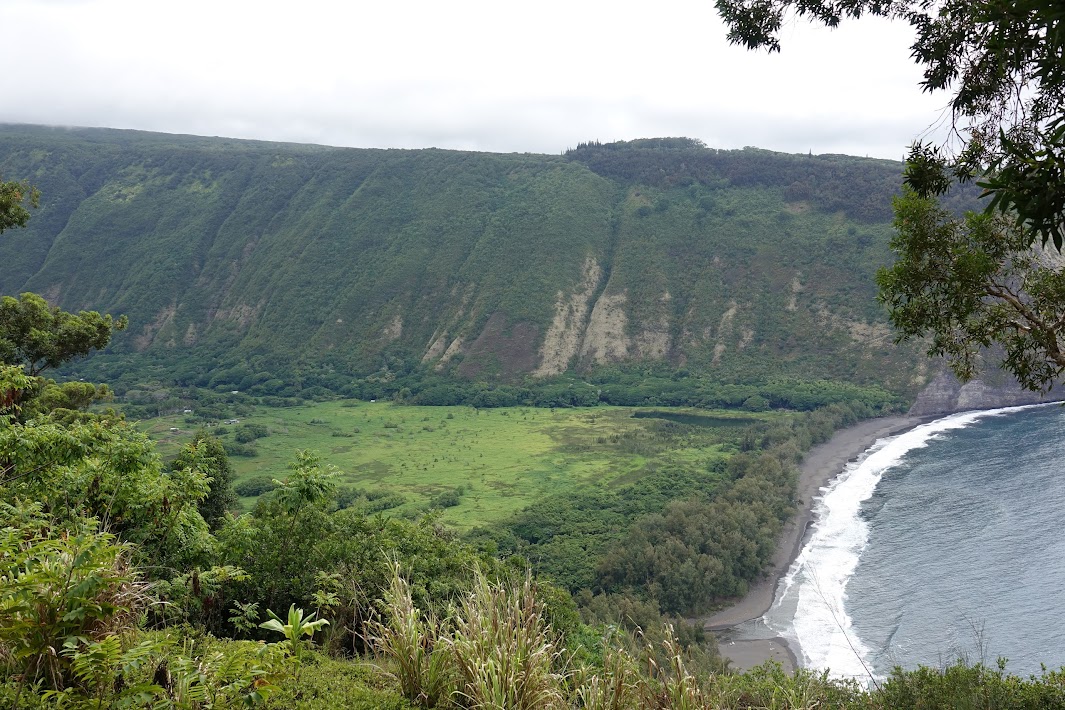 We drove back home around the north side of the island so we could say we’d made the full loop–at one point you can see Mt. Haleakala from up there! Worth a drive if you have the time.

We went to Magic Sands Beach for a bit in the early afternoon since it was so close to our Airbnb and we hadn’t had a chance to go there yet. It’s a nice beach, but it’s a bit crowded and parking is a bit annoying, so go if you can but you’re not missing out too much if you don’t. Afterwards, we went to Kona Brewing Company for a brewery tour and tasting. The tour is cheap enough ($10 per person) and it ends with a beer tasting, so it’s worth doing if you’ve got the time. Most of the beers was super yummy (some were too dark for my taste but I liked them way better than most other dark beers I’ve tasted), and we ended up going to the pub that’s part of the brewery to taste some more (only 4 are included in the tour). Funnily enough, all of their bottled and canned beer is actually produced outside of Hawaii because they don’t have enough natural resources to bottle/can on the island, so if you purchase ‘pre-packaged’ Kona Brewing Company beer on the mainland OR on Hawaii, it’s not actually from Hawaii! Here are some of the ones we tasted:

We ended the night with a trip to the movie theater–how wonderfully normal! Saw Girls Trip and I can’t recommend it enough–Ben and I both cracked up the entire time. Go see it!

This was our last day in Hawaii–we were flying out that afternoon for Maui. We made a pit stop at the Kona Farmer’s Market (which sells fresh fruits and veggies but also souvenirs), and I’m glad we waited until the last day or I would have added 10lbs of unnecessary souvenirs to my suitcase. Totally worth a stop! Last stop in Hawaii was brunch at Daylight Mind Coffee Company, at the recommendation of our Airbnb host. My mango mimosa was delicious, my burger not so much. It wasn’t necessarily bad, it was just really beefy, which I hate in burgers. That said, the view is spectacular and they have free WiFi, so still totally worth a stop if you’re looking for a drink/coffee with a view.

Ben booked our flight between Hawaii and Maui, and of course he went for the cheapest option…which was a single propeller plane. Our rental car shuttle driver told us that folks love Mokulele Airlines, he’s never heard a single complaint (in fact, people loved it and thought it felt like a charter plane experience)–so I went with an open mind, but seeing that tiny plane nearly gave me a heart attack 😳😫. I survived, but I don’t think the charter life is for me 😂. 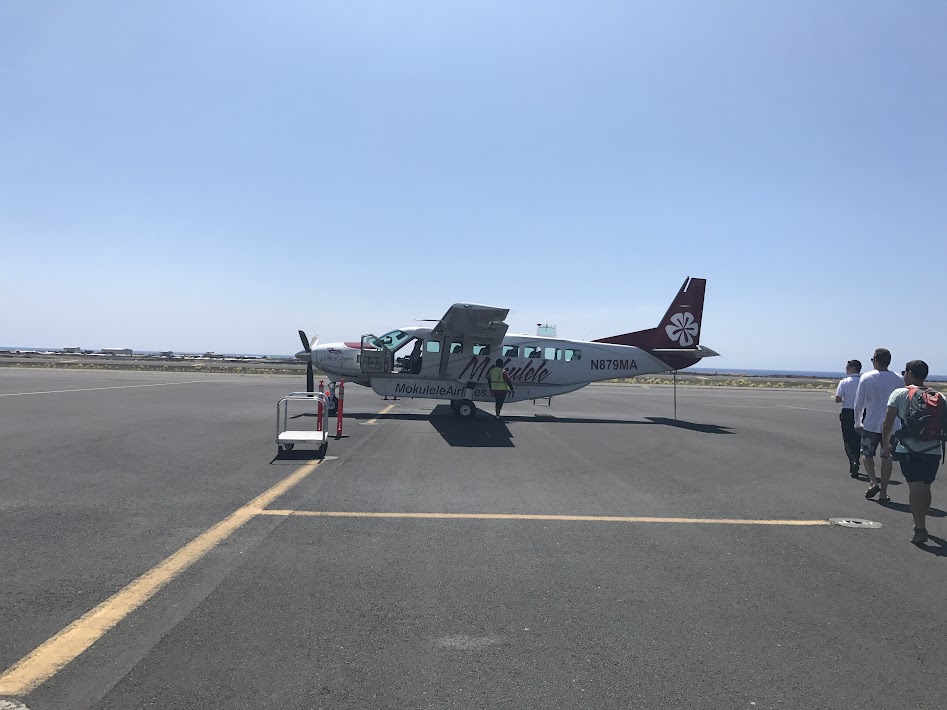 Thanks for reading! Separate post coming soon about our few days in Maui.