Finally, it was time to head to a proper city: Melbourne! Being the NY snob that I am, I still managed to find things to complain about 😂 Forgive me Aussies.

Day 30: Chocolate on chocolate & the best risotto ever

I also had a hot chocolate that was to die for:

Once we were in a sugar coma, we headed to Melbourne…we knew we hit the city when we were sitting in standstill traffic, and I felt home again! Bumper to bumper traffic somehow simultaneously drives me insane and makes me happy…sue me.

After 4 days in the desert and 5 days on the road, we decided to treat ourselves to a swank hotel for the next few days: The Langham – Melbourne. I felt like I had entered heaven when I walked into the glowing lobby. 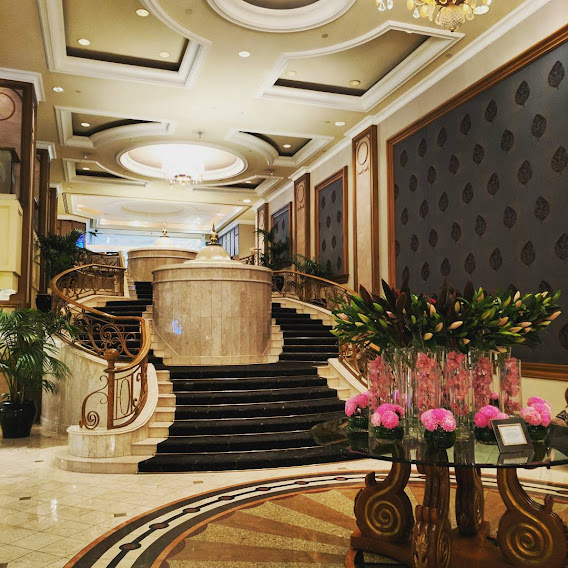 Of course, once we got into the room, we had the tragic realization that we desperately needed to do laundry and obviously that wasn’t happening at the Langham (at ~$15+ per item, you’d think they were returning each item wrapped around a solid bar of gold). And here was Melbourne’s first failure: nearly no laundromats! Most were dry cleaners, had the most tragic reviews I’ve ever seen, or were so obscenely expensive that I refused to go. So we had to trek ~30 minutes to find one and still paid too much money but at least it got done. Laundry is most definitely my least favorite part of this trip.

[Also, another Melbourne complaint…what is with this public transit system? They have underground commuter trains, above ground trams, and buses, and normally multiple options means it should be easier to navigate, right? Not so much. It was a hot mess, and on top of that, they charge you AUD$6 for the public transit card, which doesn’t go towards your actual transit! I will never again complain about NYC’s USD$1 charge for a Metrocard. Also, I cannot stand tap on/tap off public transit systems–how on earth do you expect me to figure out zones and different prices and properly preload my card if I’m just a visiting tourist? Make it flat fare please!] Ok, rant over.

Our laundry efforts were thoroughly rewarded with a delicious dinner at Tutto Bene. Everything we had from start to finish was great, but I need a moment to wax poetic about this risotto: each rice kernel was firm and somehow still melted in your mouth, the pancetta was perfectly crispy, it had just the right amount of cheese, and even the peas (peas, which I hate!) were good. I would seriously eat this risotto every day. 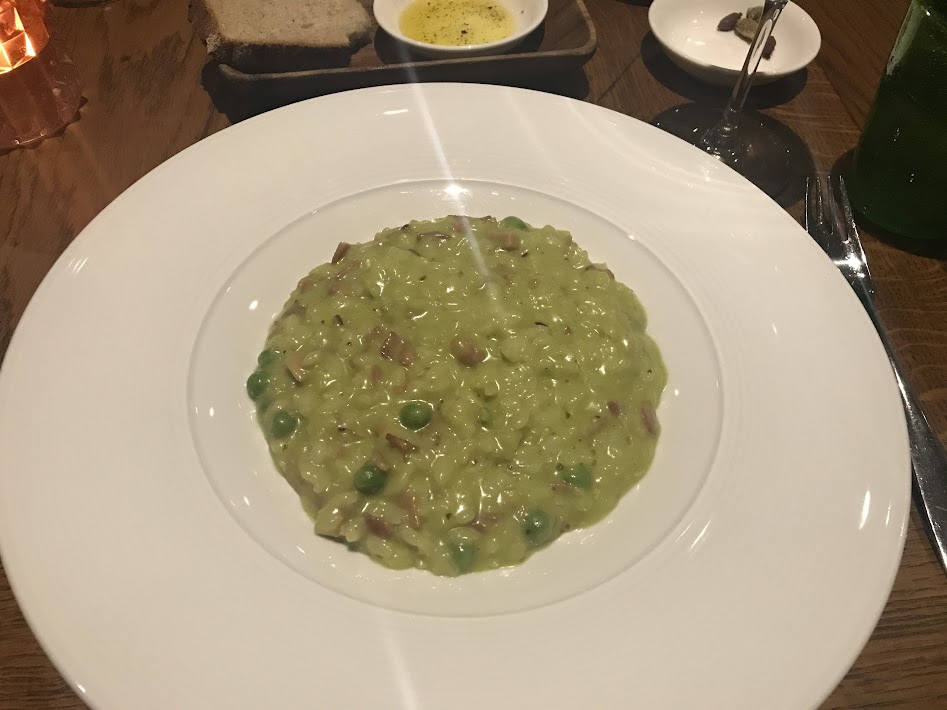 Ben’s gnocchi and tiramisu deserve some air time too: 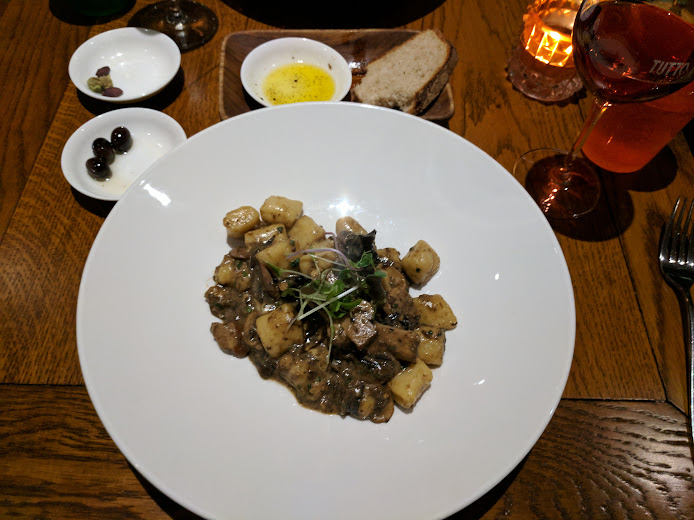 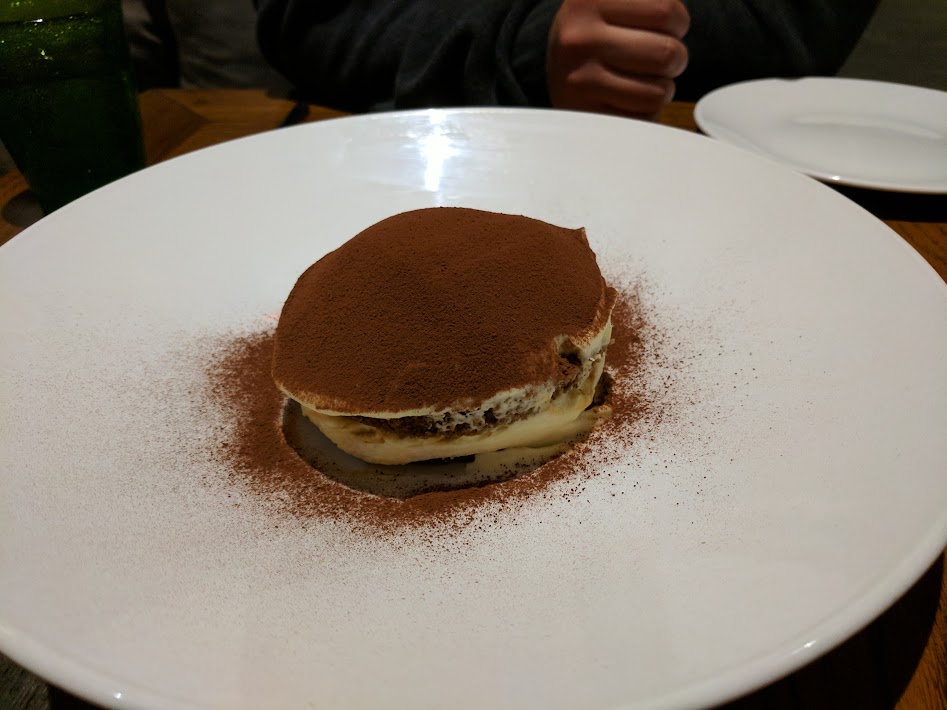 After grabbing a quick breakfast, we headed to the Royal Botanic Gardens to walk around a bit and take in the scenery (plus, it’s free, our favorite price). The trees and flowers were far more lively that I expected given that it’s winter…somehow plants survive winter in Australia despite falling apart as soon as we have one ‘cold’ day in NYC in the Fall. 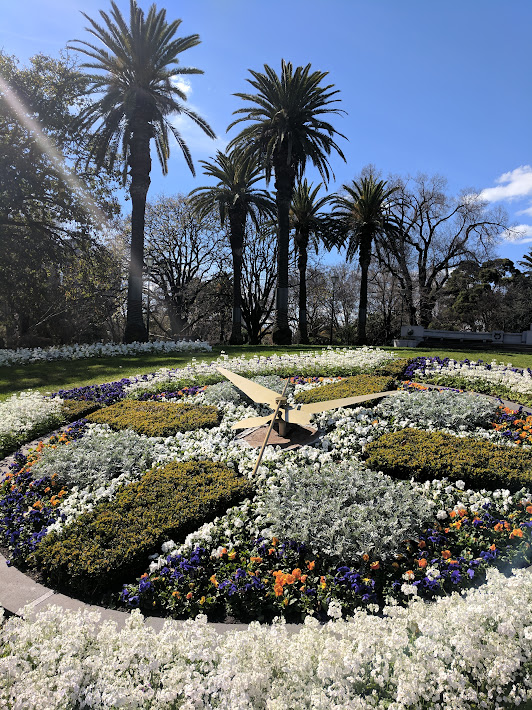 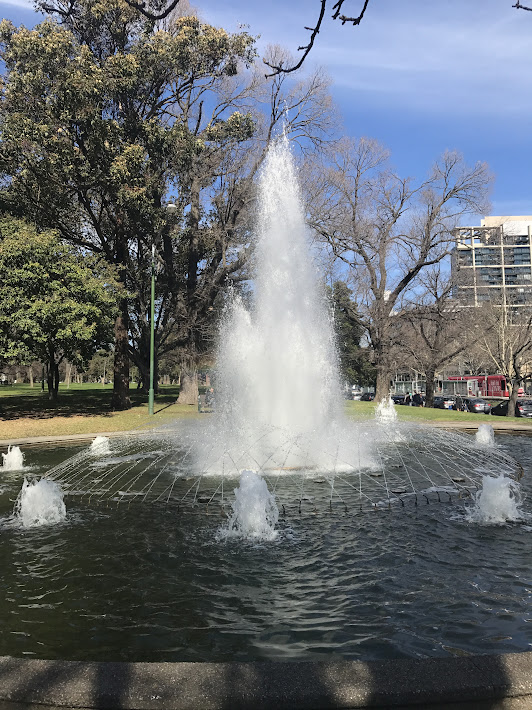 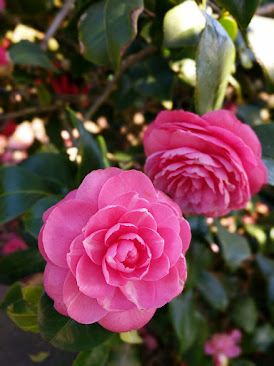 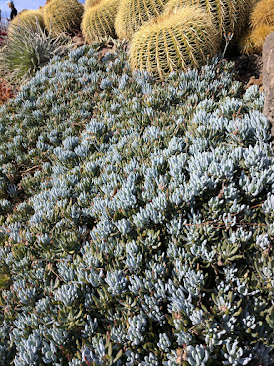 Later that evening we decided to go to the Eureka Tower Skydeck for some city views, as they advertise that it’s the highest public vantage point in the southern hemisphere (935 feet/285 meters). The views were great, but in all honesty, not as great as I’d hoped. The goal was to go in time for sunset, figuring it would offer amazing views with great lighting for photos and then allow us to see the city light up at night. The theory was sound but it was never going to work the way we intended because 1) they have too many lights on inside the skydeck, which makes it impossible to truly see the city past the glare not to mention take photos and 2) it was way too crowded. We managed to get some good views, but I think it would be way better during the day (and certainly with less tourists!). 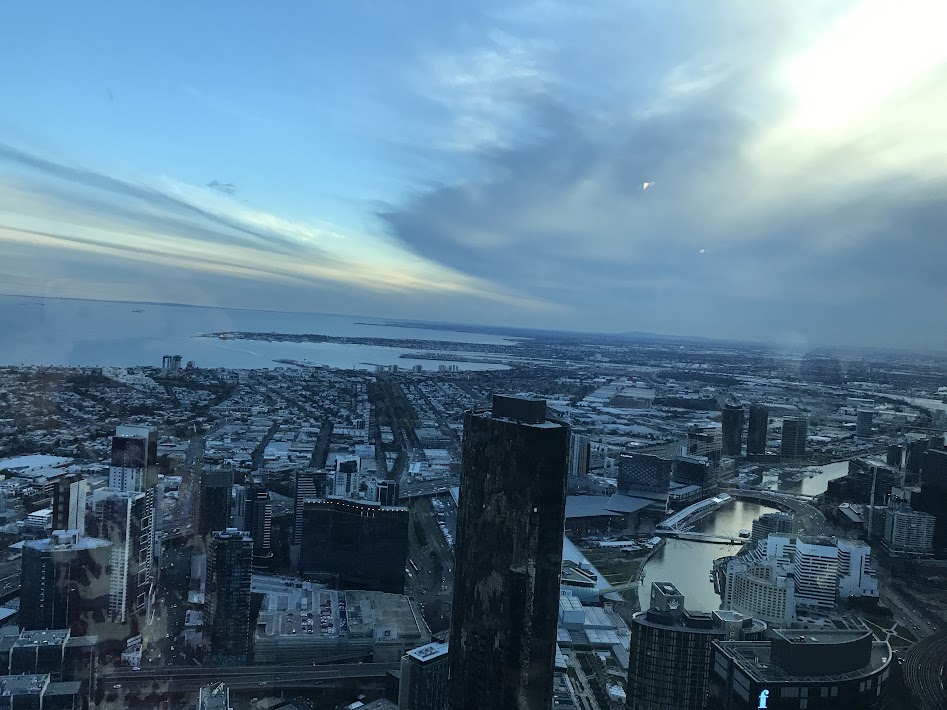 Next, it was time for dinner and a movie! I was in the mood for sushi for dinner (fake sushi since I don’t eat seafood, including seaweed–yes, I know, I’m the worst) and we found a Japanese restaurant in the nearby mall that also housed the movie theater, but it was a total disappointment. Always a sad moment, but we managed to move on because War for the Planet of the Apes was awesome-sauce. Fully recommend it if you haven’t seen it! (P.S. One more complaint for Melbourne…how on earth can a movie in Melbourne be more expensive than a movie in the heart of NYC? It’s preposterous.)

After a quick lunch at Subway (an American classic 😂), we took the day to simply walk around the city. First stop was St. Paul’s Cathedral, despite my firm belief that once you’ve seen one cathedral, you’ve seen them all (except for the Sagrada Familia in Barcelona…that place is a masterpiece). 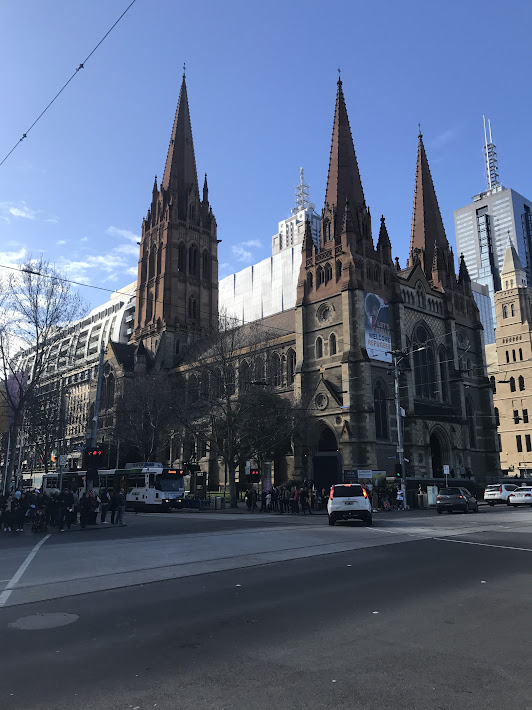 Oddly, they don’t allow pictures of the inside of the cathedral unless you pay some sort of picture fee? First time I’ve ever seen that and found it pretty ridiculous…if the Vatican lets me take pictures for free, this place should too. Despite that, I snuck this one picture from the very back of the church, technically in the area BEFORE the “no pictures” sign 😏: 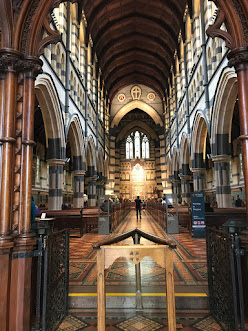 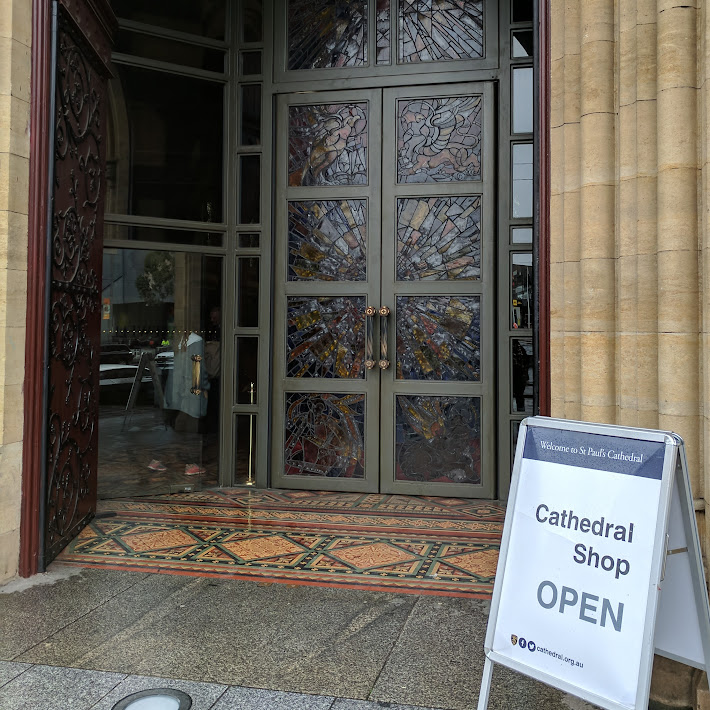 Next stop was the Block Arcade, a small, beautiful shopping mall in the heart of Melbourne. 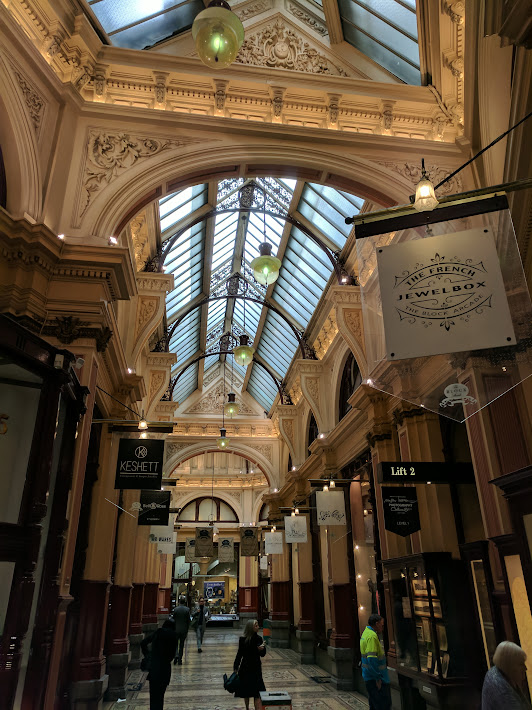 They also had an adorable tea shop serving classic British high tea with a line running outside the door and cordoned off to the side. This little heavenly spot will come up again in just a second…

We then went to visit the Victoria State Library, as it’s supposed to have some incredible architecture. We were not disappointed! 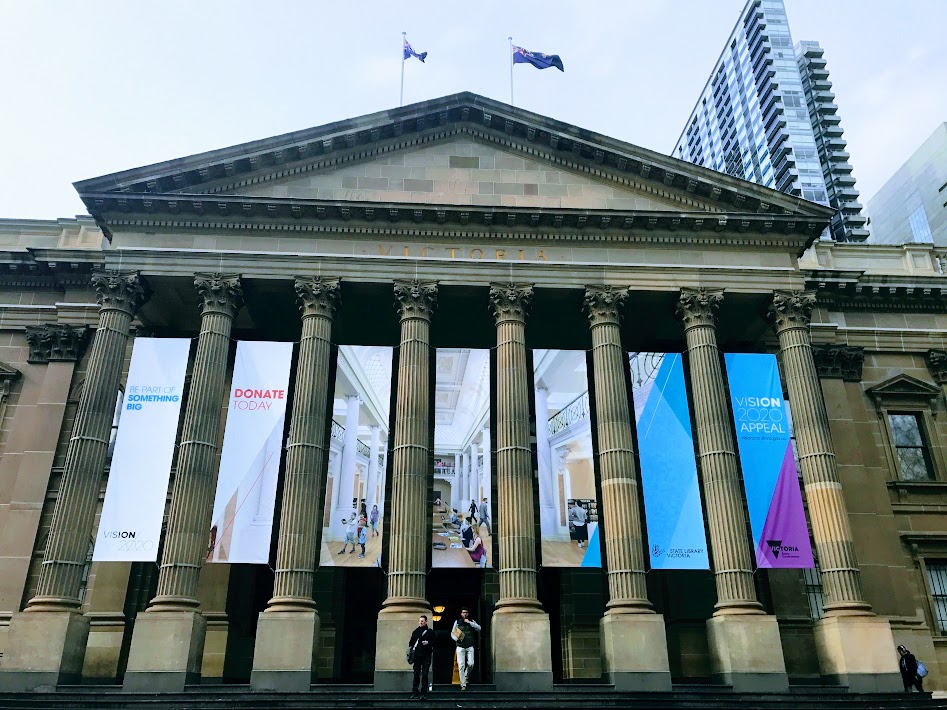 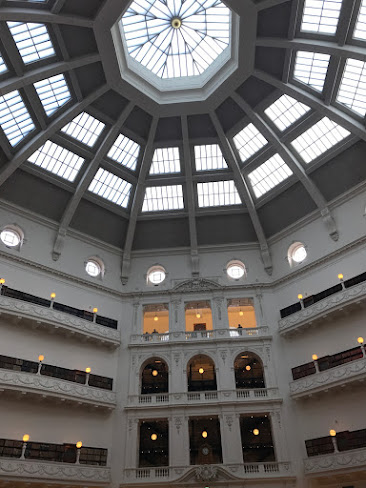 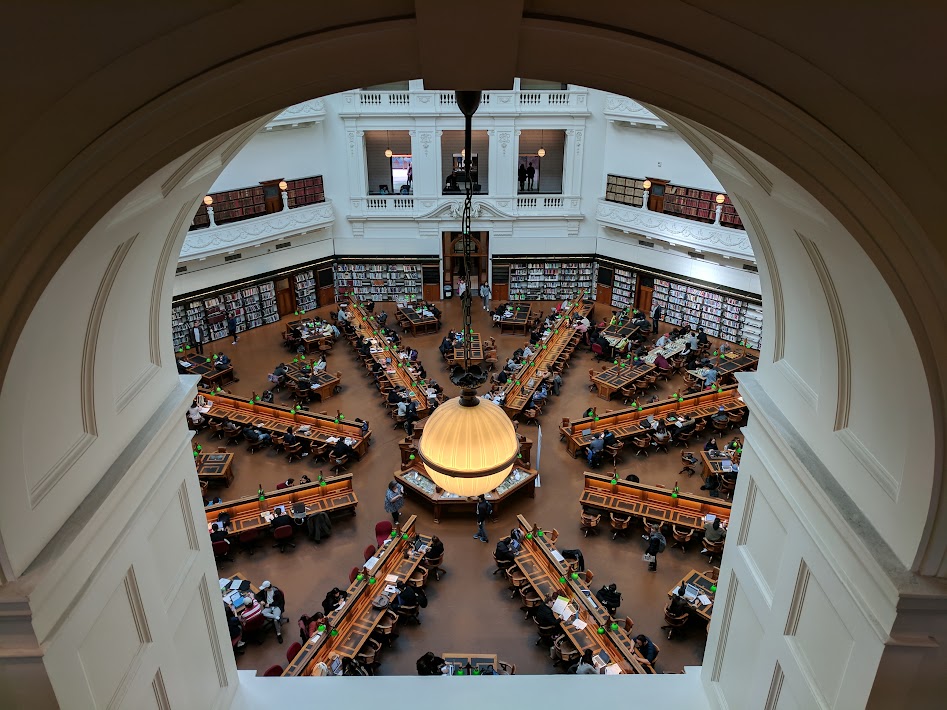 After seeing so many other people working hard at the library, it was time for us to take a break, and what better way than with some tea time?! Back to the Block Arcade we went, to that little tea shop with the line around the corner: Hopetoun Tea Rooms. 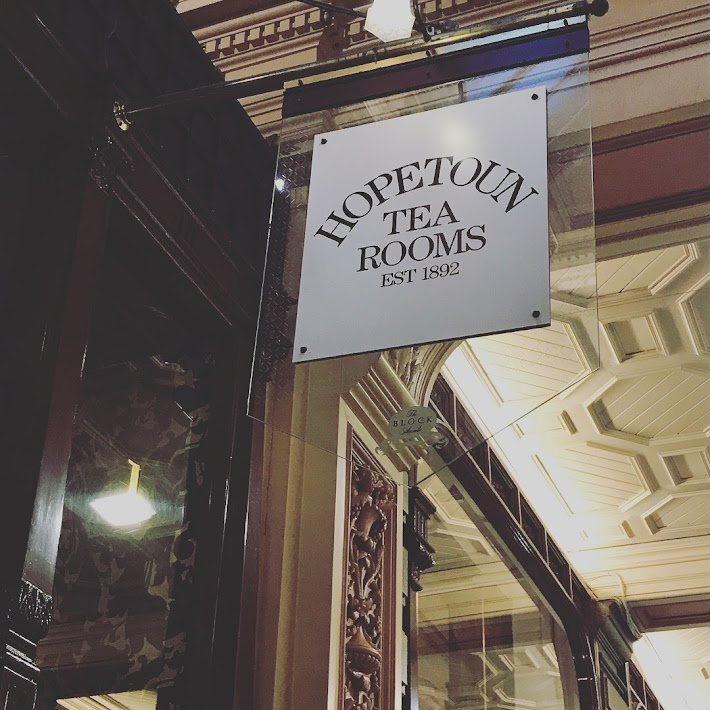 The line was long and slow, but with this storefront, I would wait for as long as it took: 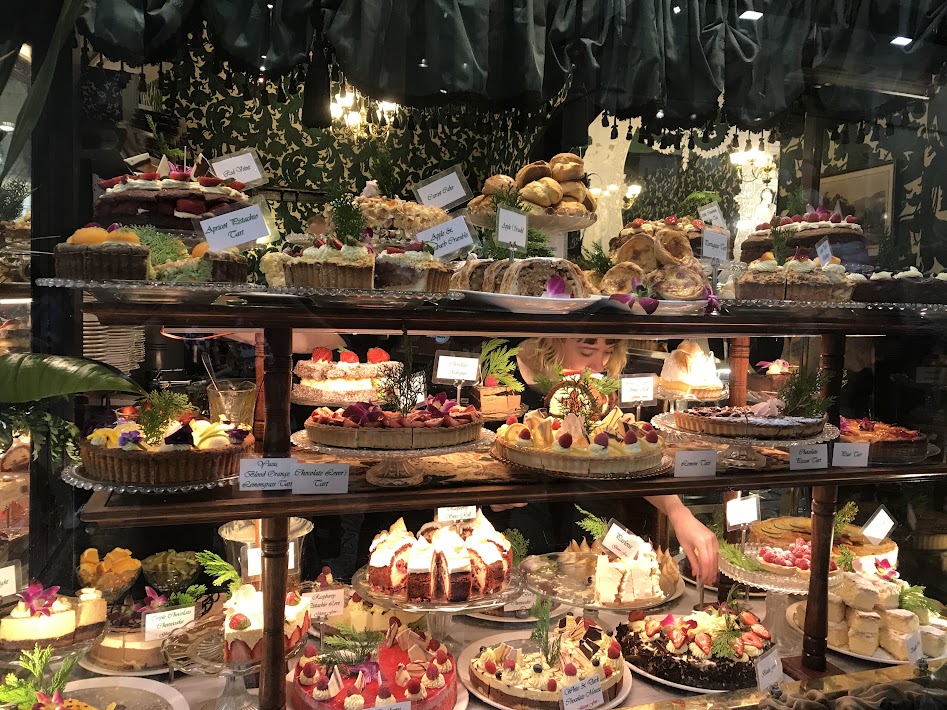 Our wait was rewarded: we were one of the last parties let in! We got a pot of Snow White tea to share, I of course got another lemon tart, and Ben got the day’s dessert special, some sort of chocolate/strawberry decadent goodness. My tart was melt-in-your-mouth good and Ben nearly licked his plate, so I’d say we enjoyed it. 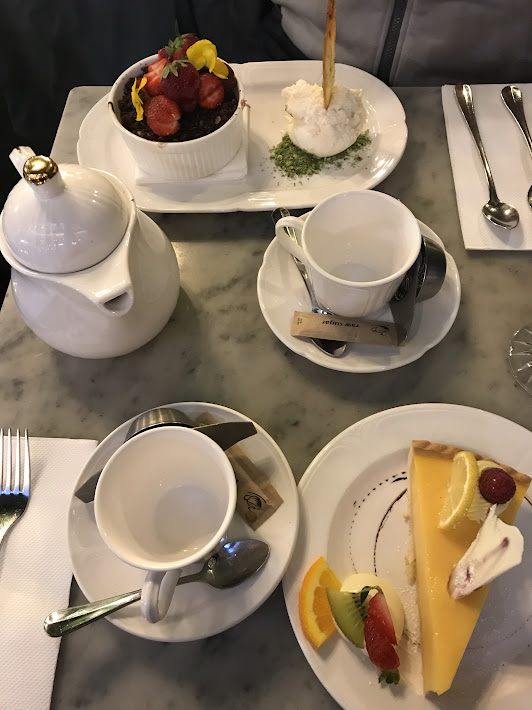 Later that night, we went to SPQR Pizzeria for dinner–my second attempt to find something remotely close to a New York slice. They had good reviews and some said they offer the best pizza in Melbourne. I’m obviously too picky for my own good because while the pizzas were good, they weren’t out of this world. That said…we liked them enough to forget to take the picture until a couple of slices were gone 😂 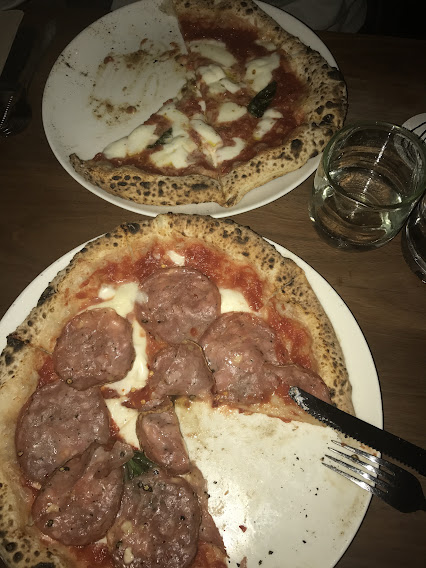 To end our night, at my bequest, we made a stop at the Crown Casino…I needed to fulfill my gambling habit now that I don’t have access to the US lottery 😂 I (read: Ben’s guilty eyes) limited myself to AUD$50 on my very favorite table: roulette! Ben joined me with AUD$20 of his own. Tragically, we lost it all in the end, but it gave us an hour of entertainment which counts for something!

One important note: roulette rules in Melbourne (or Australia?) are stupid–you need to bet the full minimum with a single chip as opposed to be being able to split it across the board (inside and outside are separate, of course). I miss Vegas.

For our last day in Melbourne, we visited the famous Queen Victoria Market. This is officially one of the largest permanent markets I’ve ever seen, if not the largest. They have large areas for seafood, butcher stands, prepared foods (i.e. food stands for lunch), bakery items, and fresh fruits and vegetables, PLUS a massive area for non-food stands (e.g. clothing, souvenirs, art, etc).

We walked around for maybe 2 hours and still didn’t see everything there was to see. Our discoveries of note:

Churros: I’d been craving anything reminiscent of Latin food since we left mainland USA and churros is as close as we’ve gotten since. They weren’t perfect but how wrong can you really go with fried dough covered in sugar? 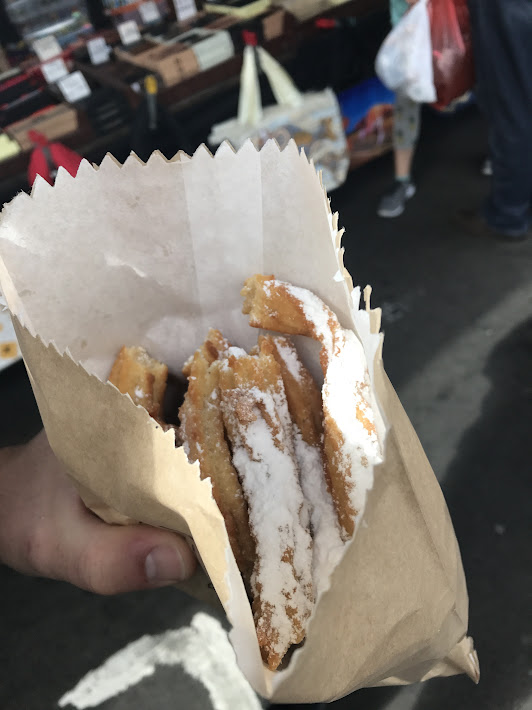 Croissants: We found a yummy-looking bakery stand with reasonably (?) priced croissants and obviously had to get them…YUM. Not quite Luxembourg Cactus good, but good!

Drip Iced Coffee: Poor Ben has been suffering in Australia after being exposed to Hawaii’s magical Kona coffee. I don’t really understand the difference between all of it as I’m not a coffee drinker, but he’d been longing for a drip coffee as opposed to Australia’s typical ‘long black’ (which is apparently an espresso?), and he finally got one from Market Lane Coffee. He was pleased.

Sadly, as we were wrapping up at the market, Ben started to feel a little sick with similar symptoms to what I had in Cairns, so we went back to the hotel to let him get some rest. Fortunately we found a pharmacy (known here as a ‘chemist’? 🤷🏽‍♀️) on the way to replenish my drug supply. One silver lining to Ben’s illness? What better excuse is there for room service?! Between that and catching up on Game of Thrones, our night wasn’t half bad.

And thus our time in Melbourne was over! The next morning we flew to Sydney for our final Aussie leg…more on that next time!