We wrapped up our time in The Land Down Under in Sydney–home to so many of my favorite Finding Nemo references! Here’s what we did:

Day 34: Not all Airbnbs are created equal

We flew from Melbourne to Sydney in the morning and managed to figure out public transport to our Airbnb pretty easily–already Sydney’s public transit system was shaping up to be better than Melbourne’s. Our Airbnb host was unavailable to meet us (he was on an Alaskan cruise actually–something I’d fully recommend after having done it in 2016), so his friend show us up instead. It was lucky for him that he was out of town because I think I would have torn him a new one if he had been there. We got a small studio this time around so we could cook a few meals to save some cash, but the kitchen in this Airbnb was vile. It was old, falling apart (literally, panels were falling off of cabinets and the counter), dirty/sticky, and even had some dead cockroaches in a cabinet to boot. The rest of the apartment wasn’t much better. The pictures were clearly ancient and the people leaving good reviews must be insane. I would have normally contacted the host and figured out a refund or something, but since he was in Alaska, it was a moot point, and we couldn’t find anything else in Sydney for a price we could afford so we had to let it go. It was a rough few days.

Onto better things! After grabbing a few groceries (mostly for quick breakfasts at home + hydration), we spent our afternoon walking around Surry Hills and Darlinghurst, two neighboring areas in Sydney near our Airbnb. We didn’t do much research on these neighborhoods before booking our place–just picked something close to the harbor within our price range–so it was actually really fun to discover that we somehow picked a place in the LGBT area. There were rainbow flags and paintings everywhere and tons of signs regarding Australia’s upcoming public survey regarding the legalization of gay marriage. [This was prominently on the news during our entire time in Australia…looking forward to seeing the results!] We also ended up walking through a bit of Hyde Park that evening: 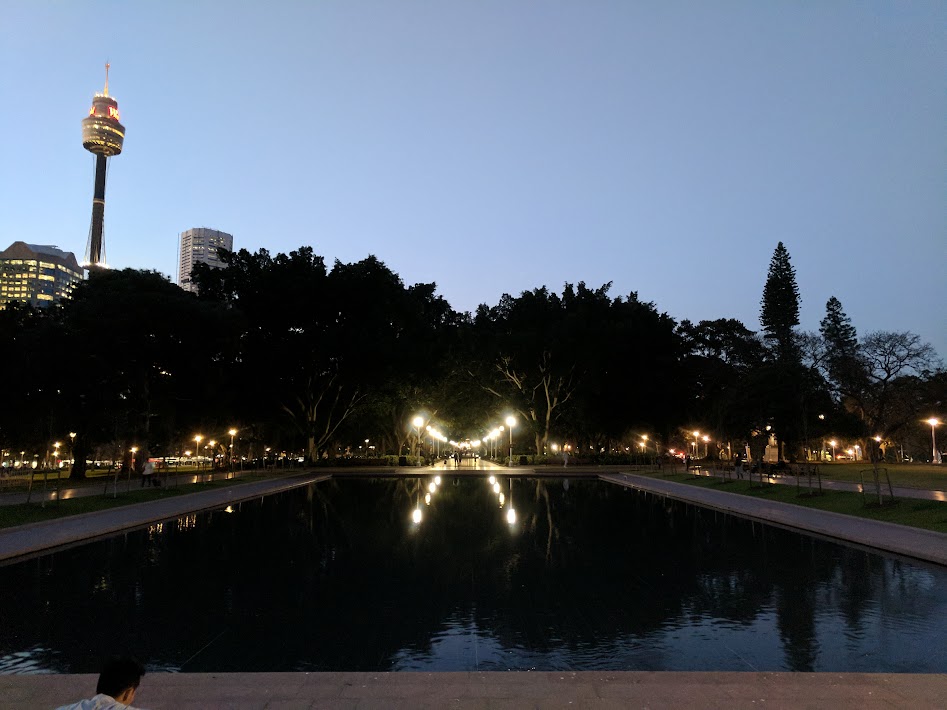 We grabbed dinner that night at Zambrero, a Chipotle-like fast food chain, with the hopes that I would get something even remotely close to authentic Latin food (this trip has brought my bar down to Chipotle level…talk about tragic). I was sorely disappointed. Ben, as usual, enjoyed his. 🙄 We went to Big Poppa’s, a Biggie-themed restaurant/bar, for after-dinner cocktails and it didn’t disappoint. The cocktails were delicious (and expensive but c’est la vie) and the wall decor was fabulous–all pictures of old paintings with famous Biggie lyrics written across the front. Do yourself a favor and check out their site for a peek at the brilliance. 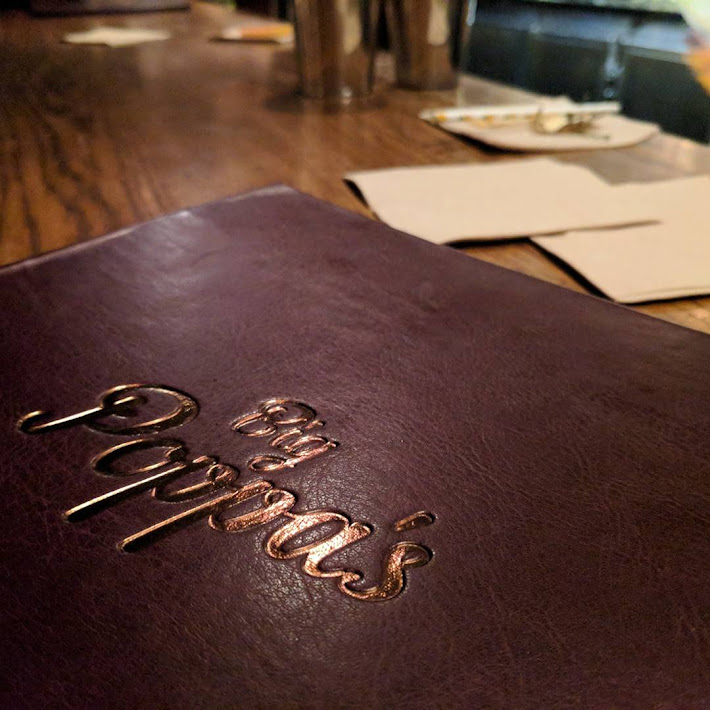 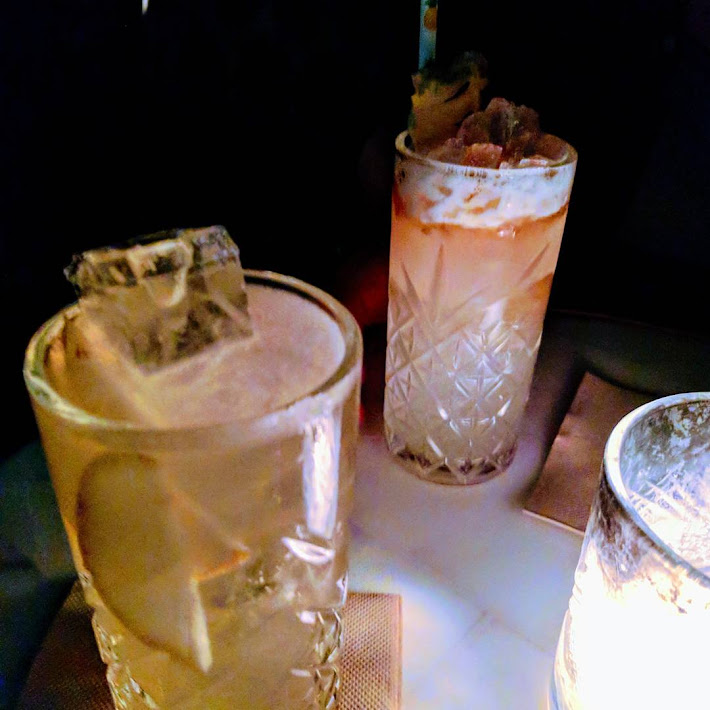 We started our day by heading down to Darling Harbour for a walk around part of Sydney’s famous skyline. 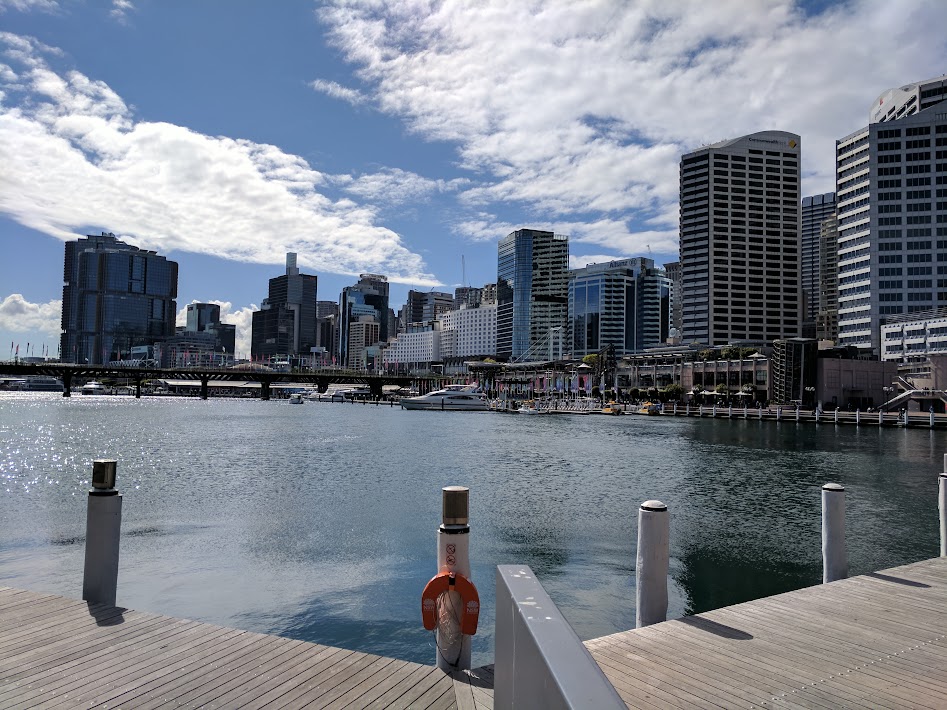 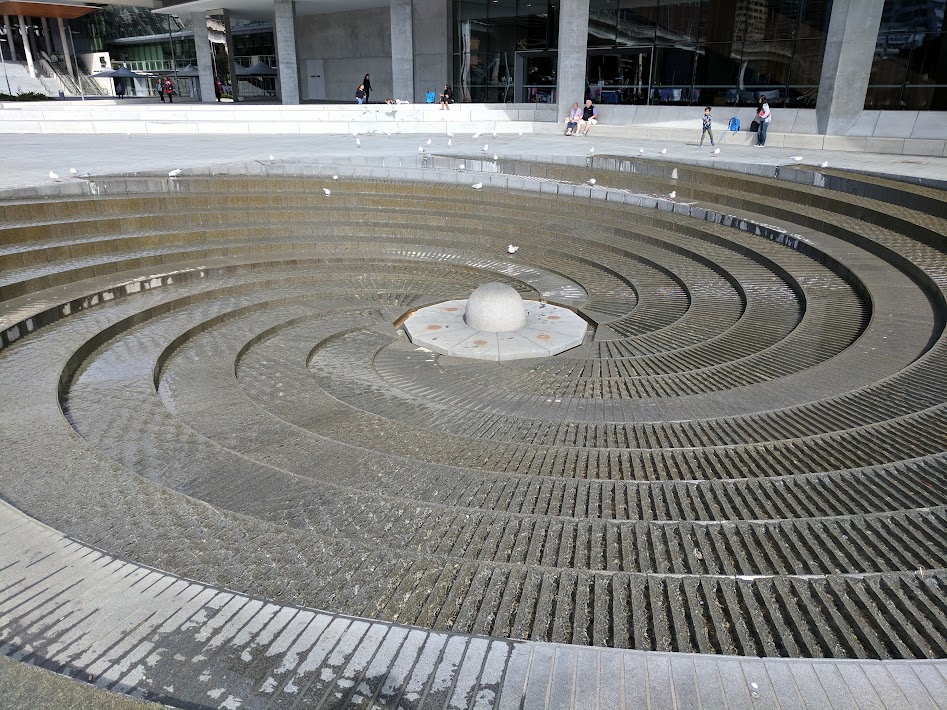 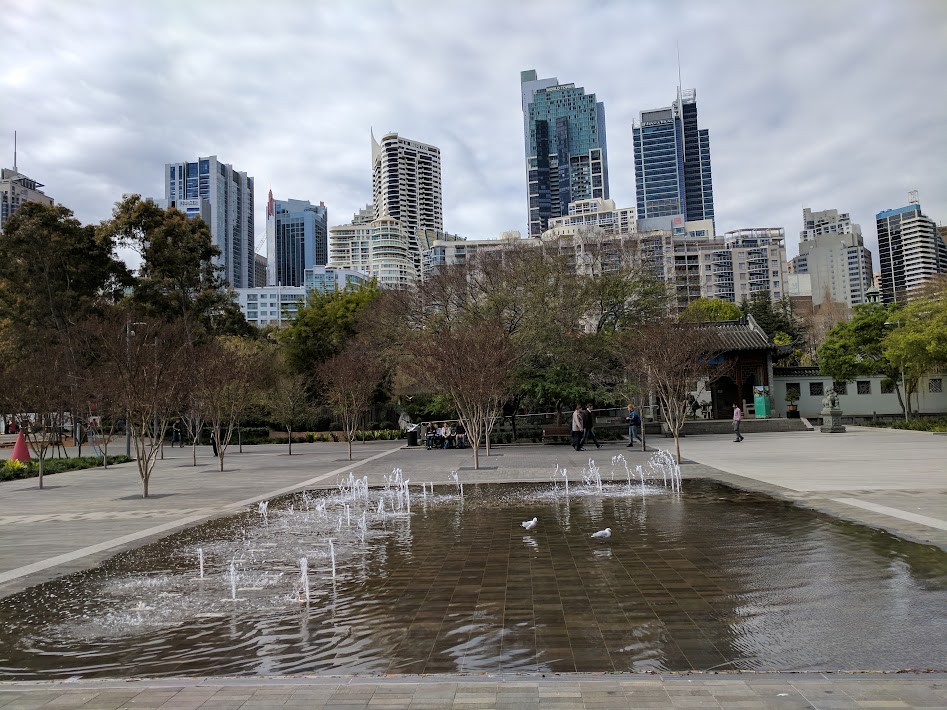 Afterwards we walked through Sydney’s Paddy’s Market, but it wasn’t nearly as impressive as Melbourne’s. There was one very strange wall of merchandise worth noting:

It was time for lunch and we had a hard time finding something nearby, with good reviews, that sounded appetizing, so we slowly made our way to our next stop with the hopes that something would pop up along the way. Long story short, we found a small cafe with decent reviews and decided to try that, and I instantly regretted it so hard that I left my very first 1 star Google review. Tragedy. Fortunately there was another coffee shop next door where Ben got a coffee and I found a delicious croissant to erase the terrible memory.

Next up: The Powerhouse Museum! This is generally a well-reviewed museum and the permanent exhibits that we managed to see were good, but we spent most of our time at the temporary Sherlock Holmes exhibit and had way too much fun playing detective. I think it’s a traveling exhibit, so keep an eye on their website to see where it’s going next and pay a visit if you can! 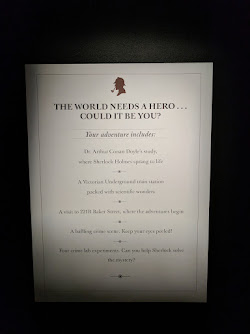 Ever since we started this trip, I’ve been missing my little Khaleesi quite a lot. We try to FaceTime with her but she doesn’t really get it 🙄 To help me cope, Ben discovered a cat cafe in Sydney! So obviously we went. I really wanted the kitten room but it was a bit more expensive and we need to save where we can, so we spent an hour with the adult cats instead. They were so cute! A couple were (adorable) old grumps or skittish, but most of them warmed up and one ended up on Ben’s lap! (Shhhh, don’t tell Khaleesi.) 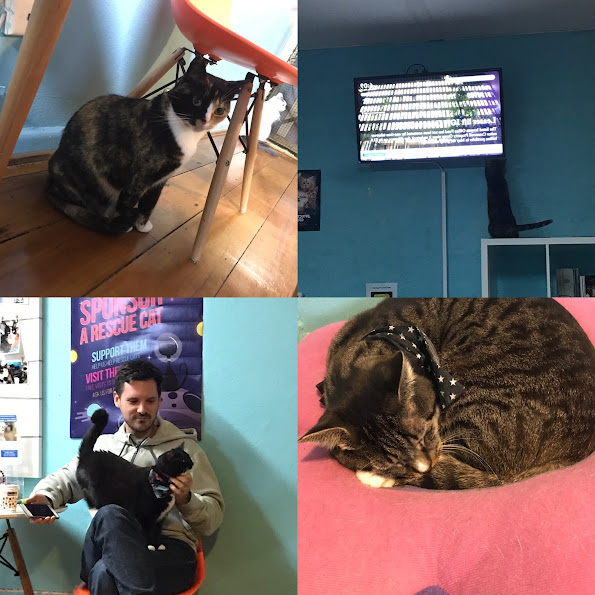 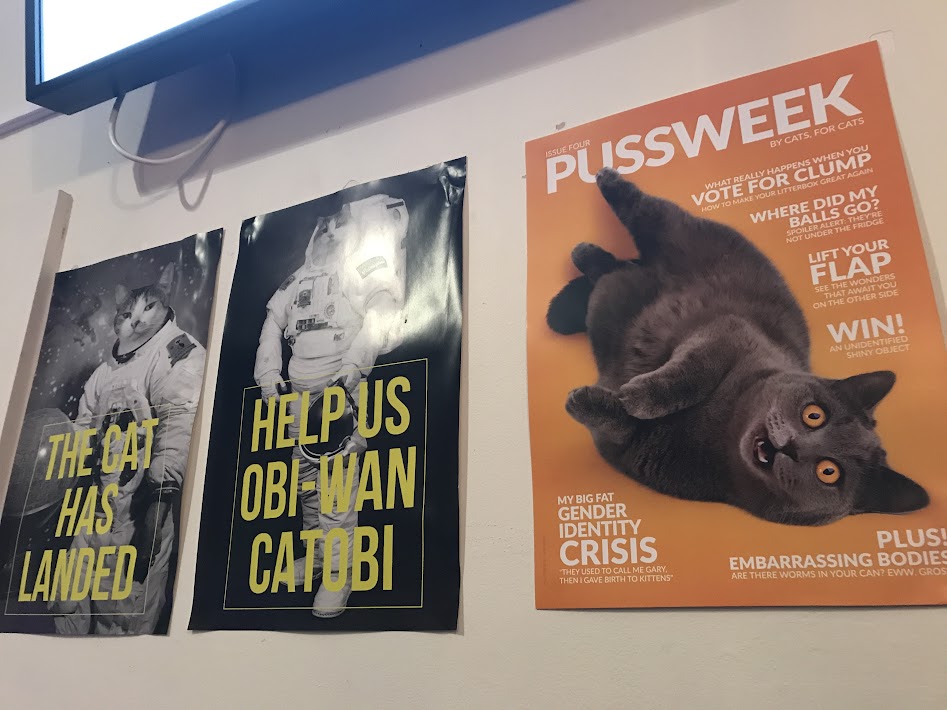 After cat cuddles, we stopped for dinner at an absolutely fantastic find: Fonzarelli’s. This meal, by far, is the closest I’ve felt to being home since we left mainland USA. The ambiance was cool, the music was catchy, the drinks were delicious, and the food was even better. We got the Ralph Malph appetizer, the Potsie Weber (Ben), the Chachi (me), plus “The King” for Ben and a margarita for myself. I didn’t think it was possible to find authentic buttermilk fried chicken outside of the Southeastern US…I was wrong. After this, I wrote my very first 5 star Google review. 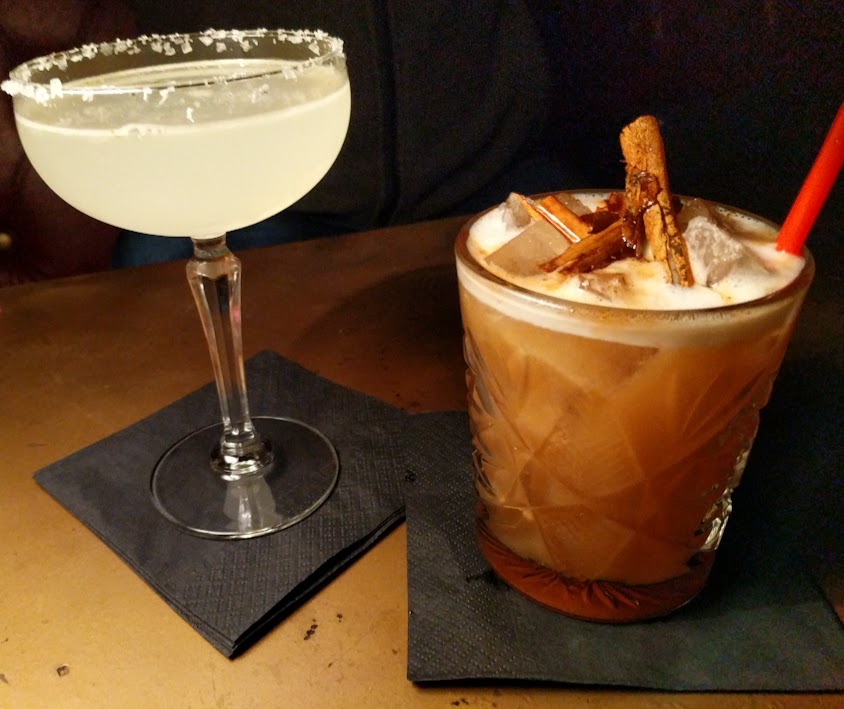 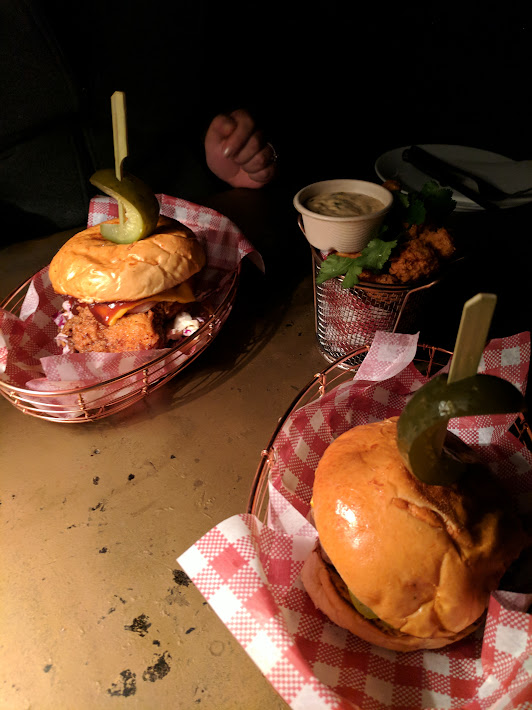 Day 36: Vikings have the most fun

This time we went down to the other side of Sydney’s harbor to enjoy views of their famous Opera House and Harbour Bridge. 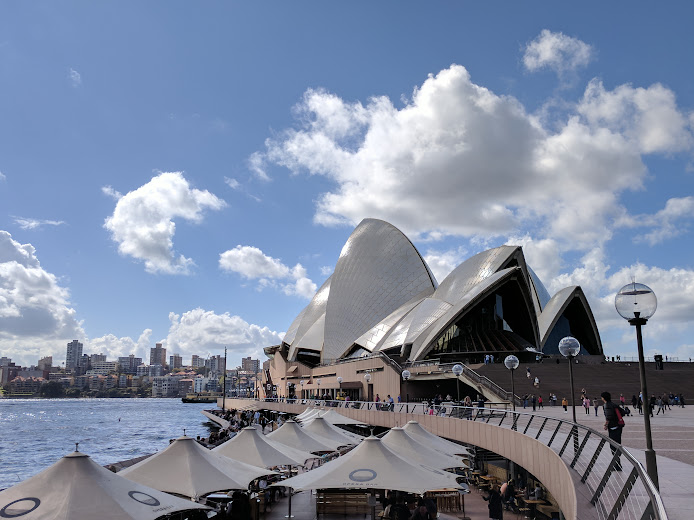 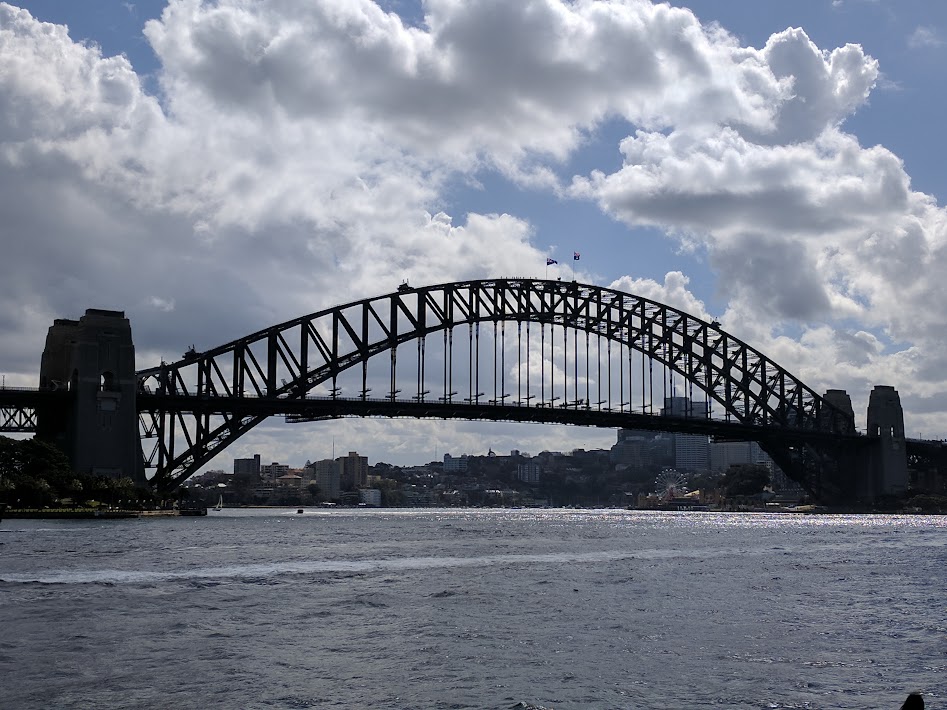 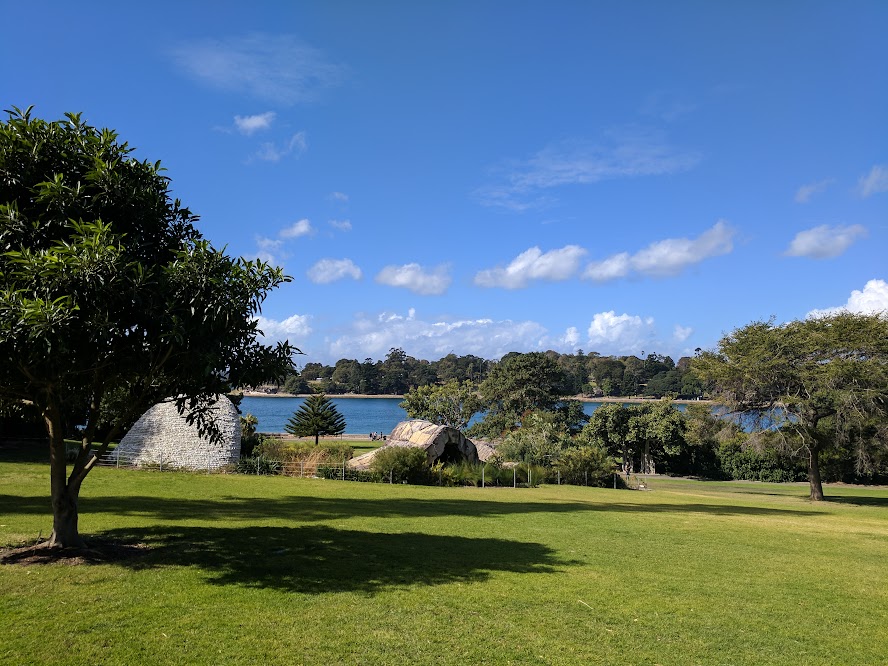 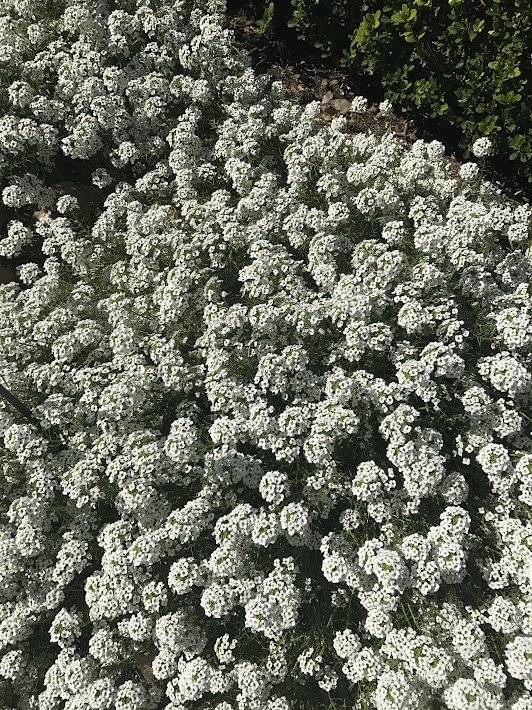 We managed to find an enclosed food court in the middle of the city for lunch. Ben went for a Dig Inn-type place (for non-NYC residents, Dig Inn serves what I call #froofy food, e.g. kale, quinoa, organic roasted blahblahblah), and I tried Guzman y Gomez, another Mexican fast food chain with my hopes high after hearing the cooks speaking Spanish in the kitchen. Sadly, the spoken Spanish is where the authenticity ended…the flavors just weren’t right 🙁 Of course, Ben loved his froofy stuff. At least one of us found their heart’s desire. #dramatic

Afterwards, we took a stroll through the Queen Victoria Building to check out the architecture (and see if I could find another scrumptious lemon tart, my new favorite thing). No tart, but the building is quite beautiful: 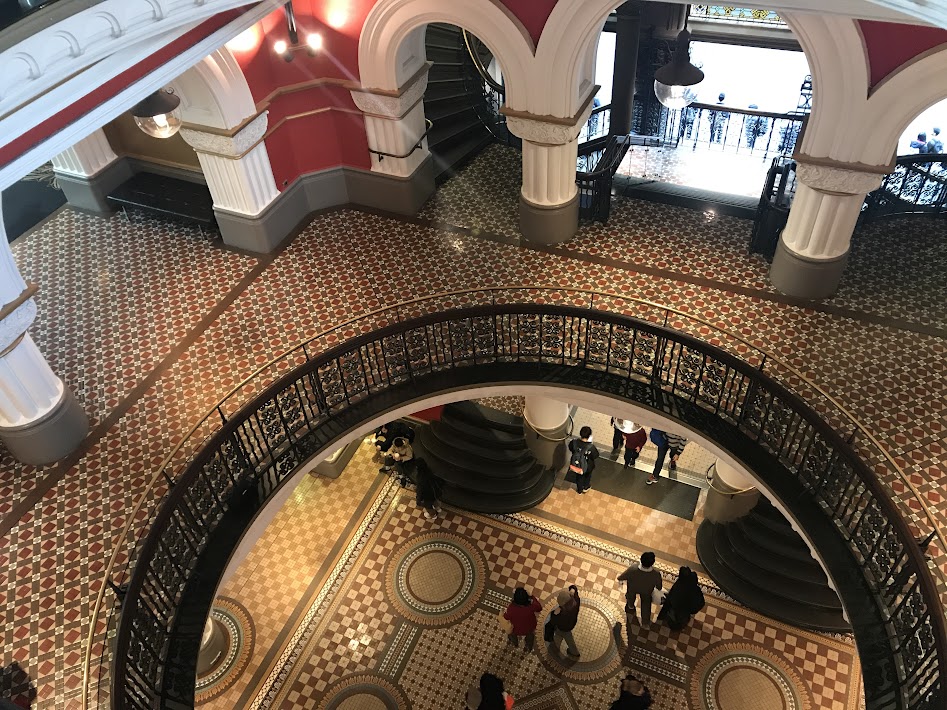 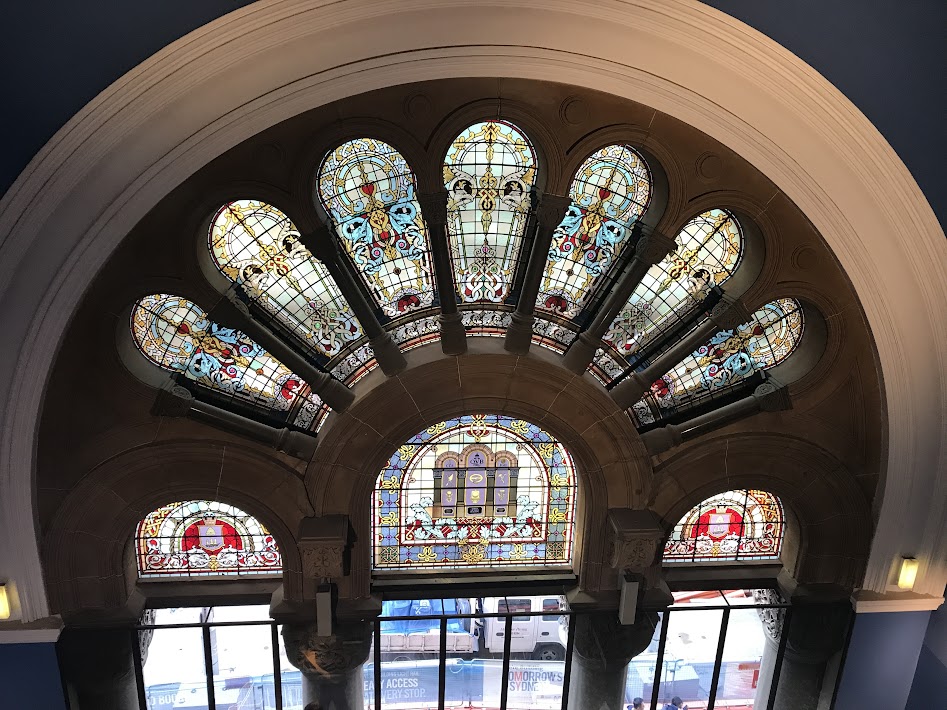 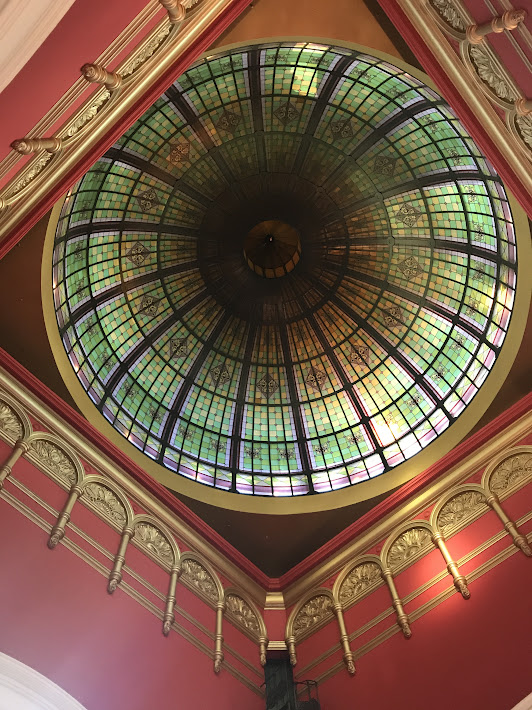 After another walk through Hyde Park on the way back towards our Airbnb, we realized that we had enough time before dinner for a little grooming, so I went for a manicure (my way too expensive mani from Hawaii was literally haggard) and Ben went for a haircut. 💅🏽💁🏻‍♂️ It wasn’t easy to find a place that was open with decent reviews, but I did manage to find one and the price wasn’t half bad! Ben’s $30 haircut included a hot towel at the end, so he was pleased too. Extra brownie points for you, Sydney.

Finally, it was time for dinner! I managed to reconnect with Tatiana, an old friend from graduate school (ah, the wonders of Facebook), who is currently living in Sydney so we met up with her and her husband Daniel at Mjolner, a Viking-themed restaurant in Surry Hills. It was quite the experience, and the food and company were even better. Fully recommend!

Day 37: Nothing, nothing, and nothing

As you may have already guessed, we did nothing of substance. Well, to be fair, we did laundry, but otherwise we did nothing. Sleep in, watch TV, read all day…a necessary lazy day.

We started our day early, with a classic Sydney ferry ride and got some great views of the Opera House: 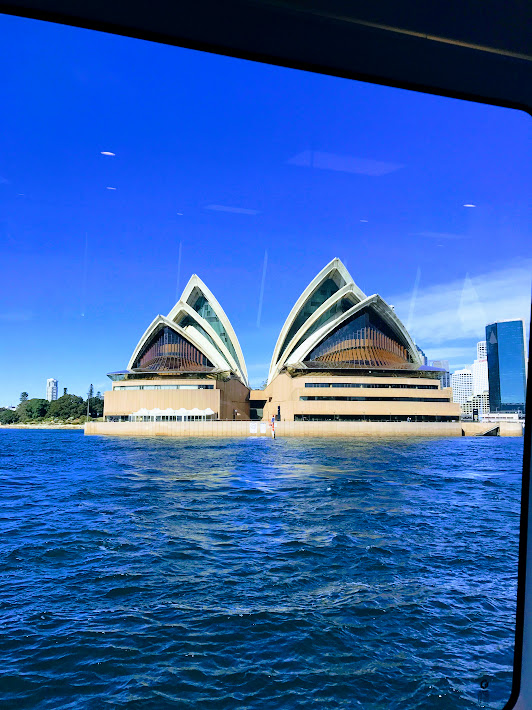 First stop: Sydney’s Taronga Zoo. We got to take the SkySafari from the ferry stop up to the top/start of the zoo and then slowly worked our way back down. It was a great zoo! Saw lots of cute animals, Ben will post tons of pictures soon. My favorite part? The brand new baby elephant–just 12 weeks old! I died. 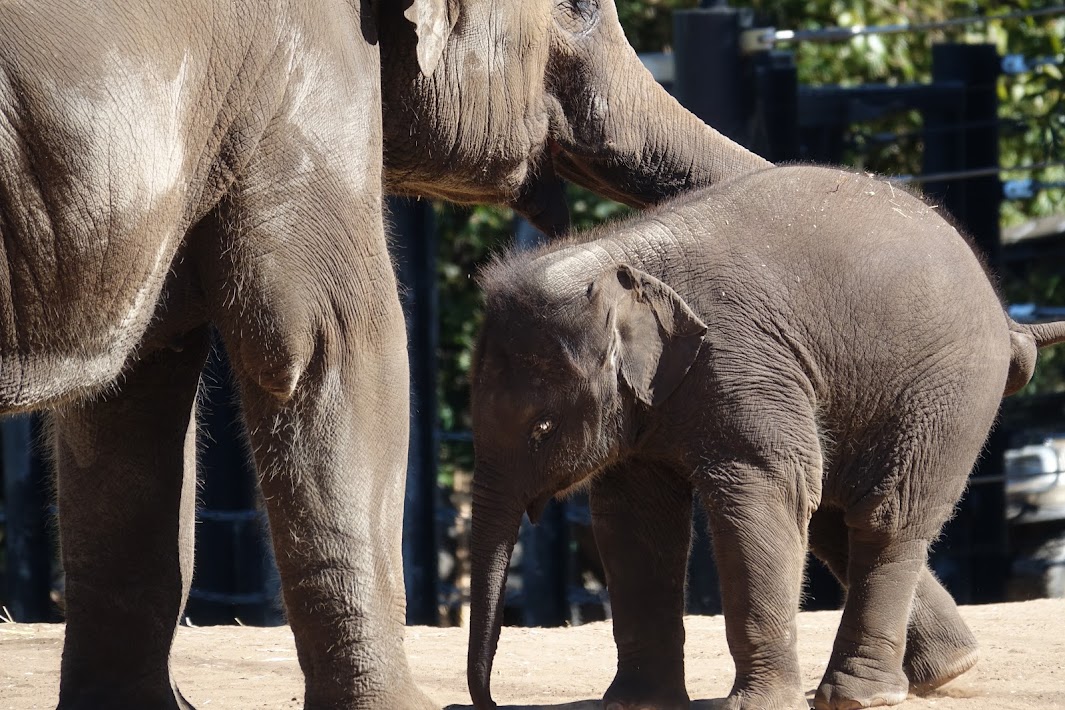 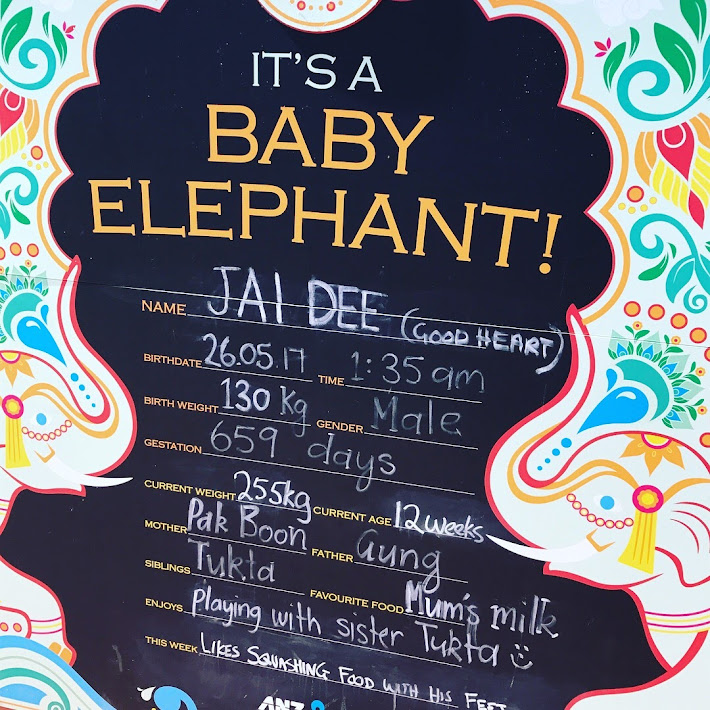 My one complaint? (Almost) No big cats! They had a brand new tiger exhibit (with an extra charge 😒) but the line was so obscene that we didn’t bother…but no lions, no leopards, nothing! Never had that happen at a zoo before. I suppose they’re forgiven since they DO have lots of animals we don’t normally see elsewhere–like Tas devils!

After the zoo, we took the ferry to Quarantine Station for a visit. Really quite interesting, fully recommend a stop here. On top of being a learning opportunity, it’s got a great beach! Way too cold for us to enjoy but something to do in warmer weather for sure.

We ended the night with dinner at Sake Restaurant & Bar with James and Maika, a couple we didn’t actually know but who knew a friend of Ben’s…so basically we went on a blind double date 😂. This place was #fancy and our meal was even fancier–the couple knew the chef and we got the special treatment. I couldn’t eat half of the dishes because they served mostly seafood, but what I did eat was delicious and the drinks were good to boot. The bill was obscene but it’s best to just forget that now! Here are some (yes, just some) of our dishes: 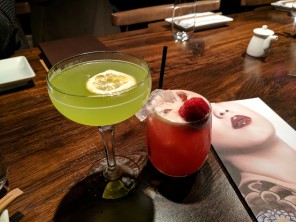 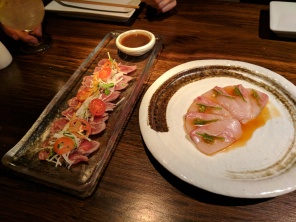 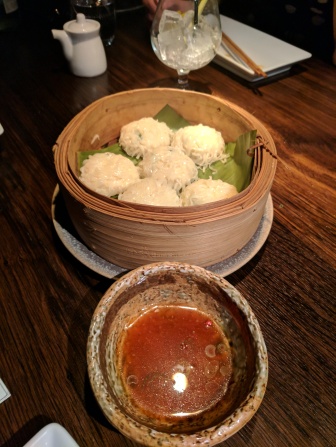 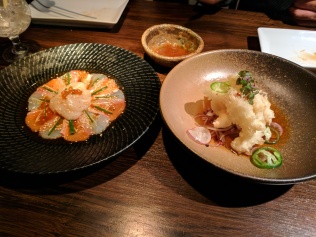 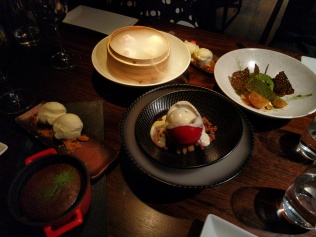 For our last day in Sydney, we went out to Bondi Beach

, a popular beach just ~40 minutes outside of the city via bus. It was a sunny day, though very windy and a bit chilly. In fact, the wind was so strong that the waves were massive–like 10+ feet! It was incredible to watch and helped solidify my very logical fear of the ocean. 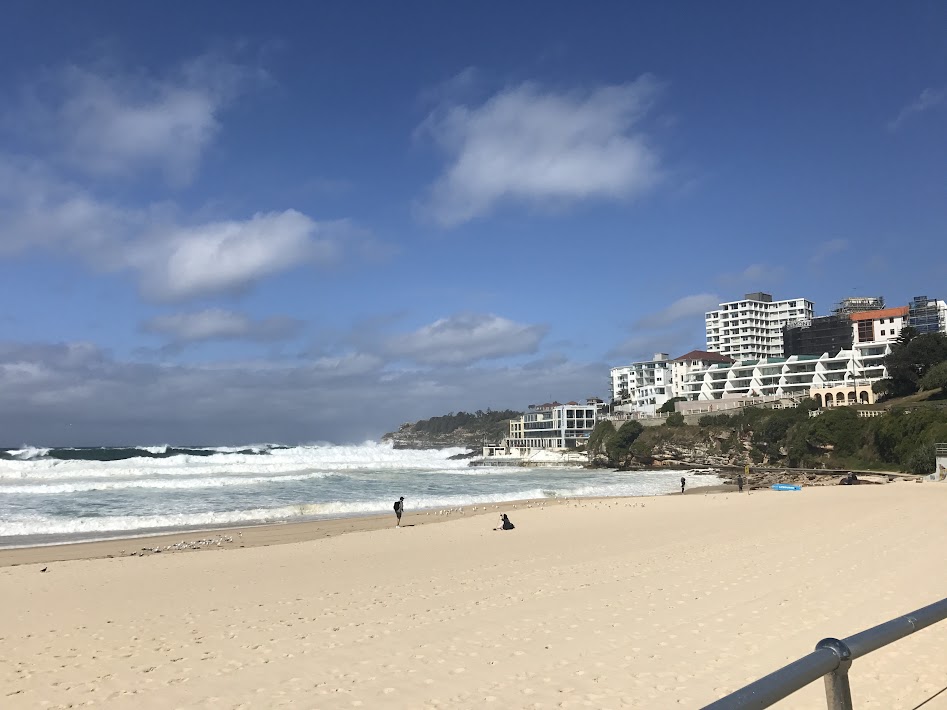 We grabbed lunch at Speedo’s Cafe right across the street from the beach and had some delish open-faced sandwiches: 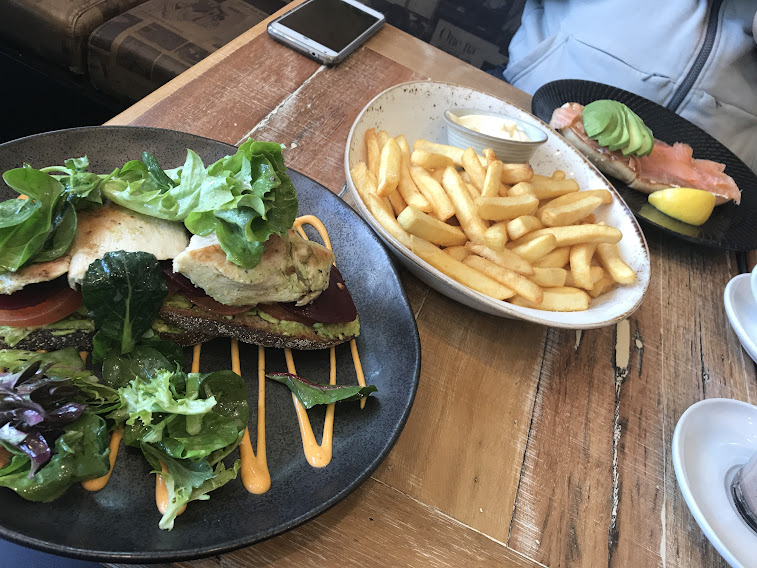 After some more time at the beach, we eventually made our way back into the city for some more high tea action–I can’t get enough of this wonderful British invention! This time we went to The Tea Cosy, a cute little place with some of the best scones I’ve ever had. Go here for a good deal on deliciousness!

Sadly, this marked the end of our time in Sydney. We spent the rest of the night packing up as we had an early flight to New Zealand the next day…more on that soon!

One thought on “42 Wallaby Way, Sydney!”