After 3.5 weeks in Australia, it was time to visit its frenemy, New Zealand! Our path of travel was as follows: Queenstown, Wellington, Rotorua, and Auckland. [We picked this direction (South Island to North Island) because of future flights (all of which are best routed via Auckland).] Here are our adventures from Queenstown and Wellington!

Day 40: Queenstown: one of the most beautiful places you’ll ever see

We flew from Sydney to Queenstown on Qantas, which meant access to their super swank International First Lounge because of my current oneworld Emerald status. And what does this mean? An a la carte breakfast with waiter service…I kid you not. [This status situation is ruining me for life. I need to win the lotto ASAP.] Ben and I both had very hearty breakfasts and then made our way to our gate for the flight, which was perfectly uneventful. The views towards the end (once we were over New Zealand) were gorgeous–I wish we had thought to take a picture, but I was too busy ogling.

After checking into our Airbnb (a massive improvement from the last one!), we walked around town in the afternoon. It was chilly enough that our sweaters weren’t cutting it, so we bought some touristy winter hats for $5 out of a sale bin–score! Eventually we made our way to the Skyline Gondola, which takes you up to a clifftop in Queenstown where you can dine at the Stratosfare Restaurant and catch some amazing views. Our dinner reservations weren’t until 8pm but we went up early to catch the sunset (I think you all have noticed how much Ben loves his sunrise/sunset photos). The views were incredible, and photos don’t really do it justice. [I would like to add that the gondola ride was fine but if you’re scared of heights, it’s best not to look up or down. 😫]

It got cold enough that we decided to head inside and enjoy the views over a pre-dinner drink. Ben had a cider and I had a kiwi martini to celebrate our NZ arrival. It was so delicious! Dinner was buffet style and yummy, though there was a lot of seafood so my options were a bit more limited than Ben’s. The views were nice (we paid extra for the window-side seats) but we had a similar problem to what happened in Melbourne’s Eureka Tower–the lights inside were too bright and made it difficult to truly enjoy the views given how dark it was outside. In retrospect, the earlier dinner slot (6pm) would have been much better.

On our first full day in Queenstown, we made the trek to Milford Sound, New Zealand’s famous fiord with beautiful mountain ranges, waterfalls, and more. We got a rental car for the trip and given the cold weather, we upgraded to the 4WD SUV just in case. What I learned when picking up the car? Apparently NZ has a law that requires you to carry snow chains with you if you’re traveling to Milford Sound given potential road conditions 😳 I rented the tire chains and started praying that we wouldn’t have to use them (thankfully, we didn’t).

The drive out there is ~4 hours, despite looking much closer on a map–but that’s because you have to drive around all the mountains! The views along the way were gorgeous: 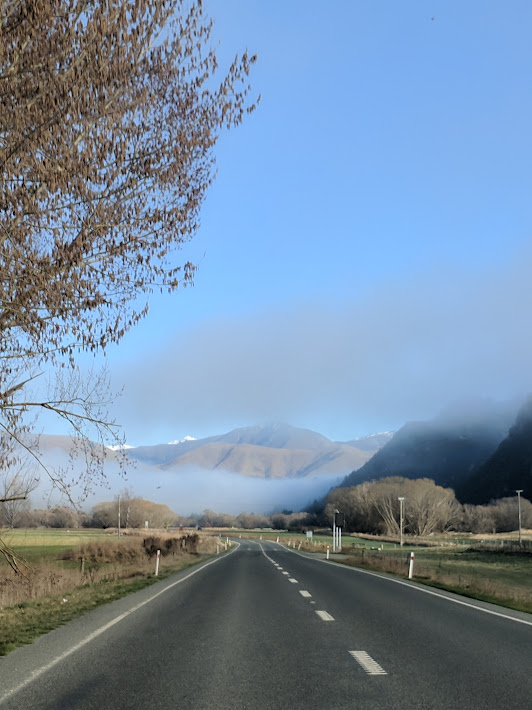 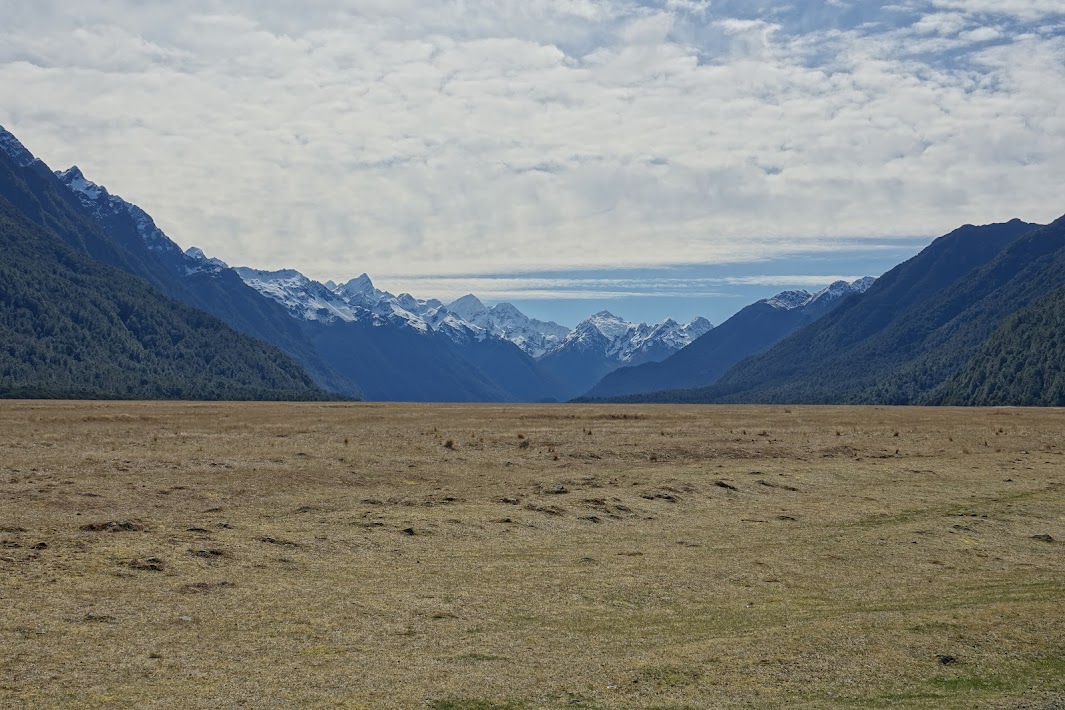 We stopped in Te Anau for lunch (because really, there’s nowhere else to stop along the way) at The Fat Duck. We forgot to pictorially document our meal (😱) but Ben had the Pulled Pork Burger and I had the Chicken, Bacon, Avo ‘Sammie’ and both were delish. The views on the second half of the drive only got better: 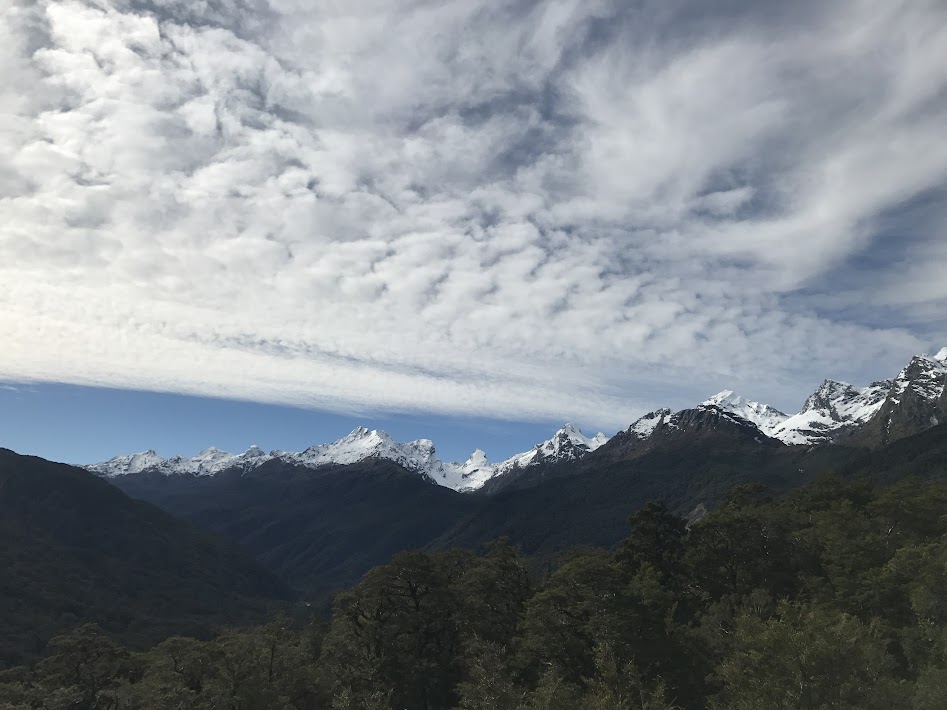 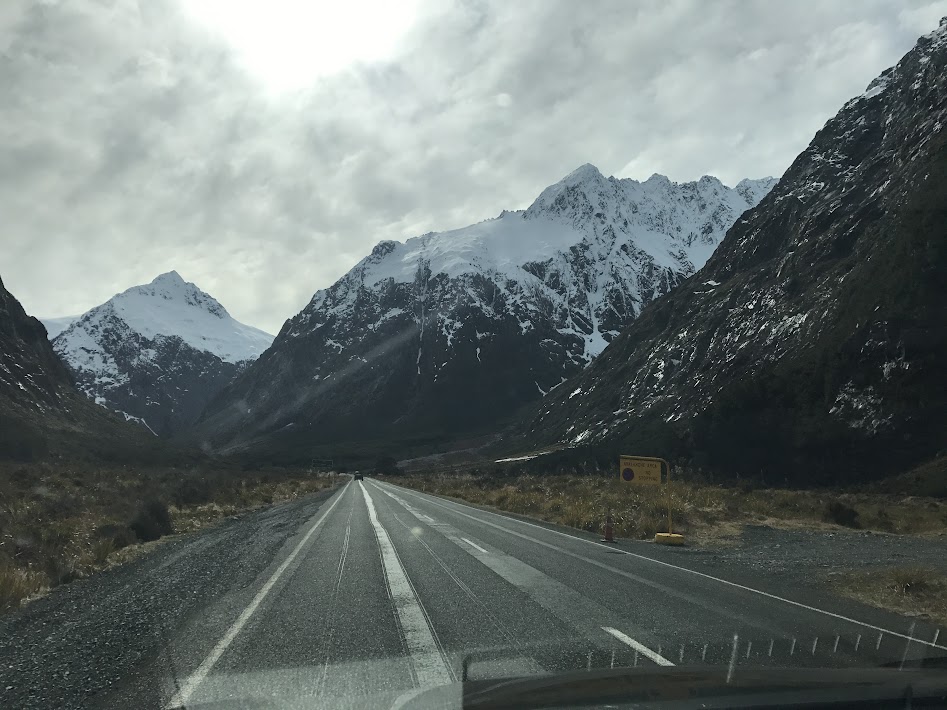 Once we got to Milford Sound, the actual cruise was fantastic too. Our cruise was with Mitre Peak Cruises, and since it’s off-season, there were a total of 9 people on our boat, including 2 employees (these boats are large enough to normally fit ~40 people)! It was so great to not be on a crowded boat–made the experience even better. There are too many pictures of everything we saw, but here are some of my favorites: 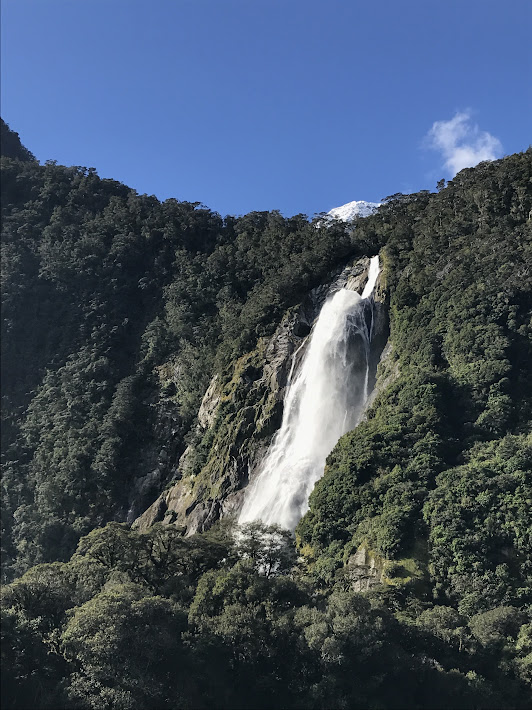 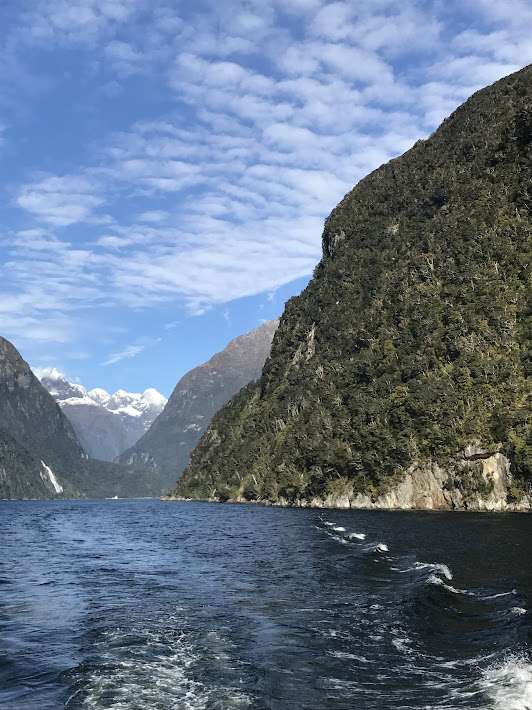 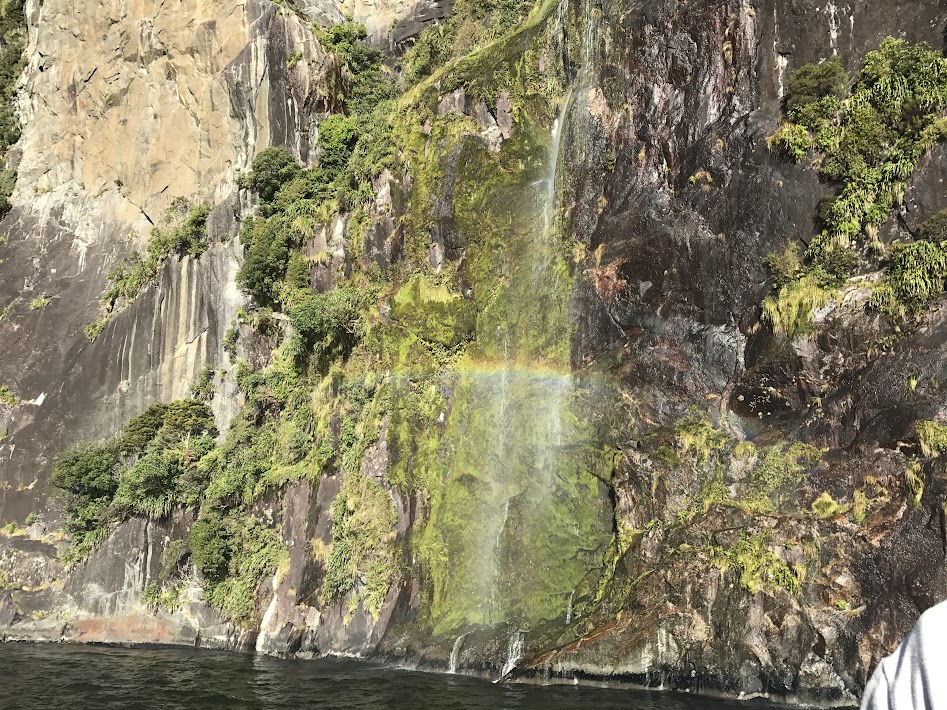 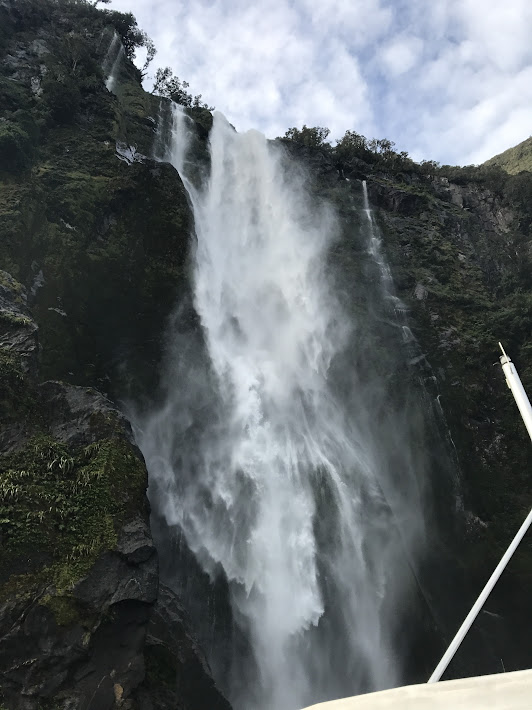 On the way back we stopped in Te Anau again, this time for dinner at La Toscana Pizzeria–one of the Mitre Peak guys recommended it. Omg…it was SO good. Ben got the Cocaina Pizza and I got the Nonno Pasta. I’m salivating just thinking about both dishes as I write this. 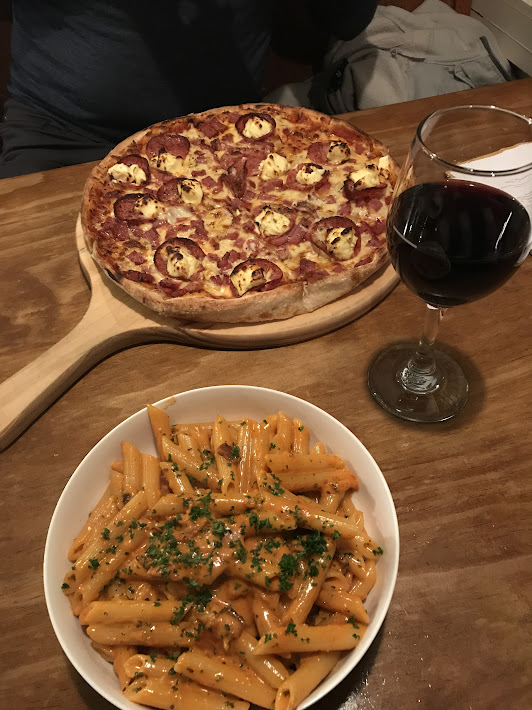 Day 42: The cave, the church, the wool shed, and the container

For our (already 😭) last day in Queenstown, we went on a wine tour. To avoid getting drunk within one tasting (we can’t be promoting American stereotypes!), we had a hearty breakfast at Joe’s Garage first. Ben had The Joker (a giant bratwurst to feed his Luxembourgish homesickness) and I had the Pikelets with bananas & bacon (I had to Google it too, don’t worry). Yum, yum, yum. 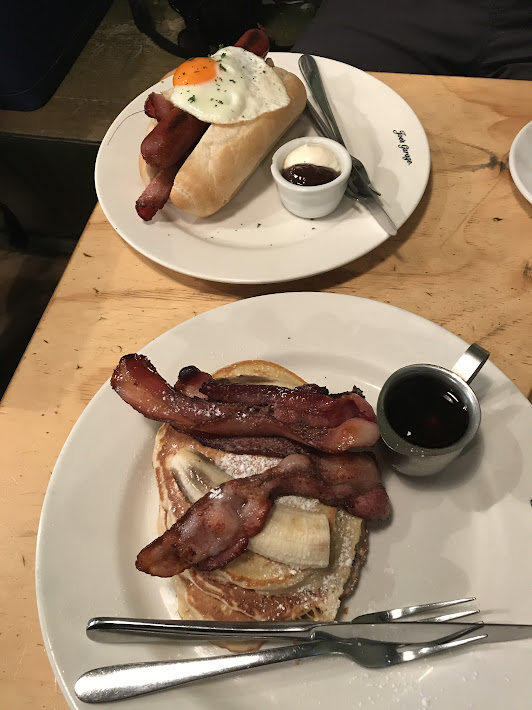 We had a couple of hours to kill before the tour started and I had stupidly left my Kindle at our Airbnb, so I convinced Ben to go hangout at the public library so I could keep reading my book while we waited 😂 Eventually we met up with our tour group and were on our way to explore the wines of Central Otago!

First stop was Gibbston Valley Winery, aka ‘the cave’. A guide gave us a brief tour of the vineyard and wine cave and then walked us through a wine tasting–very yummy. We also had some lunch here, as there wouldn’t be an opportunity for food for the rest of the tour. Ben and I shared the Vintners Platter as well as a bowl of the soup of the day, of which I wish I could remember the ingredients because it was 👌🏽. 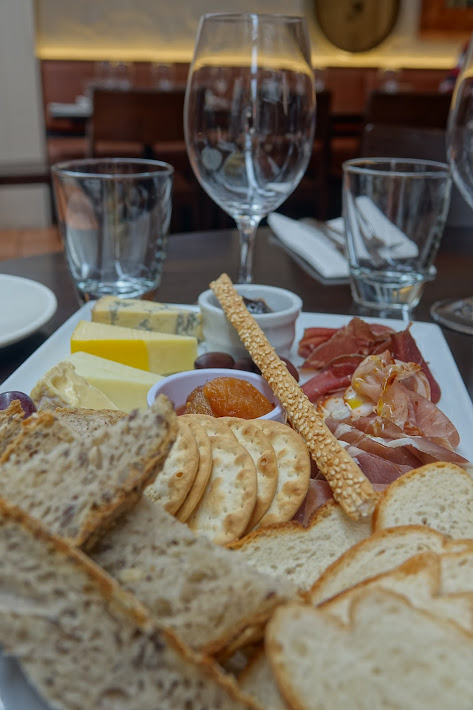 Next stop was Waitiri Creek Wines, aka “the church” because the tasting room is an old church. So really, this wine tasting was basically like communion.

Next up: Mt. Rosa Winery, aka “the wool shed”. Why? Because the vineyard used to be a sheep farm and the tasting room is, in fact, the old wool shed.

Last stop: Akarua Wines, aka ‘the container’. I think the picture explains this one pretty well:

We were dropped off downtown after the tour, so we figured we’d have an early dinner and then head up to our Airbnb (I was only climbing that death hill ONCE). Our new tour buddies said they would be going to Pog Mahones, an Irish pub, for drinks/dinner later that night, so we went a little earlier to get things started. It was quite delish! Ben had the tasting platter stonegrill (lets you cook your own meat!) and I had the burger, with the hopes that NZ would fill the burger needs that Australia could not–and indeed it did! It wasn’t exactly like an American burger, but it was pretty damn close. This was another meal that we forgot to photograph…blasphemy.

Sadly, we had to leave Queenstown too soon. [Perhaps even sadder was the fact that I woke up with a sore throat, which is always the first sign of an oncoming cold for me. Wompwompppp.] We were headed to Rotorua next, but first we had a ~12 hour layover in Wellington, NZ’s capital. Our flight to Wellington was uneventful, but there’s one thing worth noting…no one checked our passports in Queenstown (not at check in/bag drop off, not at security, not at the gate). It was the strangest thing ever when coming from a country like the US that obsesses over ID checks before every flight.

Anyway! Once we landed, we realized we were back in the land of Uber (yay!) and took one to our Airbnb to drop off our things. Once we got there, I decided I would try to rest a bit and let my cold drugs take effect while Ben explored Mount Victoria (our Airbnb was close by). He did manage to catch some pretty amazing views of the city:

Once he was back, we made the trek down to Wellington’s famous Cuba Street to find some grub. Eventually we settled on The Flying Burrito Brothers, as it had the most authentic sounding Mexican food (note I said ‘sounding’ because by now, I’ve given up on true authenticity). Ben had the veggie burrito and I had the chicken tacos, which basically turned out to be spicy fried chicken chunks with some pico de gallo and chipotle mayo in a tortilla–in the end I was right, it wasn’t very authentic, but it was tasty! (Except for the rice and beans…those were kind of terrible. What a tragedy.) 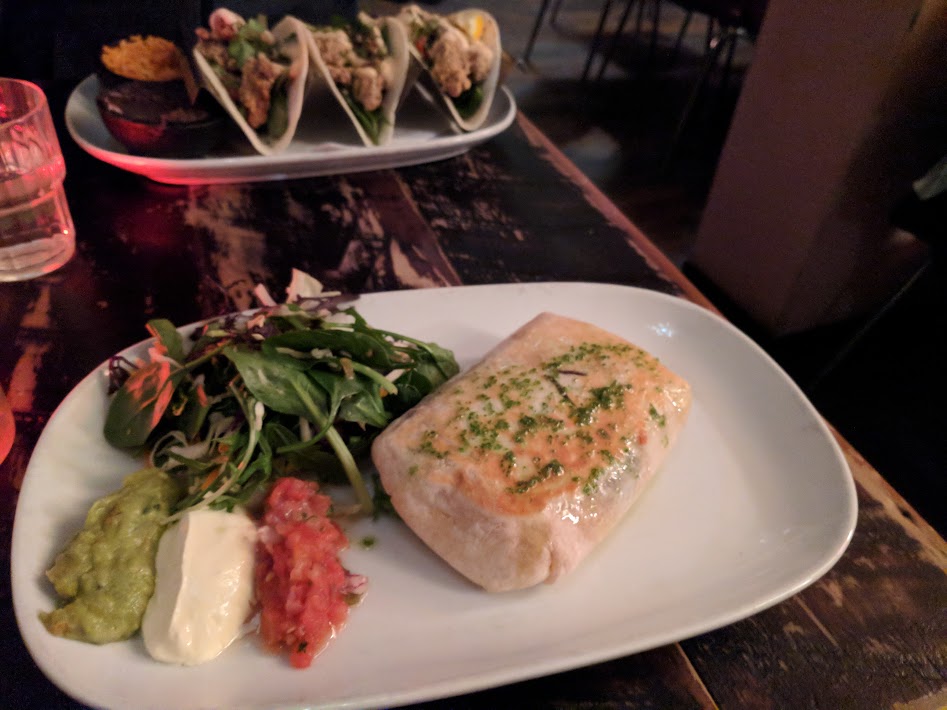 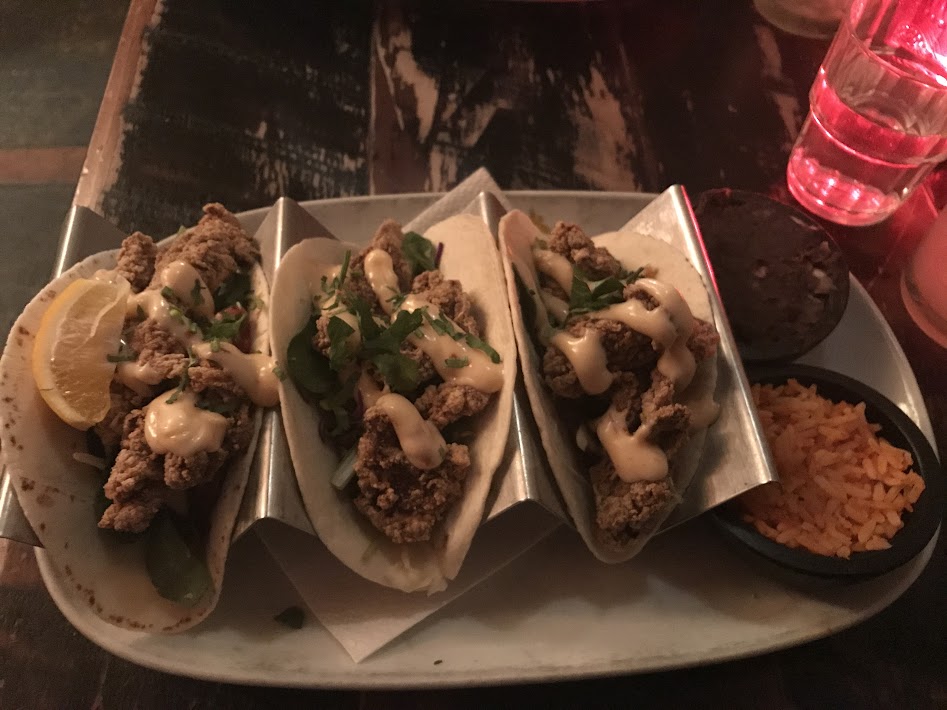 It was an early night in after that, as our next flight to Rotorua was at the ungodly hour of 7am–more on Rotorua soon!