The second leg of our flight to Rotorua left Wellington at 7am, so it was an early morning 😫 Once we did make it to the airport, yet again we never had our IDs checked…so strange! Oh well. At least Ben had fun nerding out at the airport while we waited for our flight. 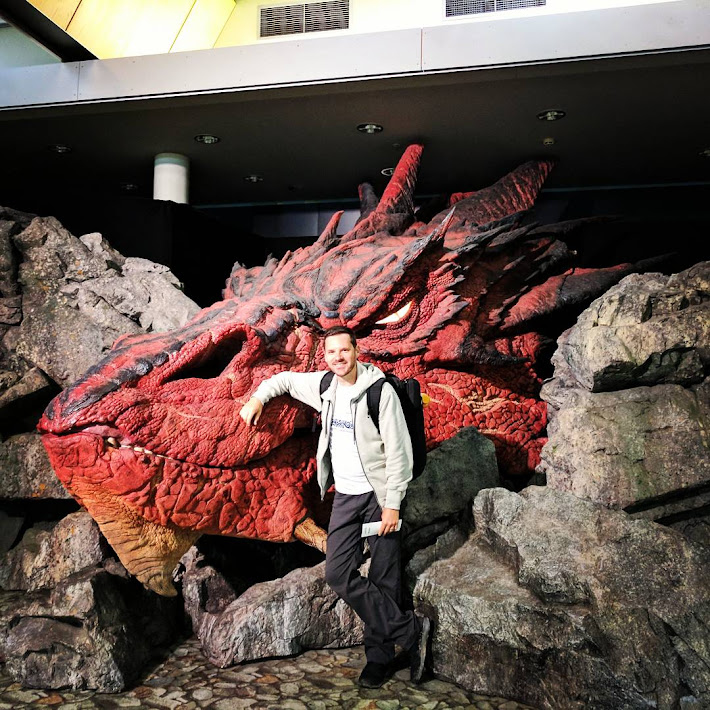 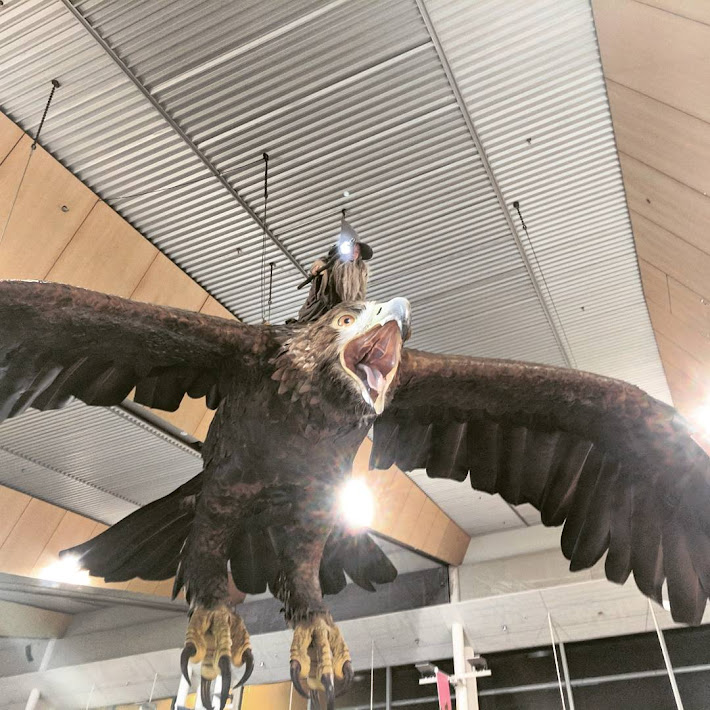 Our flight was actually quite smooth which was unexpected given the rainy weather, even the landing went well. Of course, once we were off the plane, the rain got even worse and we sat in the airport trying to figure out what to do–we were way too early for our Airbnb check-in and the Rotorua airport is the saddest little place that you’ll ever see, so it’s not like we could hang out there. Eventually we decided to take the airport shuttle to Third Place Cafe, which was near our Airbnb, so we could have a leisurely breakfast while we waited for check-in. The food was great, but the smell in the air when we got out of the shuttle was not…this first whiff of Rotorua’s permanent sulfur stench was a rude awakening!

The rain wouldn’t let up and we couldn’t sit at the cafe forever, so we made a run for it with our luggage to our Airbnb…let’s just say that nothing was very dry afterwards. Thank goodness for hard-side suitcases! Once we got inside, the thought of going back outside was so unappealing that we sat around for a couple of hours hoping it would die down. Eventually it went from ‘pouring’ to ‘drizzling’ and we made a run for the nearby Wendy’s for a quick lunch before going grocery shopping for our stay. Given my vast experience thoroughly evaluating McDonald’s locations across the globe, it was only fair to also evaluate Wendy’s. I was shocked with my findings–American Wendy’s is most definitely superior to New Zealand Wendy’s. Never did I think I’d see the day where US fast food would taste better given our fame for using ‘meat’ and other quotation-marked food items. I feel so proud.

Grocery shopping was totally mundane until the very end when we were paying and I wasn’t allowed to purchase the wine we selected because I didn’t ‘look old enough’ and I only had my US state license on me (as opposed to my passport) 😒 I would like to point out that NZ’s legal drinking age is 18 years old…and as much as I’d like to deny it, I have not looked 18 in a VERY long time. When Ben tried to show his passport they still denied us because he could just be enabling my underage drinking habit–I kid you not. This is the first time in 6 weeks that I’ve gotten legitimately angry–don’t get between a sick 30 year old woman and her wine. On the way home there was a liquor store and I sent Ben in on his own to buy our booze. I win, NZ!

Given the crap weather and my worsening cold symptoms, we just had a quiet night in killing our brain cells with reality TV and stupid phone games. Precisely what #permanentvacations are for, right?

After such a stressful wine shopping experience, clearly we deserved a day at the spa. Because Rotorua and the surrounding area is a geothermal heaven, one of their specialties is geothermal spas. Despite being a bit pricey, we chose the Polynesia Spa given that it was within the city and thus easier to get to. We spent like 3 hours there and it was fantastic–so relaxing. We got to use 5 different pools (4 alkaline & 1 acidic) plus there was a cold plunge pool–Ben got a real kick out of that and I gave it a wide berth ’til the end when I gave the cold shower a try…never again, thanks. They also have geothermally-heated stone recliners that provided a perfect end to the day. Plus, all of these pools are right next to Lake Rotorua for great views while you relax. For a deluxe spa experience, go here! 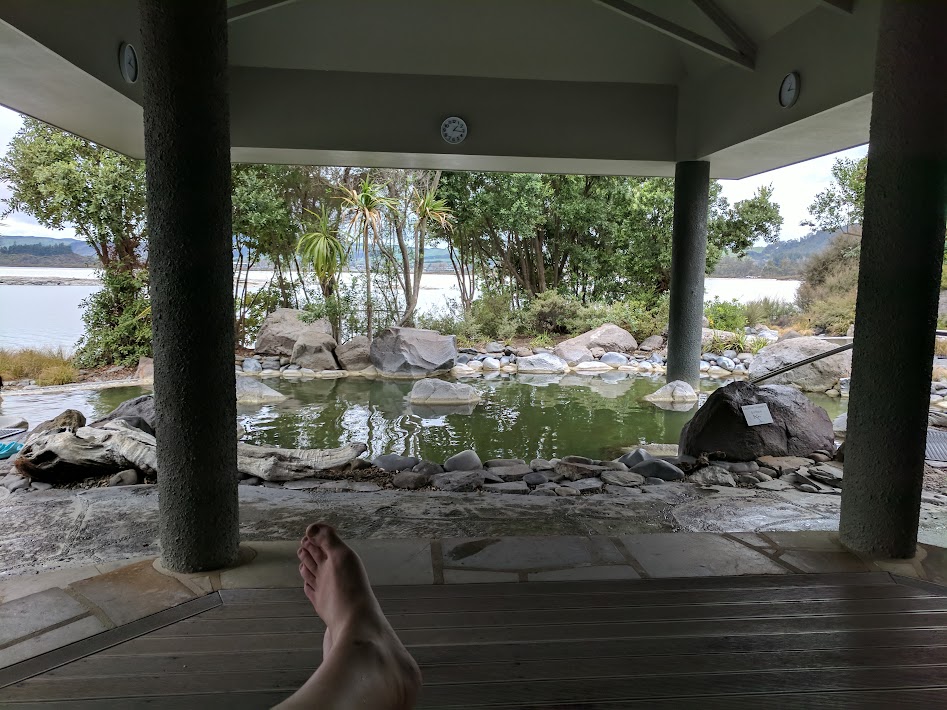 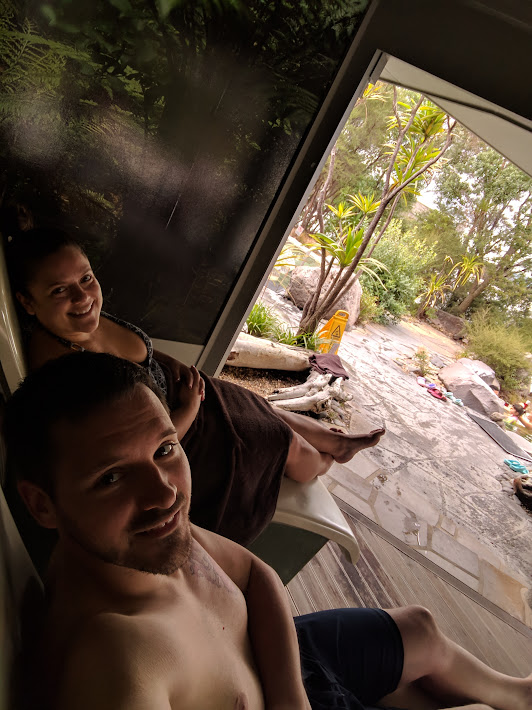 Later that afternoon we made our way to The Redwoods, a special section of the Whakarewarewa Forest near Rotorua where they planted California Redwoods. I’ve never seen the Californian Redwoods in actual California so I have nothing to compare it to, but these trees were damn impressive. I look forward to seeing them in their native land! 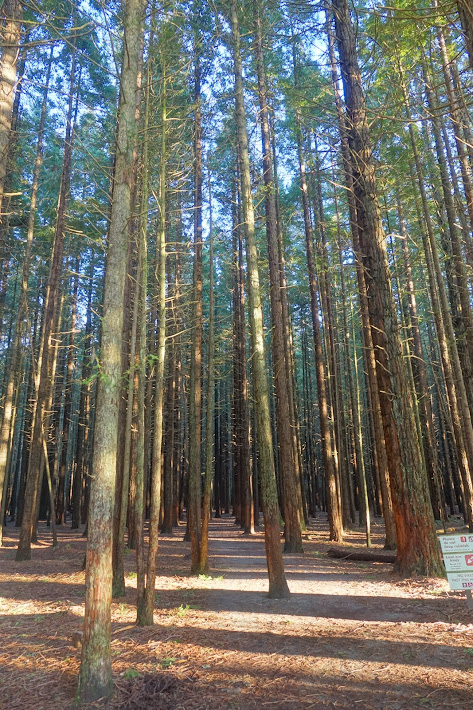 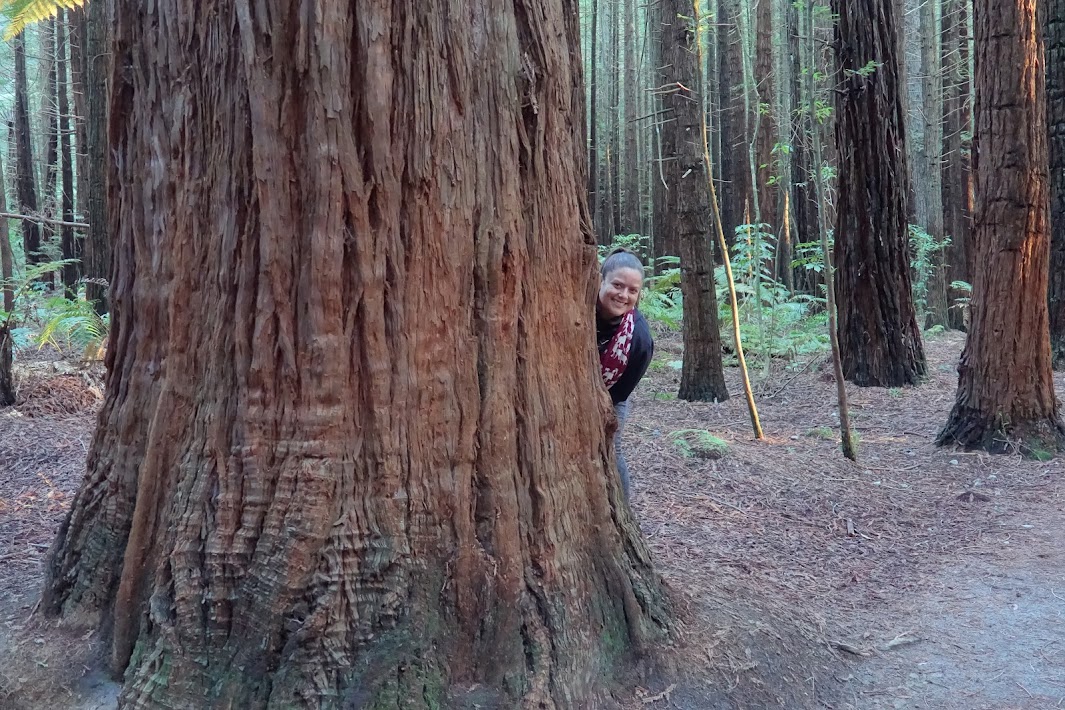 After a walk through the forest, we went on the proper Redwoods Treewalk–a walk along 23 suspension bridges between 22 huge Redwoods–and with night light installations to boot. I’ll admit it was a bit scary at times since the actual bridges were squeaky and wiggly and looking down was not so fun when it was still light out, but mostly it was really beautiful. It’s hard to get good pictures of the forest in the dark so you’ll just have to see for yourself! 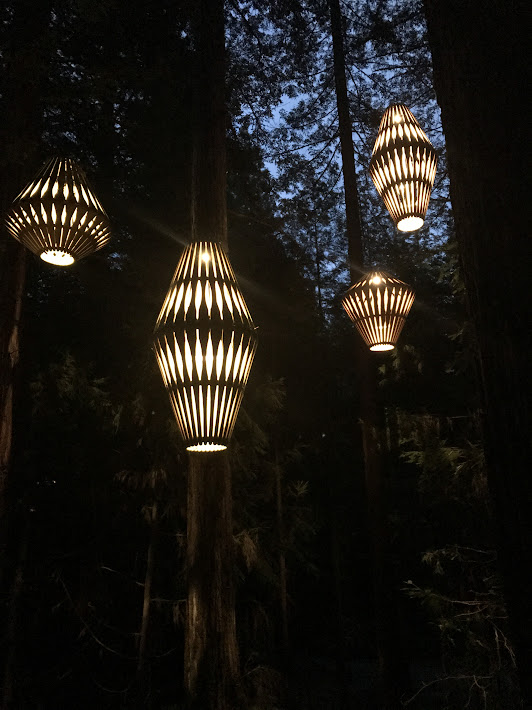 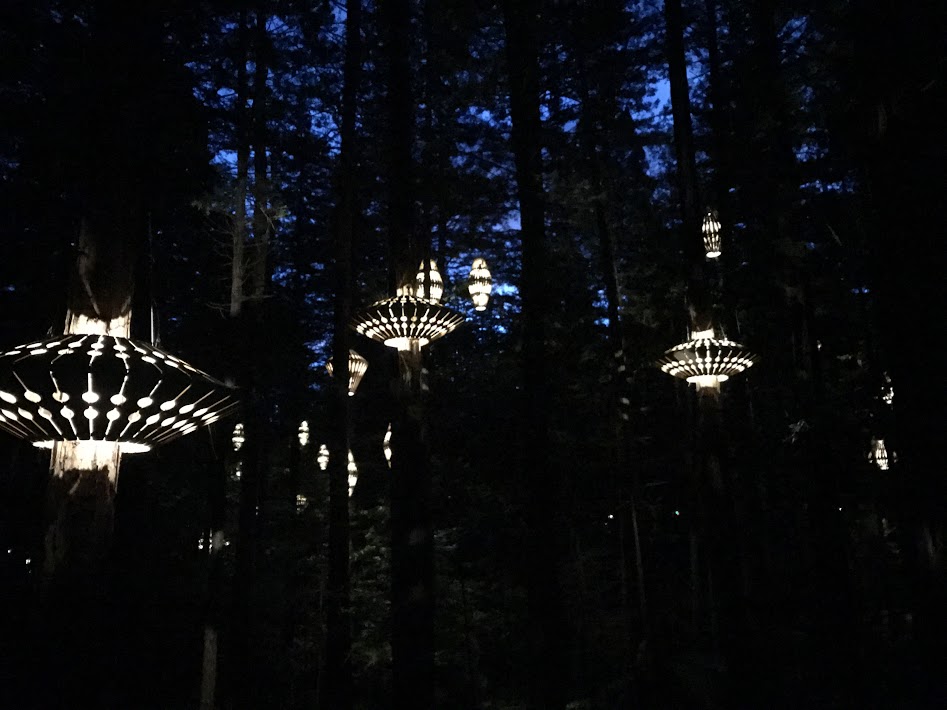 After a relaxing morning and early afternoon at our Airbnb, we made our way to Te Puia, a geothermal preserve and Maori cultural center. We decided to get the tickets that would give us both the daytime and evening experience so we could see the geysers and kiwis during the day but also get to see the cultural performance and enjoy the Maori dinner at night. It was pricey but it was totally worth it.

We hadn’t had enough of Rotorua’s geothermal magic, so we got a rental car and drove down to Wai-O-Tapu for some more geyser action. I thought it was a cool scientific phenomenon that the Lady Knox geyser erupts every day around the same time (~10am), but once we got there to watch, it became clear why–while she is an active geyser, she only naturally erupts every 12-72 hours and since people can’t stand around waiting for that long, they throw in a little surfactant to make her perform on schedule…tricky tricky! 😏 She was cool nonetheless:

Afterwards we took a walk through the thermal grounds to see all of the different craters and pools, and it was sort of amazing. There are too many pictures to show but here are some of my favorites:

Once we were done here, we drove down to Taupo towards Huka Falls, but first–a visit to McDonald’s! The Mickey D’s there has an airplane you can eat in, and who can say no to that? [For anyone who cares, NZ McDonald’s is better than American McDonald’s but not as good as Australian McDonald’s (or Luxembourgish McDonald’s).] 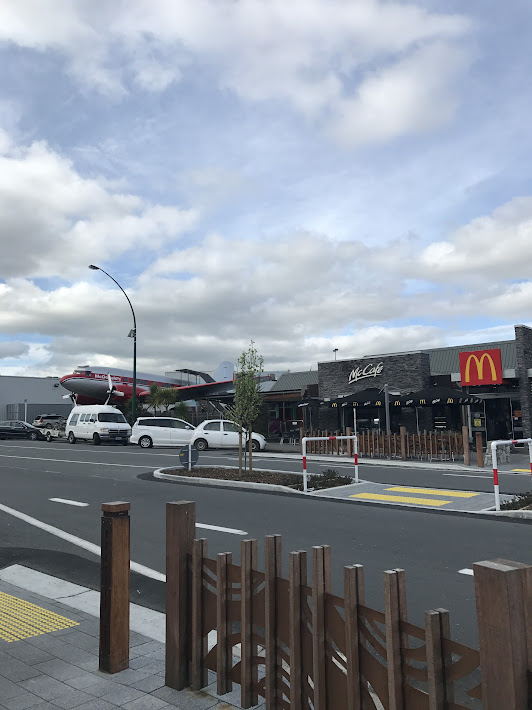 Now onto Huka Falls. After seeing so many waterfalls in Hawaii and Milford Sound, I was sort of waterfall’d out and figured it wouldn’t be particularly special but holy shizzle was I wrong. Still pictures do not do this river and waterfall justice–the force of the water was mind blowing and gives you a healthy appreciation for Mother Nature. Here are two 5 second videos to show you what I mean:

After we finished ogling the river/falls, we went for our last stop of the day–yet another spa! This time we stopped at the Waikite Valley Thermal Pools, which is on the way back to Rotorua from Taupo. This place is much cheaper and thus much less fancy, but it was great nonetheless. For $20 a piece we got access to all of the common area pools (for unlimited time) PLUS 40 mins in a private pool. Totally worth it!

And so ended our time in the stinkiest place on Earth. I’d like to say that you eventually get used to the smell but that would be a lie 😂 Next time: our Hobbiton & Auckland adventures!

One thought on “Rotorua: the stinkiest place ever”