Continuing our catch up…

Day 58: From Paradise to Paradise Jr.

Sadly, the day had come to leave Bora Bora. I ate my feelings over breakfast and off we went. Fortunately, we were on our way to another one of French Polynesia’s beautiful islands – Maupiti. Most people have never heard of this island given its much more famous counterparts, but this place is just as gorgeous. It took two flights (each approximately 10 minutes long 😂) to get there, but it’s totally worth it. This island is much smaller (Bora Bora has a permanent population of ~10,000 people, Maupiti has a population of ~1,200), and thus much more quaint–no big hotel chains here, only B&Bs. We picked Pension Tautiare and I think got a great deal in the end. Once we arrived at the Maupiti airport (which is literally a runway, a small booth for checking luggage, and a few benches under some palm trees), we took our boat shuttle to the main island where our B&B hosts would be picking us up.

Can I just say that the boat shuttle was one of the funniest experiences of my life? It’s a tiny boat that fits maybe 10 passengers plus the 2-3 crew members, but on top of that, it serves as a cargo ship. That’s right, since Maupiti is so remote and only has flights coming in a few days a week, mail/cargo is put on passenger planes and delivered to the main island by the airport boat shuttle. So here we are, on a tiny boat chock-full of passengers and luggage, and then the crew starts dragging in box after box of stuff, from bicycles to adult diapers. The fact that the boat didn’t sink is a miracle. That said, even if it did, the water looked so shallow I probably would have survived.

Upon pick-up, it became very clear to me that I would have no idea what was happening for the next 3 days–Maupiti was wayyyy more French-y than Bora Bora, and the host spoke rapid French the whole way back to the B&B. In her defense, I don’t think she knew I didn’t really speak French since Ben was following along decently, so it wasn’t until we drove up to the B&B that Ben translated for me–a couple had showed up earlier in the day thinking they had a confirmed reservation when in fact they didn’t. She didn’t have the heart to turn them away because they were elderly-ish, so now Ben and I plus the other couple that flew in with us would need to decide who was staying in the actual guest room vs. a spare bedroom in the hosts’ home. #travelmishaps It was sort of an awkward thing at first, one of those situations where you’re waiting to see who’s going to talk first, but ultimately the other couple suggested a middle ground solution–they would stay in the spare bedroom for the first two nights and then we would swap (we were only staying 3 nights total, they were staying 4). It’s not like we had a good alternative anyway–there aren’t many other accommodations on the island and most were fully booked–so it was time to go with the flow. C’est la vie as the Frenchies say (though our hosts have a 5 year old son who kept saying “C’est pas juste!” and that is now my favorite French phrase). That night, the host cooked up a delicious meal. Of course the protein of choice on Maupiti is fish, because you know, it’s an island, but they were so nice and made me a small portion of meat. The Frenchies looooved making fun of me for that one 😂

Day 59: The biggest manta rays ever

After an early breakfast, it was time for a boat excursion organized by the B&B. First up was snorkeling. I imagine the first spot we went to must be known for the manta rays, because I can’t fathom it being a coincidence that we jumped in the water and were right above two massive manta rays–bigger than I’ve ever seen. I’m not sure the pictures do them justice. 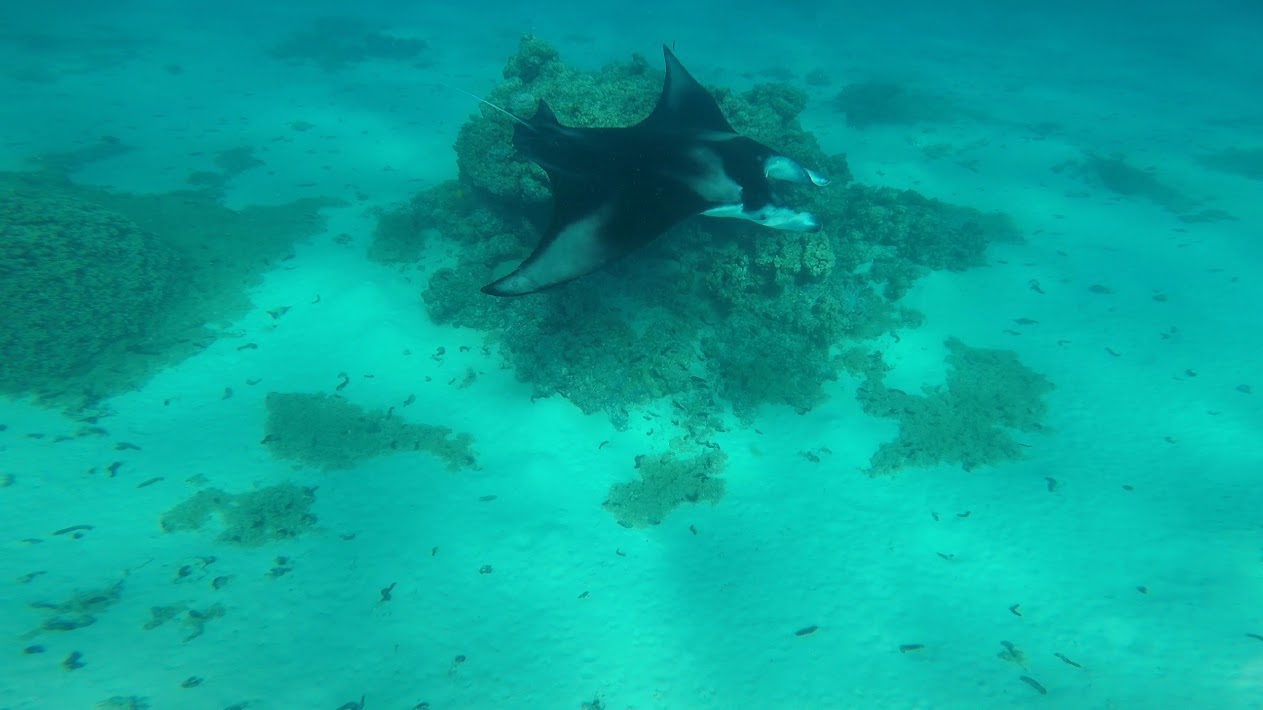 We snorkeled at another spot after that but really, what beats giant mantas? We ended up getting a slight tour of the island and its atolls as we made our way around to our lunch spot, and the colors of the ocean were just as gorgeous as in Bora Bora. How are these places real? 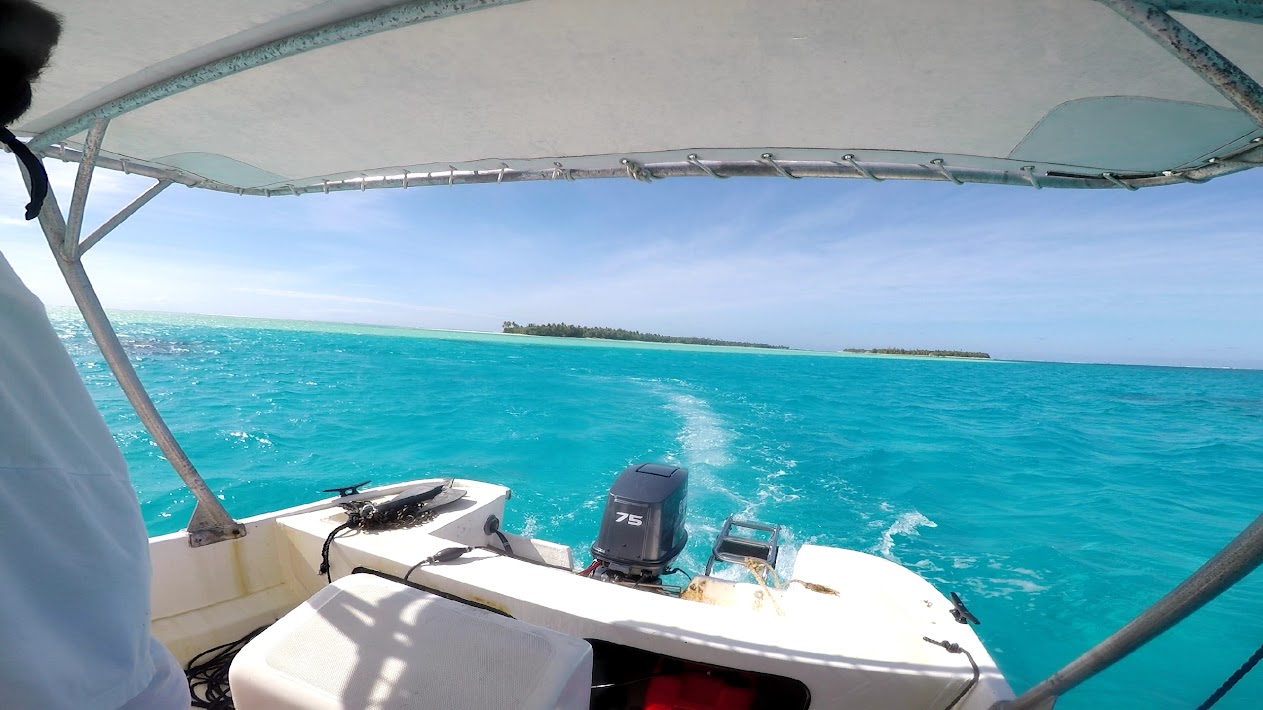 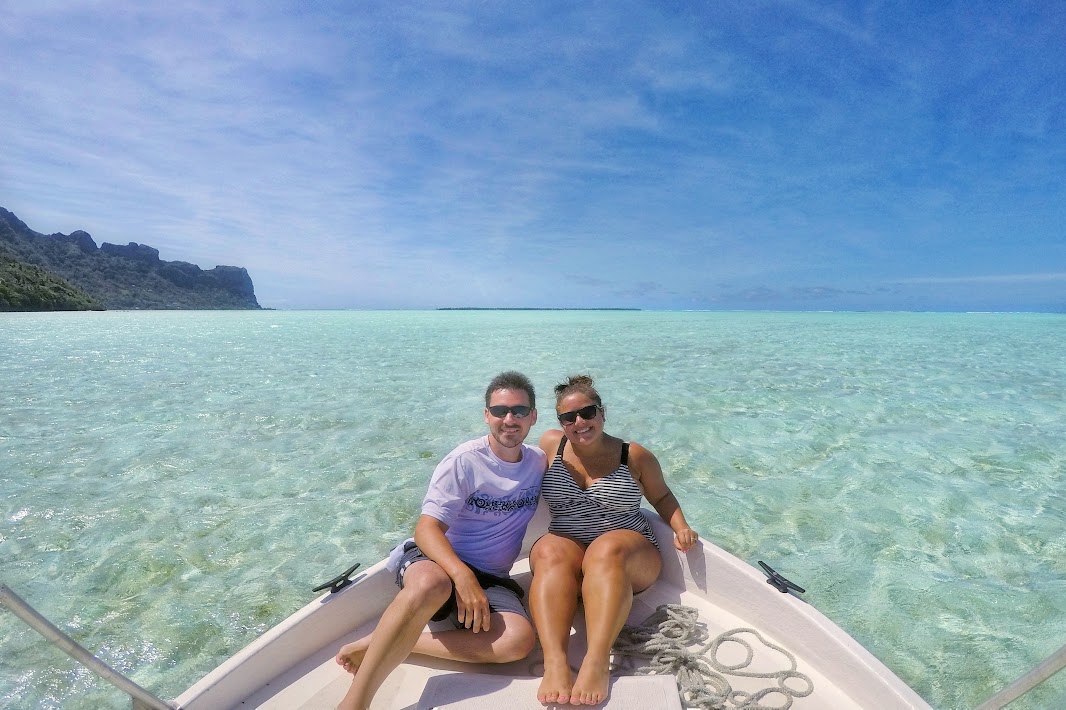 Eventually we made our way to an uninhabited island/atoll of Maupiti for a little beach BBQ action. Once again they were very gracious and made me a small non-seafood portion that I thoroughly enjoyed, and I’ll even admit that the fish looked good. The host made this coconut-type bread in some kind of leaf on the grill and OMG 😍 I would eat that bread every day, with everything.

This beach also happens to get the occasional ray visit, and it helps when you throw some fresh tuna in the water…within a few minutes, we had two beautiful (much smaller) rays surrounding us looking for more lunch. They had no problem getting right up close to the GoPro: 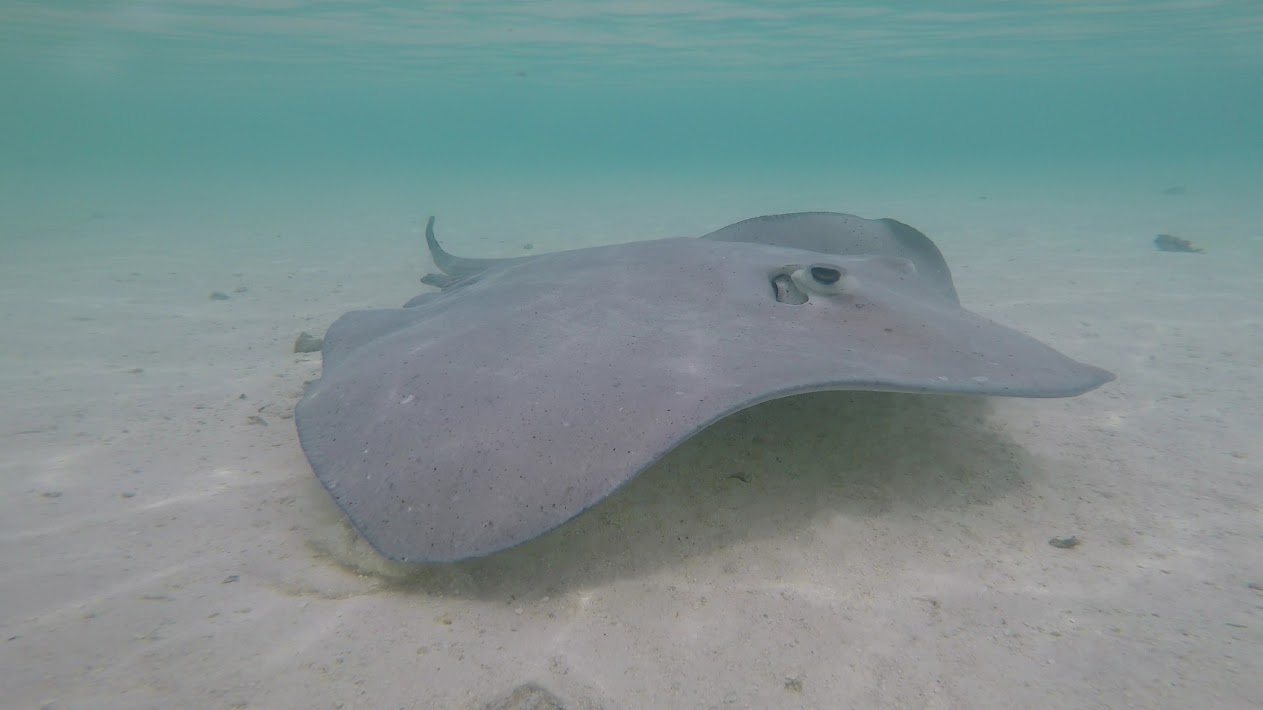 After a beach nap and some more swimming, eventually we headed back for the B&B for a relaxing night.

The morning looked a little gloomy, so I decided to stay in for a couple of hours and watch HP (#always) while Ben made his trek up the mountain. I’m glad I didn’t attempt to join him because I may very well have had a heart attack attempting it given the way he described it, but the view he got is to die for:

The weather cleared up later in the morning so I decided to make the trek to the beach. Maupiti has ONE beach (Terei’a Beach) and it was ~2 kms from our B&B, and you have two ways to get there: up and around a part of the mountain or along the shore. I wasn’t sure what the shore walk would entail as the hosts seemed to describe it as unideal, so I went for route 1. Lord knows the mountain climb almost killed me, but I got some pretty amazing views of my own:

Eventually I found the beach and forgot the torture of getting there–the sand was pristine, the water totally clear and only knee deep all the way from the coastline to the next island/atoll (no seriously, you can walk across the ocean from one island to the other). I say it again: how is this real life? Ben found me a little while later (we had no cell service in French Polynesia at all, so I had left a note in our B&B room hoping he would find me the old fashioned way…walking ’til you find the person you’re looking for), and we had a leisurely lunch and cheap beers from a little beach hut. Eventually we made our way back to the B&B, this time via the shoreline route, and had yet another relaxed night in. I was truly made for #islandlife.

We had an early afternoon flight to Tahiti, so we had a leisurely morning at the B&B. We did manage to grab lunch at the one and only true restaurant on Maupiti before leaving–success!

Our hosts dropped us off at the dock for our boat shuttle back to the airport–sadly this boat ride was not nearly as funny as the one on the way in since there wasn’t any cargo…oh well.