We had yet another Air Asia flight that morning, this time to head to Chiang Mai, a city in northern Thailand. The flight passed without issue and we were at our new hotel–Rendezvous Classic House–by mid afternoon. We found a random spot for lunch that afternoon (there weren’t many places open near us, oddly enough) and then took some time to settle into our room before the real fun: Chiang Mai’s Sunday Night Market.

The market is held outside, along various streets of Chiang Mai’s Old City. Shops were open by 5pm, the market was busy soon thereafter, and it was totally packed within an hour. It’s impossible to say how many vendors were there, but I’d guesstimate something in the few hundreds range. And, as is to be expected, they sell everything you could imagine, from massive wall art and other decorative items, to clothing and shoes, to toys and knick knacks, not to mention what felt like a million food and drink stands. I’m pretty sure 75% of the stuff being sold was somehow elephant themed and so I basically had an existential crisis about how to contain myself because even if I could find the money (most of the stuff was SO CHEAP anyway), there’s not enough suitcases in the world to send it all back home in. It was my biggest #firstworldproblem yet 😫😭

The weather was ‘eh’ so we decided to spend this day pampering ourselves to the nth degree. First up, a delicious Italian lunch at Sipolle. Yum yum yum.

Then, around 2pm, we were picked up by the spa shuttle (Makkha Health & Spa) to start our pampering. Ben went with an herbal milk bath, an aromatherapy hot oil massage, and head reflexology; I went with a foot massage, Thai full body massage, body scrub, and facial. Did I need all of this? HA! Of course not. But really, who says no to 4 hours of services for $100USD? Important notes for future spa goers: 1) a Thai massage is one in which the masseuse beats you up and takes you apart and then puts you back together again and 2) a body scrub is of basically your entire body, no modesty allowed here! Wish I could afford (the money AND time) to do this every week for the rest of my life 😂

Like most cities in Thailand, Chiang Mai has plenty of temples. We decided to take the morning to walk around the city a bit and take a look at them. 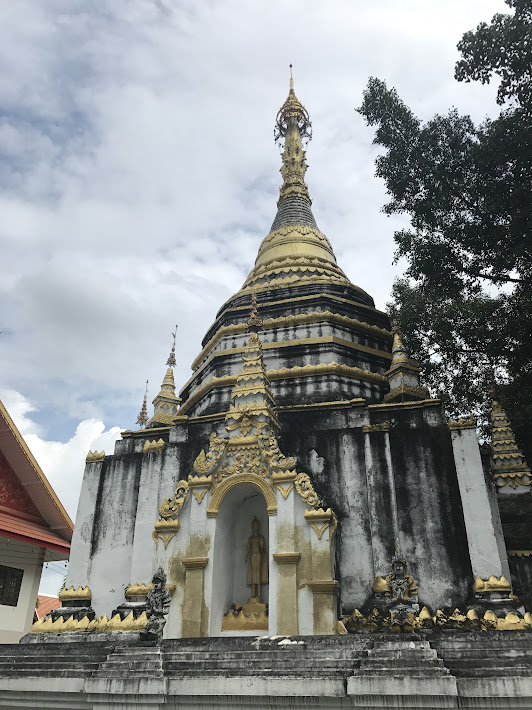 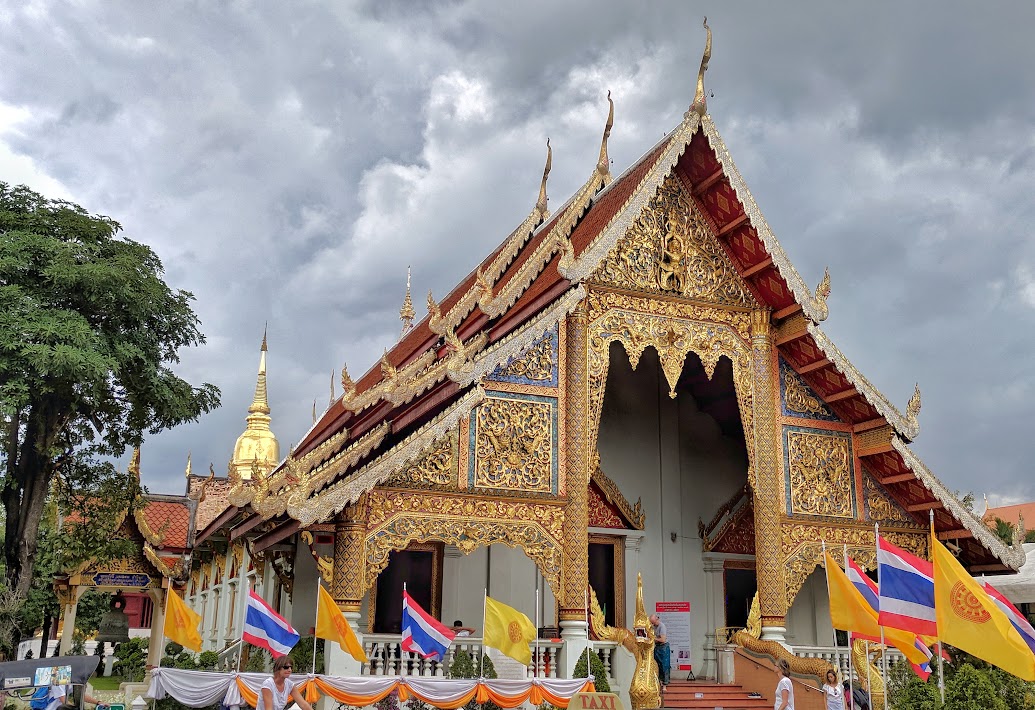 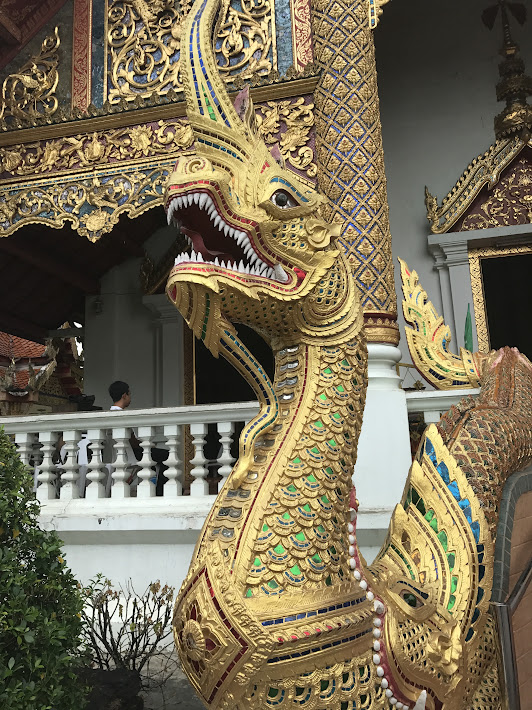 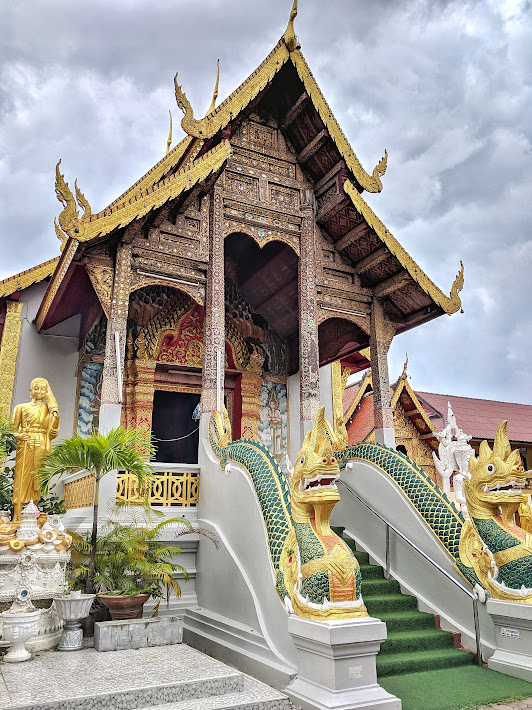 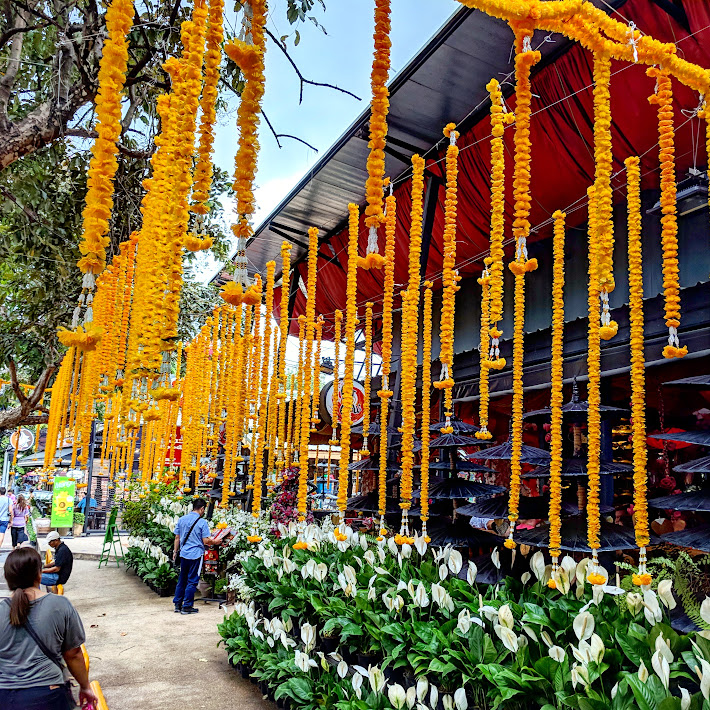 We had a leisurely lunch that afternoon at Sheryle’s Restaurant & Bar, and it was there that we learned the reasoning behind Thailand’s odd alcohol sale rules (you can only purchase alcohol between the hours of 11am and 2pm and 5pm and 11pm/midnight at both stores AND bars/restauarants)…apparently blocking alcohol sales between those hours (2pm-5pm) is meant to prevent kids from getting access? The whole thing was very strange, and hilariously enough, it looked like only 7/11 enforced it because restaurants were willing to help a girl out with an afternoon beer 😂

Our afternoon was lazy and useless, as vacations should be, and we decided to go back to Sipolle for dinner because I can’t say no to pasta. This time we went all out and got an appetizer to share, wine, AND dessert–fancy living. 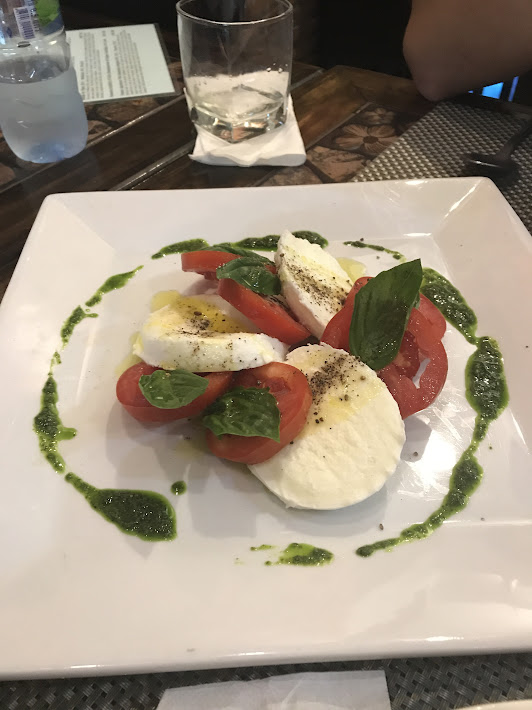 As we were in the mountainous part of Thailand, we felt like we should probably go see a mountain. We booked a group tour of Doi Inthanon National Park, which would include a visit to Thailand’s highest point, the King & Queen’s pagodas, 2 waterfalls, a Hmong market, and a small local village. The day was foggy as hell so our views were relatively limited, but it was nice to see all of the lush greenery. I’ve never been to forests in the Northwest US but I feel like it would look a bit like northern Thailand.

First up, the highest spot in Thailand…just 2,500 meters above sea level 😂 It was kind of hilarious to hear the guide call it a ‘mountain’ when just a couple of weeks before, while in Nepal, a similarly high peak was called a ‘hill’. I guess nothing ever compares to Everest! 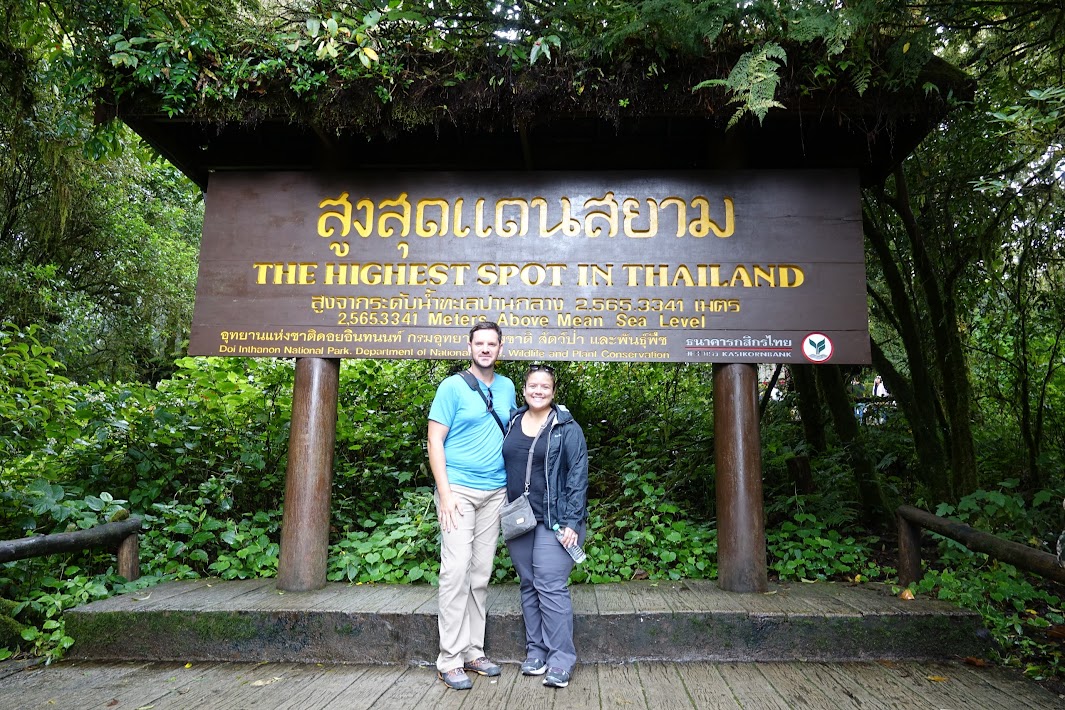 Afterwards, we had a chance to walk along a nature trail to enjoy the scenery a bit more: 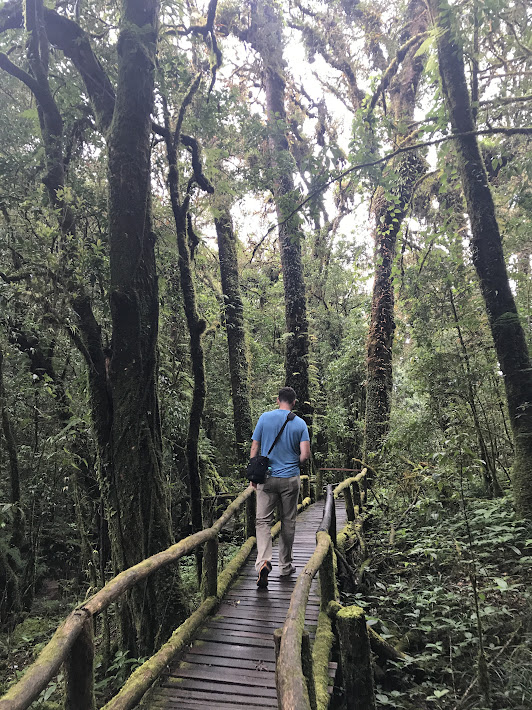 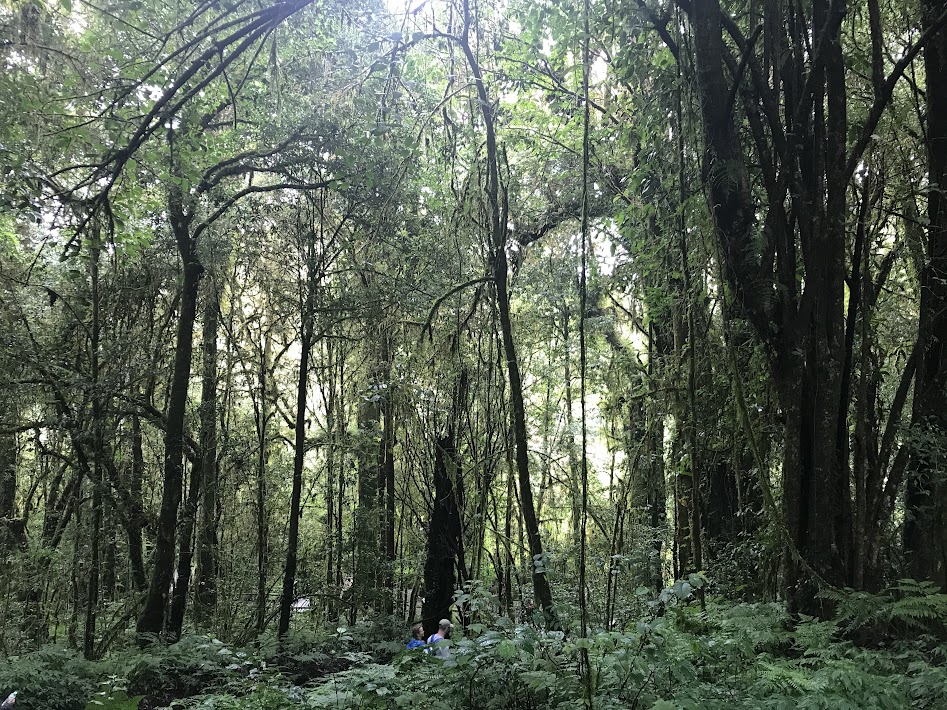 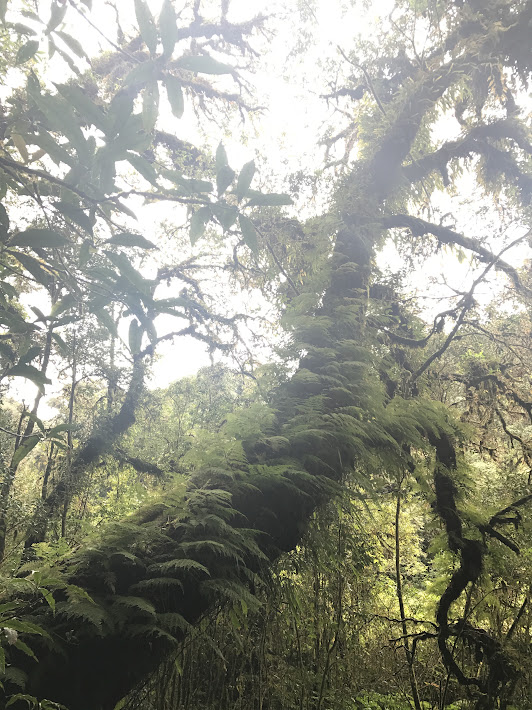 Next up were the King and Queen’s pagodas. The pagodas were cool enough, but my favorite part was the massive garden surrounding the Queen’s pagoda. 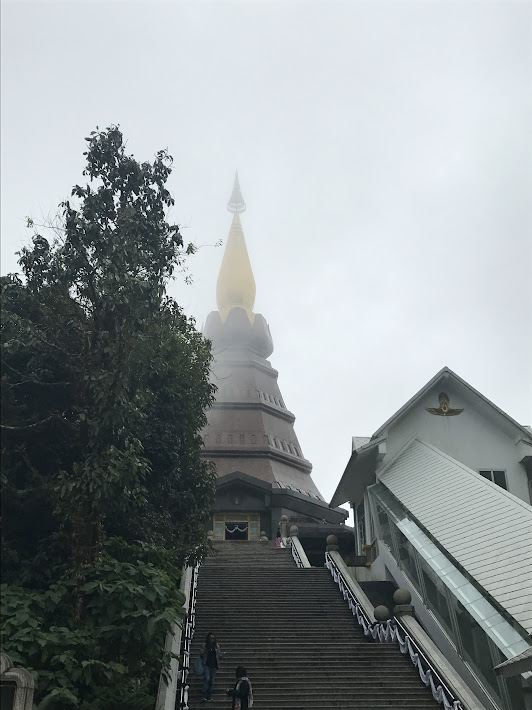 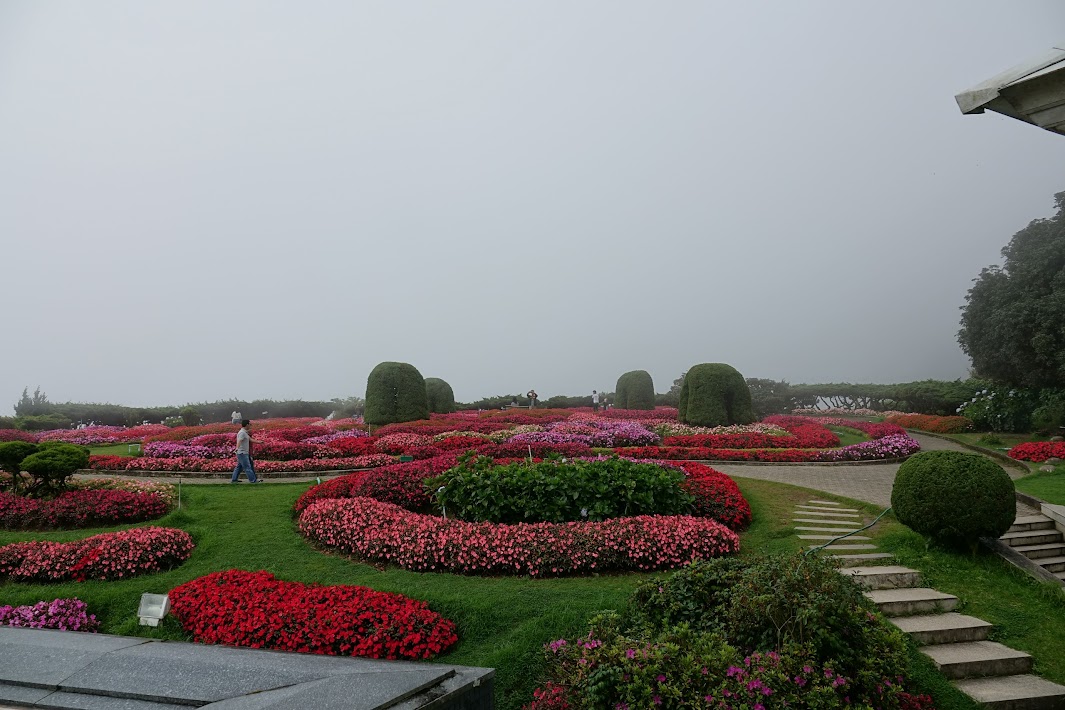 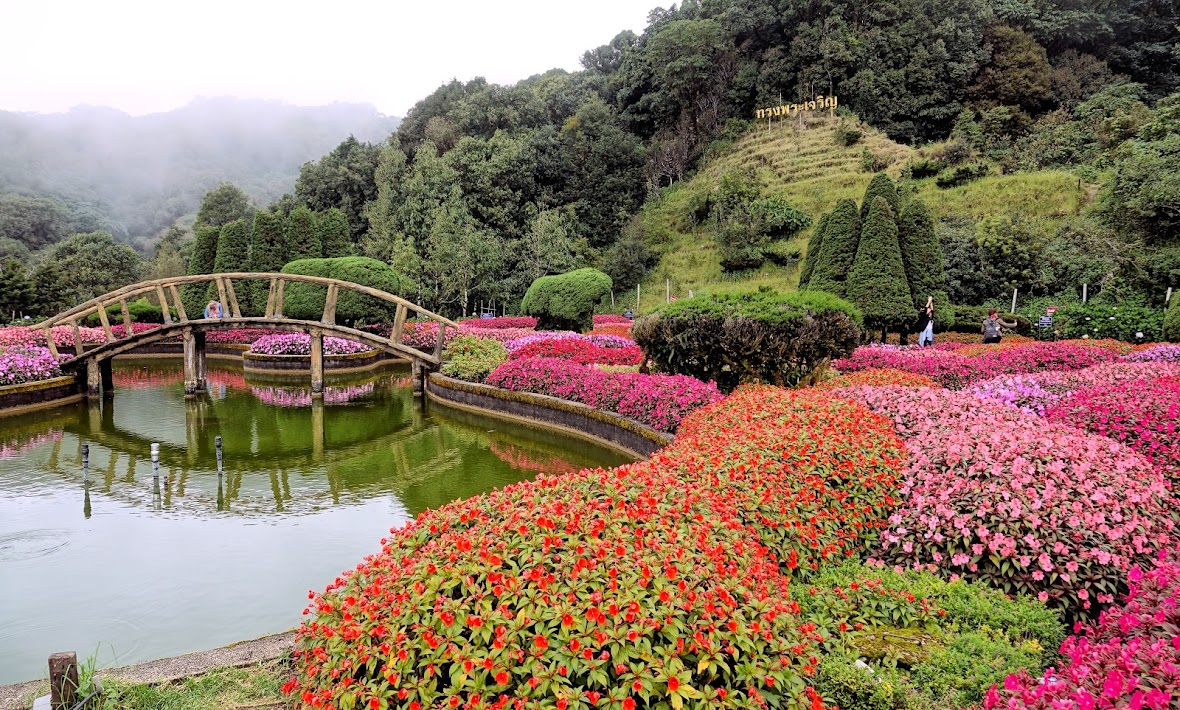 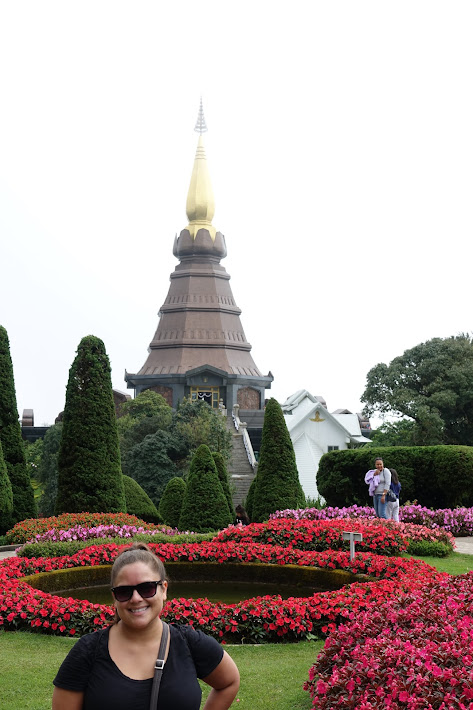 We briefly visited a Hmong market on the way back down the mountain, lots of stands selling fresh fruits and veggies or dried fruits and nuts, etc. As we continued our way down, we stopped at our first waterfall, Sirithan Waterfall, which has a 40 meter drop.

Next stop on the way down was a small local village where their specialties are coffee & weaving. Of course I found baby animals to obsess over. 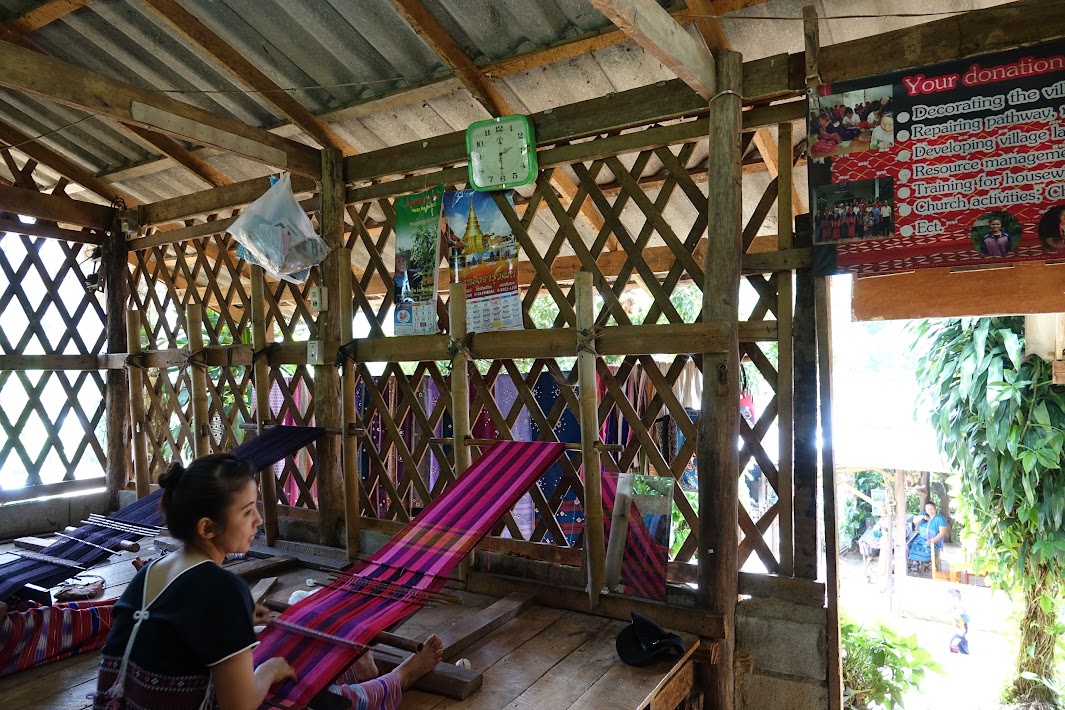 Last stop of the day was Wachirathan Waterfall. It’s only an additional 10 meter drop compared to the last one (so 50m total) but it was much grander and much splashier–mist everywhere made you feel like you were taking a little rain shower. Really lovely waterfall. 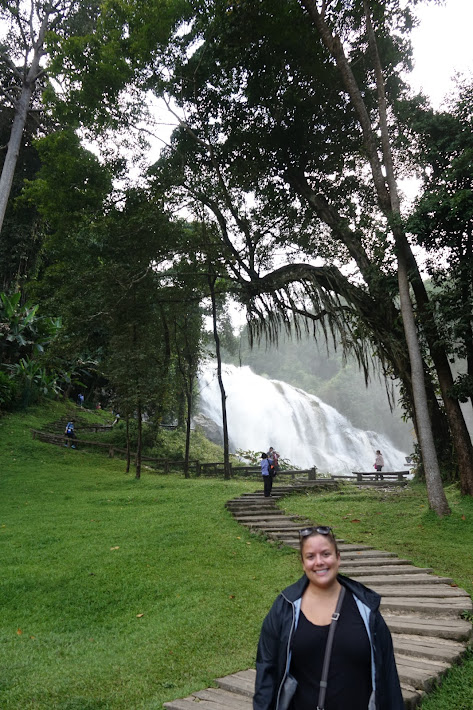 All in all, a great tour. So why the odd title for the day? Well, everywhere we went, god help you if you needed a potty break because the toilet situation was BLEAK. At the peak of the mountain, at the pagodas, at the lunch stop…all Asian squat toilets. Never seen one? Here’s what I’m talking about: 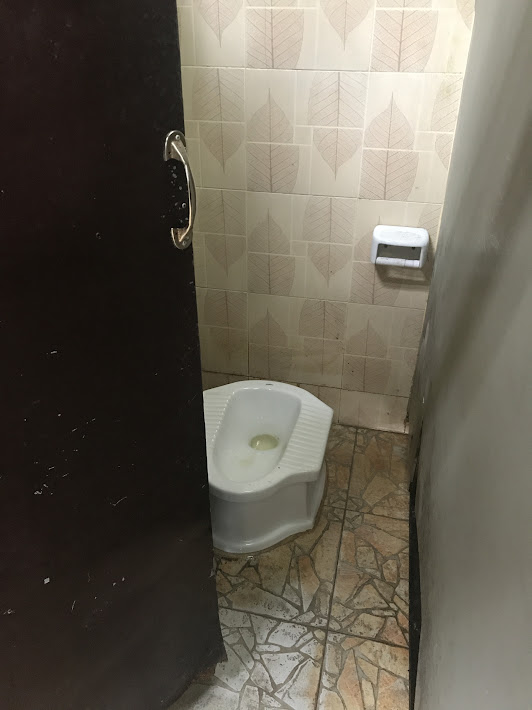 Now don’t get me wrong, I’m not trying to poo poo (pun (not) intended) on another culture, but these toilets are not easy to use and certainly not the most sanitary. There are plenty of online tutorials on how you’re supposed to use them, but no tutorial can prepare you for encountering one in real life and trying to figure out how on earth you’re supposed to use it and 1) not get pee all over yourself and everywhere else and 2) not lose your balance and fall in it. Not to mention that there’s no toilet paper but instead buckets of water with a little cup for washing yourself but like…how do I do this and not get water EVERYWHERE? I’m just not capable of doing this without some practice, and it’s not like I can find a clean one to practice with. Anyway. This was the day that my bladder learned to suck it up and hold it in.

Once we were dropped back off at our hotel, we decided to venture outside of the Old City walls to an international supermarket (Rimping Supermarket) in search of one of my deepest American cravings since we left…Doritos. Alas, we didn’t find any, but we did find Cheetos and at this point, fake cheese is fake cheese. We had proper Thai food for dinner at Bamboo Cafe, don’t worry. 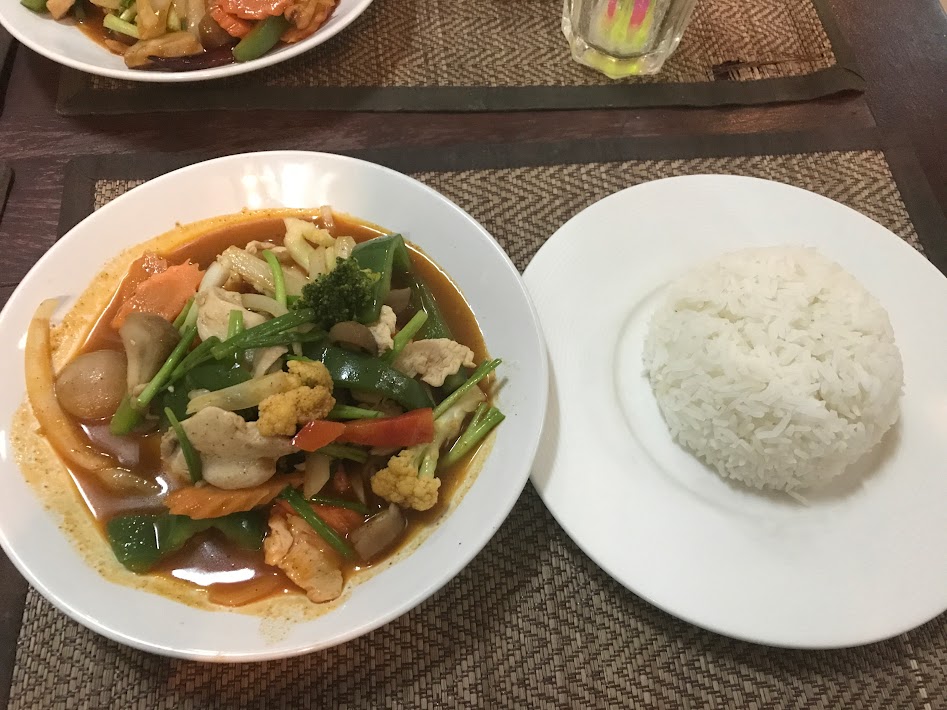 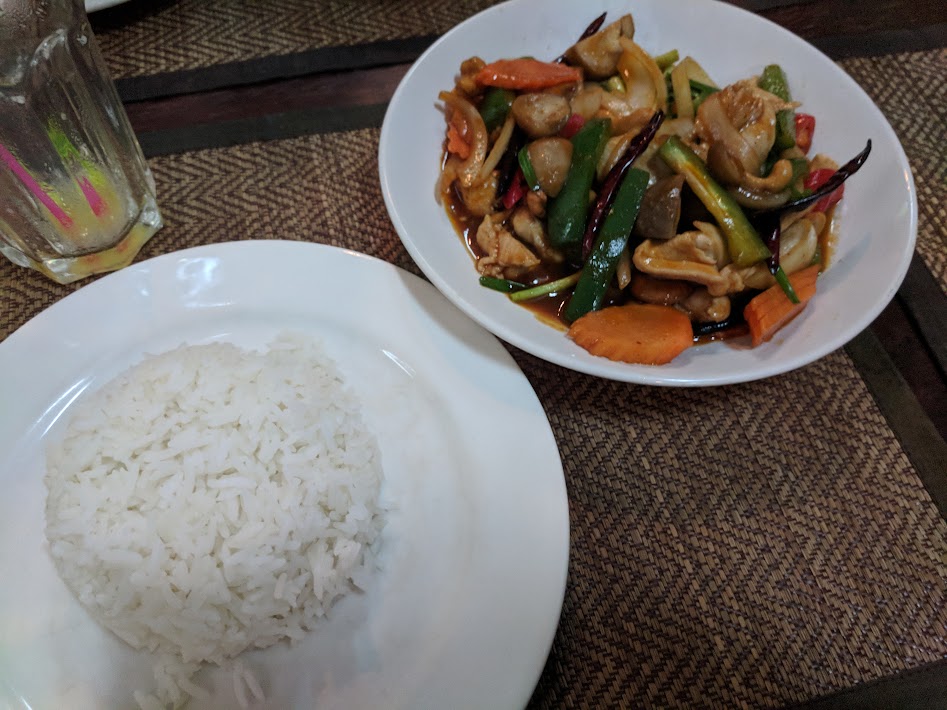 Day 98: The day of nothing productive

I don’t even have any pictures from this day, which means we literally did nothing. I suppose we ate (probably Cheetos)…but that’s about it.

[Update: I now remember why we did nothing. There was a massive ceremony in Bangkok for the former king’s cremation on this day and this meant that most of Thailand was shut down to watch the events unfold. So yeah, perfect excuse to sit around being useless.]

We started our day with a trip to Warorot Market, a last ditch effort in my long search for elephant pants. I realize now that I don’t think I’ve told you about this search, mostly because it’s just too depressing. You know those classic Asian elephant pants? If not, here’s what I’m talking about:

Well, I’ve been searching for a pair of those ever since I arrived in Bangkok with no such luck. With a little shop every 20 feet on basically every street selling these pants for $3USD, you’d think I would have amassed a collection of epic proportions, with a pair in every color, but no…no elephant pants for Sally. Why? Because Asians are tiny humans and they apparently don’t make clothes in sizes for large Dominican asses. I don’t say this as a self-deprecating remark, this is simply the truth and a fact that is easy enough to deal with in the US given the wide array of clothing sizes available at most stores. Thailand, however, will test your “I don’t wear a size 6 and I’m ok with that” emotional resolve by trying to sell one-size-fits-all elephant pants that are most definitely not one-size-fits-all. And then to add insult to injury, when you ask the lady if they have bigger sizes, she looks you up and down, eyes wide, and says “No no no, not for you, too big”–you really aren’t sure if you should 😂 or 😭 but you opt for 😂 because crying in public is generally not socially appropriate. Don’t worry, I’m not bitter or anything.

ANYWAY. Warorot Market. It’s an indoor multi-floor market that sells everything you could imagine, except apparently for elephant pants in my size. Wompwomp. 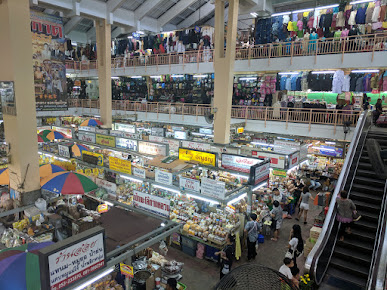 With our search over, we started our walk back to the Old City. We finally had a chance to walk across a bridge over the ‘moat’! 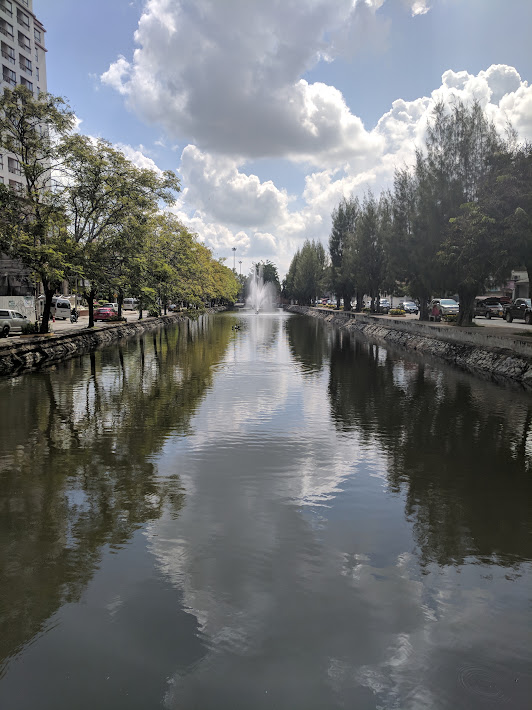 Eventually we made our way to Fat Elvis for a little lunch/dinner. We decided to try this place mostly because they’re popular in Chiang Mai for their buffalo wings, and good thing we did! Those wings were DELISH. They were so good at buffalo sauce that I ended up getting the buffalo chicken sandwich for my main meal. Also perfect. (Ben got a great burger too.) Totally authentic Thai food, right?! 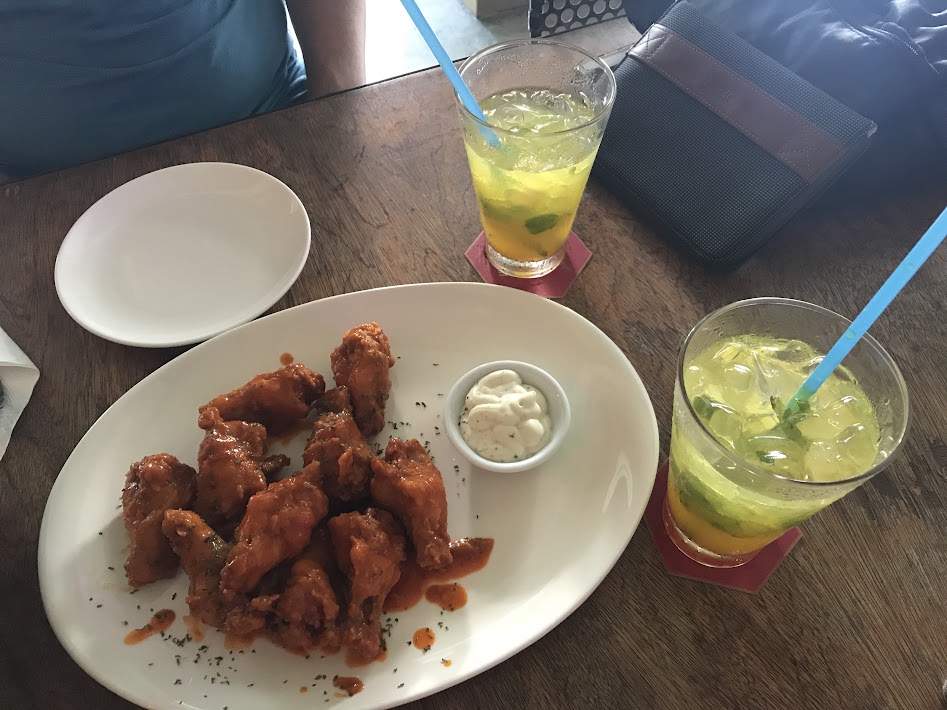 And so ends our time in Chiang Mai! We really loved it here, hoping we’ll get a chance to come back sometime soon. Next time: Siem Reap (Cambodia)!