This day was mostly lost to travel, so there’s not much to say, BUT I would like to report that the Manila airport is a tragedy, or at least the domestic terminal is. Our first stop in the Philippines was Cebu but we needed to go through Manila first and we had a longish layover. This normally isn’t a big deal because we have access to lounges with decently comfortable seats and free wifi with our Priority Pass, but Manila’s domestic terminal was apparently an exception. Instead, we had hard as rocks airport seats, which are survivable if you can find wifi and food…of course neither was available.

This terminal has ONE ‘restaurant’ and it only serves microwaved pre-packaged food. I was ready to suck it up and get the truffle spaghetti thinking it couldn’t be that bad, but by the time Ben got cash (he had to leave the terminal to find an ATM, I kid you not), some other lady stole the last spaghetti and I was instead left with the lasagna, which turned out to be the worst lasagna I have ever eaten in my life. It was so bad that even Ben wouldn’t eat it, and that means it was BAD. When my stomach couldn’t take the starvation anymore, I decided to venture towards one of the two snack stands in the terminal and was pleased to find actual American (imported) Nacho Cheese Doritos (my fave)!!! They were overpriced and I didn’t even care. I bought that $5 bag of Doritos and enjoyed my delicious (first) dinner. Fortunately, our Cebu hotel (The Henry Hotel) had a restaurant that stayed open late, so we had a real (second) dinner once we arrived.

We were supposed to wake up with touristic vigor and go explore downtown Cebu, but…that didn’t happen. There was some historical stuff we could go see but we voted against it in favor of a day spent at a nice cafe (Abaca Baking Company) catching up on real life (read: emails, ‘errands, etc). It was a slight tourist fail BUT it was necessary (and nice to just sit and take care of things for a day). That night, we ended up at a place next door for dinner: Maya Mexican. I’ve had pretty low expectations for Mexican food since we left the US given various letdowns, but this place was pretty decent. Not authentic per se, but tasty, which is something worth appreciating. The best part though? The flan. Holy moly. I wasn’t expecting much but OMG that flan was freaking DELICIOUS, and I say this as a VERY picky flan critic. I almost got a second one but held back, thinking that perhaps all flan would be this good in the Philippines…I was wrong. Lesson learned? Life is short, get the second slice of flan. 😂

Our time in Cebu was short, it was mostly a stopping point on the way to Bohol, a major Filipino destination. We took an early afternoon ferry out there and it was a pretty smooth experience, so future travelers: worry not! (We were worried it was going to be a hot mess because most of the ferry services don’t have info online or let you book in advance, but the one we picked worked out just fine–Ocean Jet.)

We had a pre-arranged driver for our time in Bohol, so pick up was a breeze and then we had a drive out to Panglao, a small island right off the coast of Bohol where we would be staying for about a week. We checked into our first hotel, Alona Golden Palm Resort, and had a pretty quiet first night–just walked over to Noah Pizza for dinner. BTW, we were too hungry to remember to take pics of our dinner, but YUM.

Our driver from the day before took us on a tour to key ‘countryside’ spots on Bohol Island, including the Chocolate Hills, Hanging Bridges, Loboc River, Exotic Animal Park & Butterfly Garden, and the adorable and endangered tarsiers. We had a great time!

Ben was feeling homesick that night so we went to C.U. Biergarten for dinner and he enjoyed some kind of sausage and potato shenanigan while I ate a hearty burger with fries. Can’t complain!

We had a very #islandlife day…just hung out a bit at Alona Beach (a bit of a disappointment really) and relaxed by the pool. Hard to complain about a mostly sunny, lazy day.

Later that night we went to Bamboo Place Restaurant for dinner, and I had one of the most delicious chicken dishes of my life. Some sort of vanilla-flavored curry? Can’t remember. But DELICIOUS. Must learn how to make this ASAP. 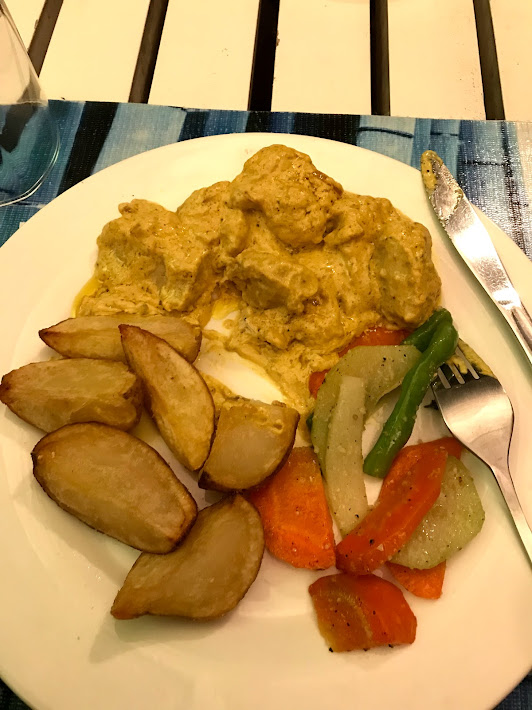 After 3 nights at a decent hotel, I was excited to move to our next place for a solid upgrade in digs: The Bellevue Resort. It was still on Panglao Island but on a better (and private) beach and generally-speaking a nicer hotel. Woo! Right? Maybe not. Just wait for it.

We took two tricycles over there (one person and one suitcase in each one because we couldn’t fit everything on a single one 😂) and had a very accommodating and smooth check-in experience. Property looked lovely, and I went straight for the beach after dropping our things upstairs. 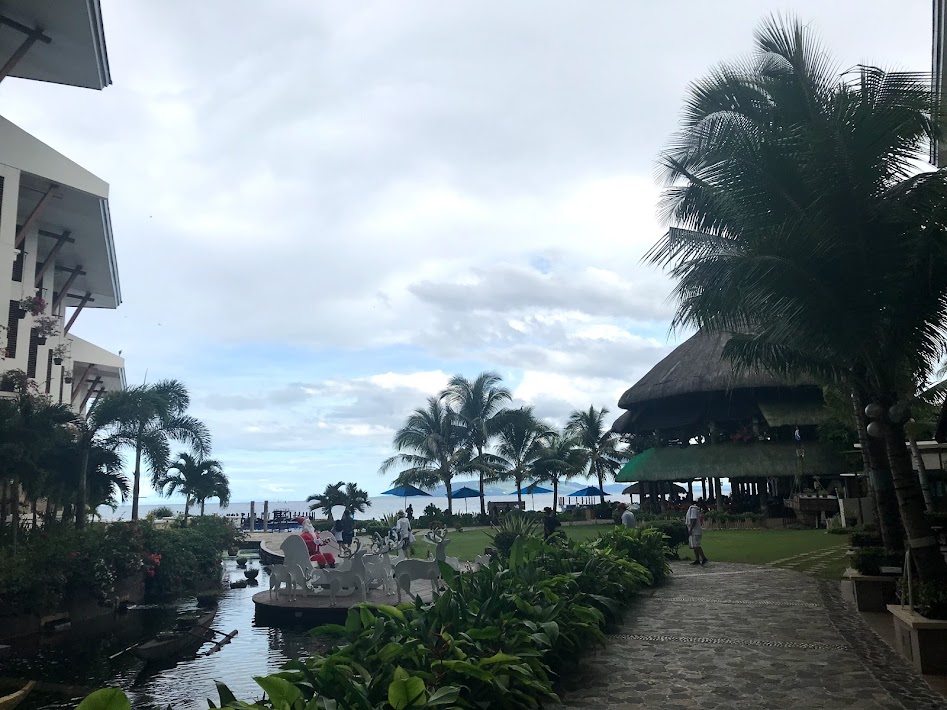 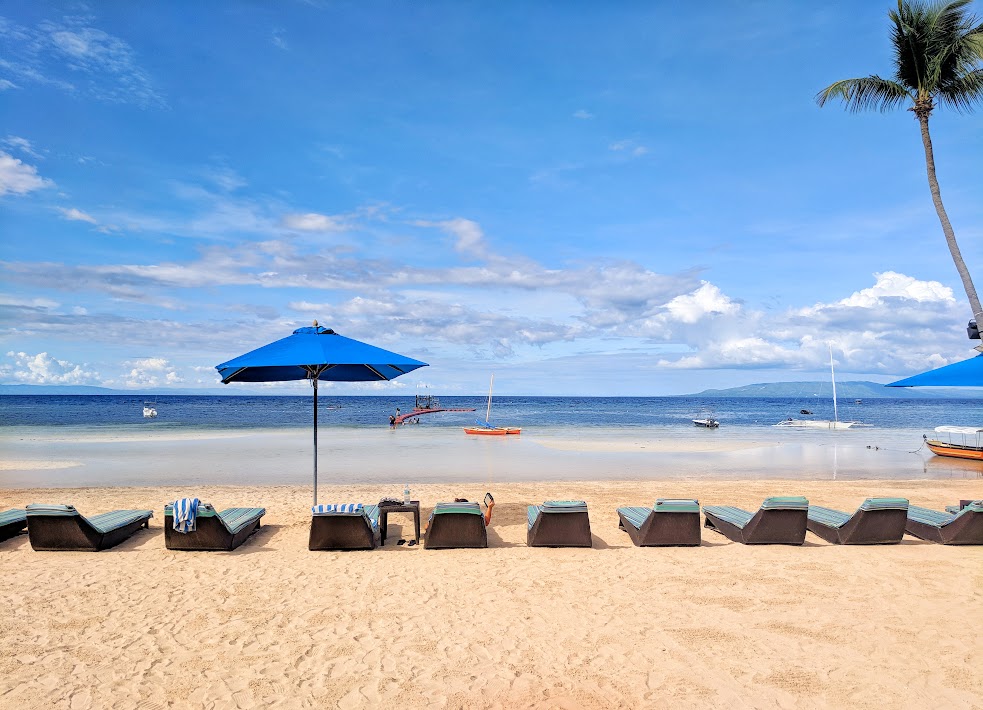 After a shower later that day, we headed down to the hotel’s restaurant dinner, had a decent meal, and even made a kitty friend (obvi)! 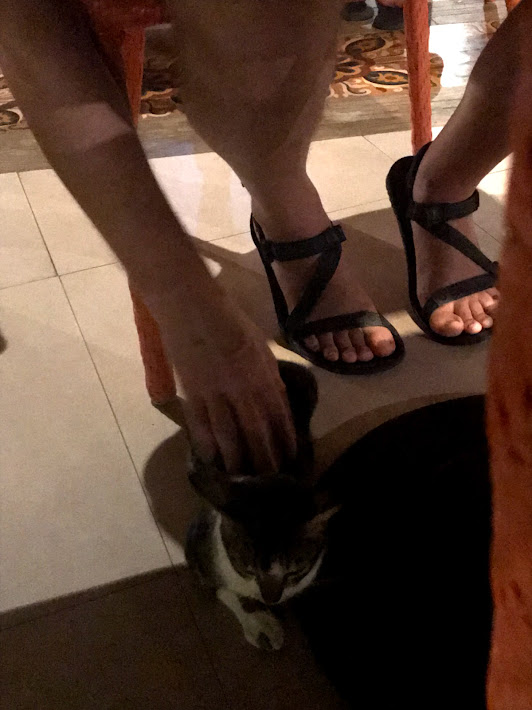 Afterwards we decided to take a quick trike ride to the nearest 7/11 for some sodas and snacks for the room. When we got back, we settled in bed for the night, watching Netflix, etc. Maybe an hour in, around 11pm, I notice a little bug and get up to rinse it down the sink–we’re in the tropics, bugs are normal. While I’m in the bathroom, I hear Ben not quite yell but certainly speak in a loud voice. I go back and THE BED IS COVERED IN BUGS. Fifteen seconds later, our problem became very clear. THEY WERE BED BUGS. EVERYWHERE. 😱 I don’t think I’ve ever come closer to an actual physical heart attack. I will spare you the dozen photos and videos I took as evidence, just know it was like a horror movie scene come to life. Never having seen bed bugs before, I can tell you all that ignorance is BLISS. Needless to say, I popped a Xanax or two to stop my palpitations and make my skin stop crawling (or at least be slightly less itchy).

Long story short, the hotel set us up in another room a few floors up and we spent an hour combing through that entire room for bugs. When we were ‘satisfied’ with our findings, we had to try to get some sleep or otherwise go insane all night. It wasn’t my most restful sleep, I’ll tell you that. 😫

First stop: breakfast for fighting energy. Next stop: Reception for a little chat with the hotel manager. She was a very nice lady and she did apologize for the incident the night before, though in my opinion she was not horrified or apologetic enough. I suppose not everyone is horrified by bed bugs? Though I don’t see how. Ugh. Anyway. She offered a free massage as compensation and ended up offering up free laundry for us as well. With no actual income, we couldn’t afford to lose the money on the hotel for a new place so we needed to stay anyway…might as well take what we can get for free.

I went ahead and went for that free massage right away to see if I could remove the massive tension I was holding in my shoulders. Of course I get there and realize that the bed and sheets and towels are all cloth and thus could have bed bugs, so I spent the first 30 minutes of the massage trying not to hyperventilate. Super relaxing massage, right?

Nothing cures my woes like a little sunshine, so I spent my day in a pool chair willing in some zen: 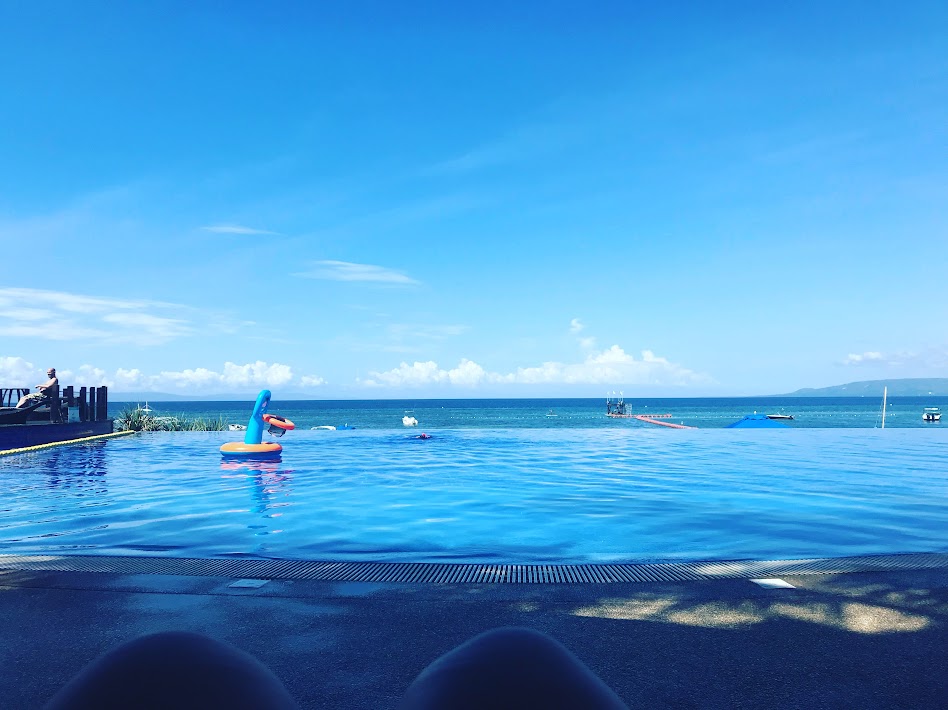 The evening views from our new room weren’t too bad either: 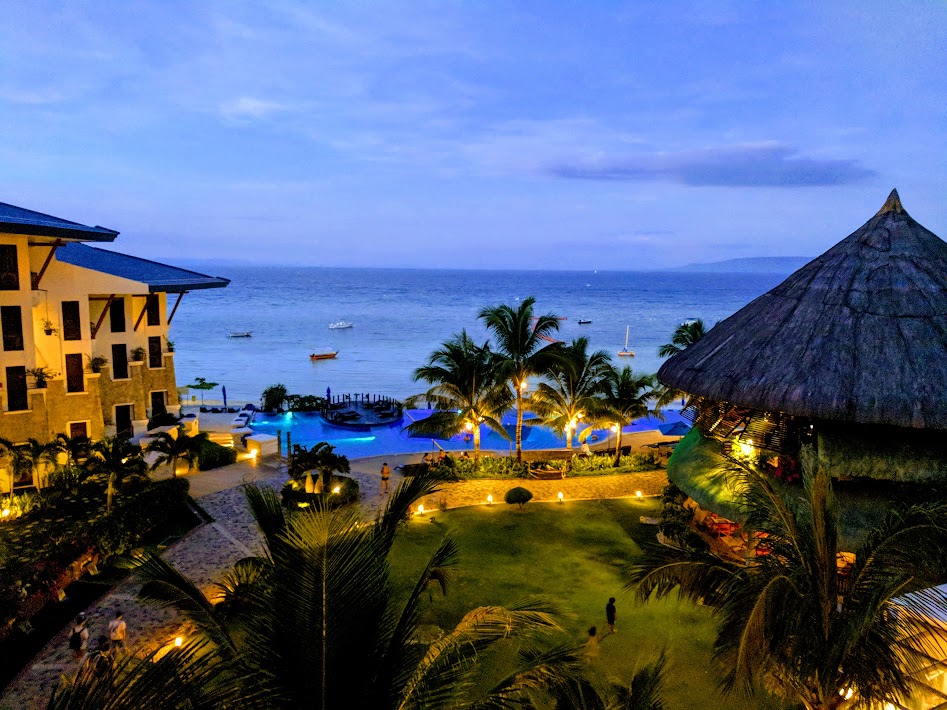 For the next 3 days, it was on to our originally scheduling pre-bed-bug-trauma programming: nothing productive at all. It was lovely. 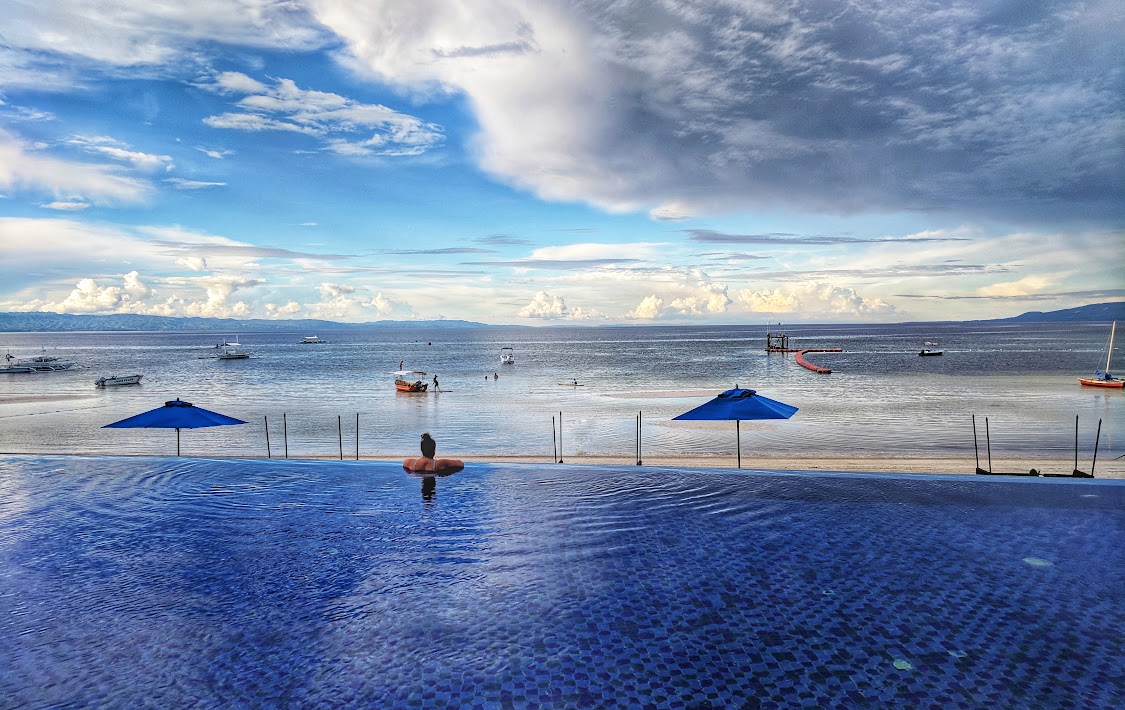 On our last night, we started packing our things up since we had an ‘early’ start the next day (early for #islandlife, not actually early), and I noticed that I was missing a pair of pants. What pair? One of the pairs I had sent to the hotel for laundry, of course. Lesson learned: No such thing as a nice, free thing. I call down to let them know the issue so that they can get them back to me first thing the next morning. When I hang up, Ben suddenly notices a pair of pants in his pile of stuff that aren’t his and he throws them to my side of the bed stating that their mine. Whoops! I call back down and tell them, JK, I found them. Then I hang up and actually go look at the pants. Anndddddd just kidding, those aren’t my pants, they are a total stranger’s pants. (I really wish there was a shaking head emoji.) I call down to reception AGAIN to explain that nevermind, they’re not my pants and in fact they are a stranger’s pants, so tomorrow morning someone better come bring my pants and pick up these rando pants. Good night.

The next morning I called down first thing to bring up the pant issue and they sent someone up right away. The guy comes in and soon realizes that the pants in our room are actually the manager’s pants (I kid you not, they have a label inside with a name)…so he takes the pants and promises to go find mine. We finish packing, bring down our luggage, and head to breakfast to give them time. Breakfast is over and still no pants. By this point I’ve come to the conclusion that they’ve given my pants to a stranger and I’ll never see them again. This may seem like a dumb issue but we have very limited clothing with us on this trip and so that pair of pants is like a 1/4 of my bottom half wardrobe! And as you’ve seen from my previous shopping experiences, I was NOT excited to try to find pants for my very large Dominican ass in an Asian country. Like no. Please god don’t make me do it. Anyway. The manager came to apologize again and promised to find the pants and have them mailed to our next hotel. By that point I was VERY ready to leave that hotel and thank goodness the driver had arrived to pick us up.

He dropped us back at the ferry station since we needed to take a ferry back to Cebu to then catch a flight to Palawan island, our next stop. We finally board the ferry and we have about 5 minutes until departure and suddenly a random man appears next to me yelling “miss, miss, are these your pants?!” It took me a second to process, but it was the laundry kid from the hotel! Looks like he found my pants after all and the manager must have sent him in a taxi all the way to the ferry dock to find us before our departure. Bless him. I can’t tell you how happy I was to have my pants back.

And so ended our time in Bohol. Next up (soon, I promise!), El Nido and Puerto Princesa in Palawan + Manila.