Greece was lovely, but I was ready to head back to the tropics. Though a bit illogical to head all the way back to Asia, I was determined to make it to Bali on this trip and we found a way to make it work post-Christmas with some flight finagling. In retrospect, I should have saved this visit for a better time of the year–Bali’s rainy season runs October through April and we went in January, right smack in the middle of the rain-a-thon. Lesson learned.

Day 178: The naggiest cab drivers yet

Our first flight of the day (starting just past midnight) was Athens to Doha on Qatar Airways, followed by a longer flight from Doha to Bali, also operated by Qatar Airways. We booked this early enough to manage to reserve business class seats for a reasonable amount of Avios (we had a massive store of these from the countless British Airways flights we’ve taken in the last few years), and I couldn’t have been happier about this brilliant forethought given the length of the trip. Plus, Qatar Airways has nice business class lie-flat seats! All of this comfortable flying is slowly ruining me for life. #firstworldproblems

After surviving the ~15 hours of flight time, all we wanted was to get out of the airport as quickly as possible and grab an Uber to our airport hotel for the night (since we landed near midnight, it was impractical to head to our beach hotel right away). The world had other plans in mind. Immigration, baggage collection, and customs were easy enough, but as soon as we got outside we were nearly attacked by several dozen cab drivers, all yelling “taxi?! taxi?!” and trying to grab our bags. It was the most stressful arrival experience of my life. We already had an Uber requested, so we did our best to politely say “no thank you” or just ignore the cabbies, but they were not taking that answer easily. At one point, one kept following us until it became uncomfortable, and Ben ended up yelling at him to go away. Anyone who knows Ben knows that he doesn’t really yell, so it was clearly a bit much. We had to walk way too far with our luggage and find some random place in the parking garage to meet the Uber driver–Uber is illegal in Bali and they’re certainly not allowed in the airport. Eventually we made it to our hotel and passed out nearly instantaneously. Hallelujah. (PS Uber is doable is some parts of Bali but nearly impossible in others–e.g. Ubud. The regular cab drivers try to prevent you from getting into Ubers, Uber drivers try to con you into paying a way higher fee in cash, etc. You’ve been warned.)

We spent our first week in Bali at the Sea Breeze Candidasa, a hotel on the eastern side of the island, away from the typical touristy areas. While this meant we weren’t at a gorgeous beach (the hotel was more so in front of a ton of coral rather than sand), it did have a lovely view and it was relaxing and quiet–just what we wanted. The staff was nice, the food was pretty decent (with a wide selection of options), the pool was refreshing, and our room was comfortable. The weather didn’t always cooperate (again, it was rainy season), but we did manage to get at least a few hours of sunshine every day so the rain was tolerable.

Plus, the hotel staff left us with adorable towel animals every day, and really, there are few things I love more than towel animals. 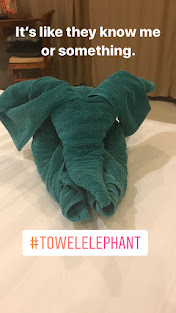 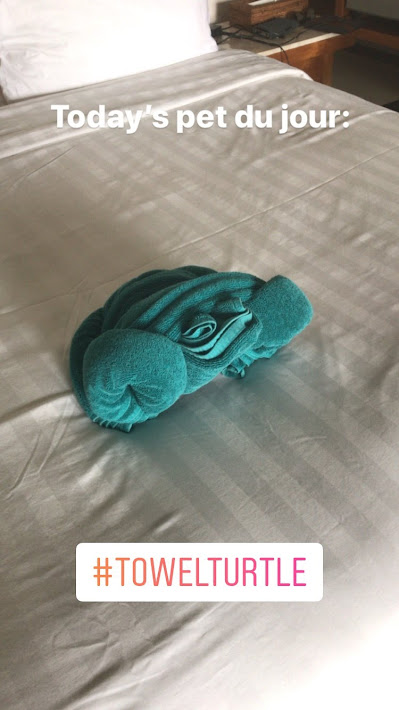 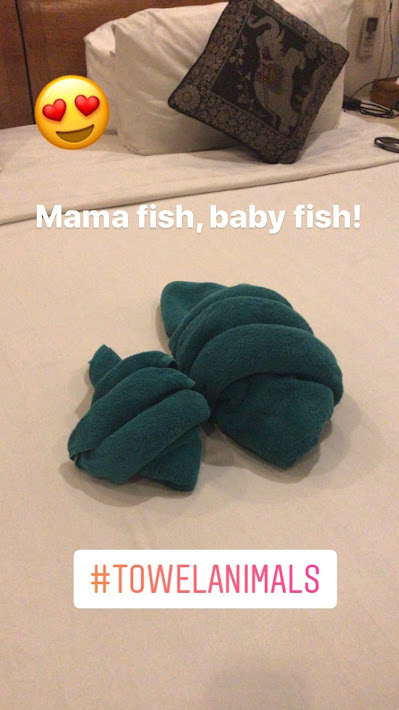 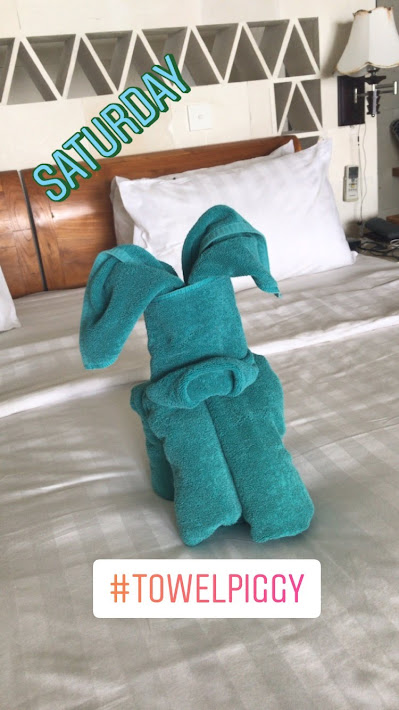 After a few days, we felt vaguely guilty about being so lazy and useless, so we did take a day to rent a car and tour the island a bit. We stopped by Tirta Gangga, a water palace in the eastern part of the island. Of course it poured while we were there, but it was quite pretty. 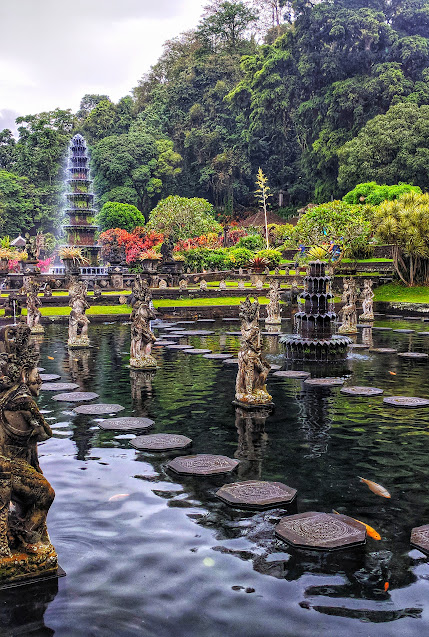 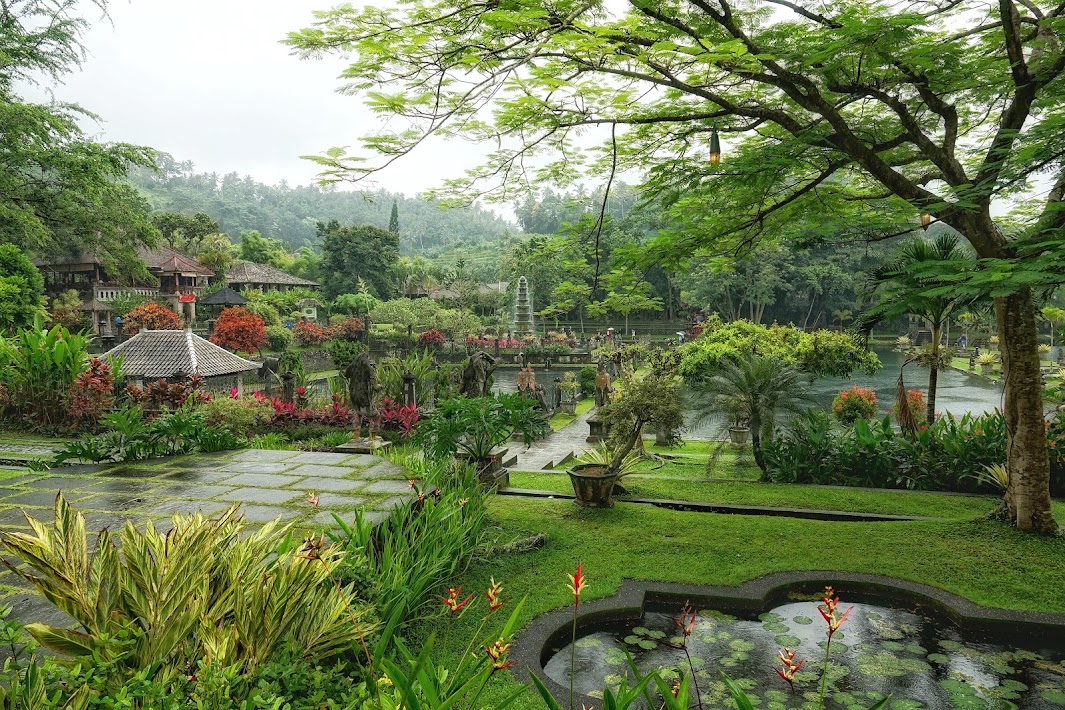 Afterwards, we drove to Mahagiri Panoramic Restaurant for lunch, mostly because it’s supposed to have spectacular views of Mount Agung–the active volcano that was threatening to blow for the few months before our trip to Bali (and ALMOST got us to cancel the trip completely). The views of the rice paddies from up there was indeed fantastic, but Mount Agung was nowhere to be seen–the cloud cover made it nearly impossible to see any part of the volcano. WOMPWOMP.

On our way back to the hotel, we stopped for some more rice paddy views: 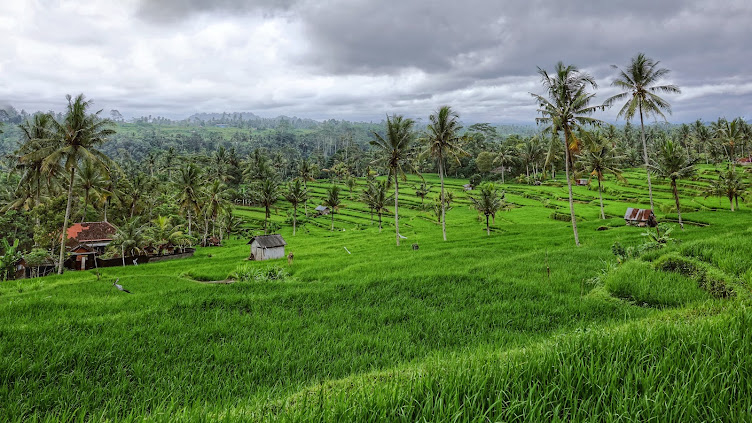 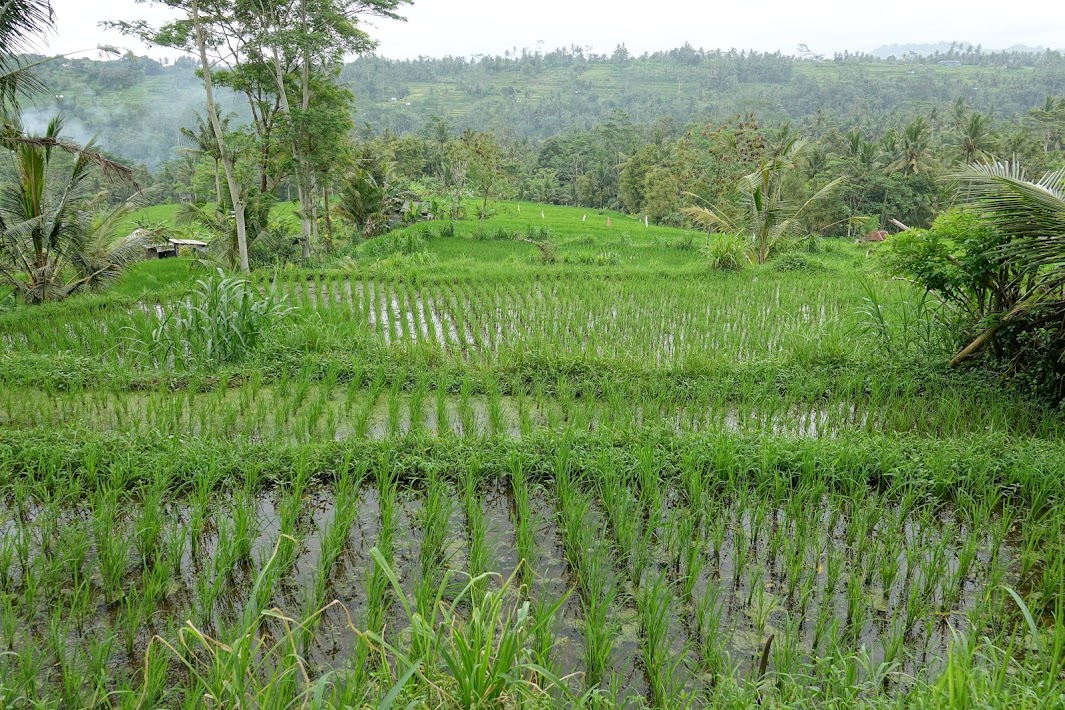 For our second week in Bali, we moved to Ubud, the popular jungle-type destination in the center of the island. Our original reservation for Ubud fell through (the hotel emailed us reporting that they had to move all guests due to a landslide! 😱) and so we ended up staying at the Pandora Hotel instead. It’s a newer hotel with good reviews, and while I would say that we had a good stay, we were a bit disappointed and probably wouldn’t go back. Despite being a new property, they’re already experiencing a lot of water damage and I can imagine this place being a bit of a hot mess after another rainy season or two. Anyway…our stay was good enough. Their menu was pretty limited but the few dishes I tried were good, the staff were nice, and they had adorable resident cats–and we all know that I’m a crazy cat lady.

As we expected (but prayed wouldn’t happen), it rained A LOT while we were in Ubud. It was unfortunate–just made it too frustrating to try to go anywhere when there was a 98% chance of a total downpour at any minute (and usually multiple times a day). That said, we did try to see a few things at least, including the Saraswati Temple in the middle of town. They had a TON of water lilies in the main pond area and it made for a really beautiful setting, even in the rain. 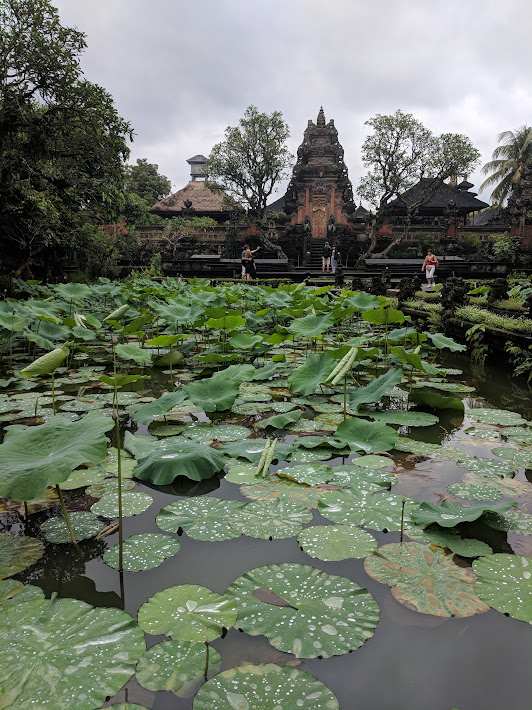 My only complaint? This preposterous sign in front of the temple (which was closed at the time anyway). Like…seriously?

We also visited the macaque monkeys (aka Balinese long-tailed monkeys) at the Sacred Monkey Forest Sanctuary. Approximately 600 monkeys live in the area and the experience was simultaneously adorable, terrifying, and hilarious. The monkeys here (and probably everywhere, but here especially) are BRILLIANT. They know that visitors can buy bananas from the sanctuary rangers (or bring their own human snacks), so they’re constantly on the look-out for visitors with bananas and come running…literally. This is cute at first until you see a monkey climb on a person’s body (head, back, arm, whatever) and try to yank the banana (or their backpack full of bananas) out of their hands. These guys are no joke. Now, to REALLY understand their brilliance, you need to see a monkey 1) steal jewelry from a visitor (more specifically a pearl earring, right from her earlobe), 2) run away with it, and 3) hold it ransom in exchange for food. I am NOT joking. It is the most insane thing I’ve ever seen. That monkey was rubbing that pearl earring like he was Gollum and the earring was His Precious, watching the ranger come close and deciding if the food offered was a worthy trade. The monkey REFUSED to trade for a banana, but acquiesced when a GRANOLA BAR was offered. Incredible 😂 100% worth a visit for a good laugh and appreciation of monkey brilliance. (Warning: take off your jewelry before going inside!) 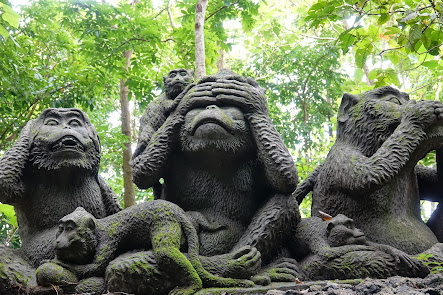 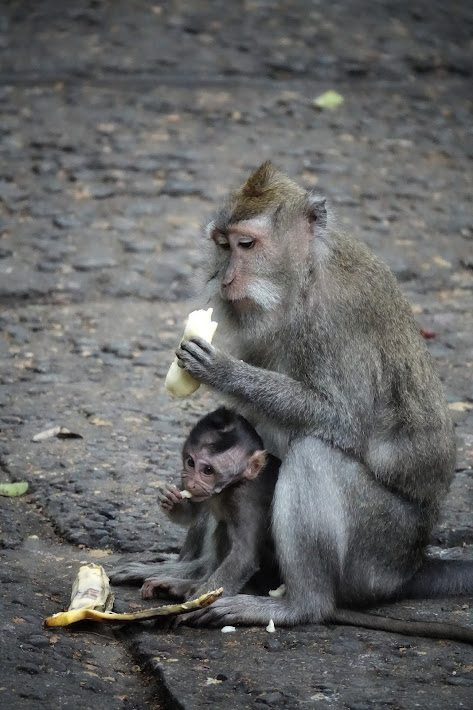 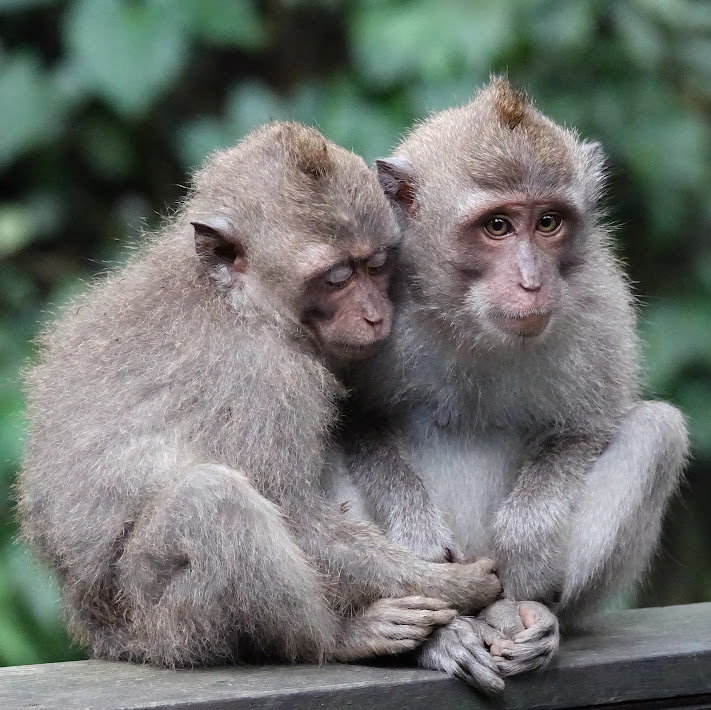 Another fun little tid-bit that shouldn’t go without mention are the very, very, very strange statues all over Bali. Here’s a sampling:

Touristy stuff aside, we also were lucky enough to find a time to meet up with Esther, an old friend of mine from high school, and her husband Lo for dinner! They now live in Bali, teaching at a local school. It was so nice to see her and learn about all of their travels through Southeast Asia. Here’s hoping we all get to see each other again soon! 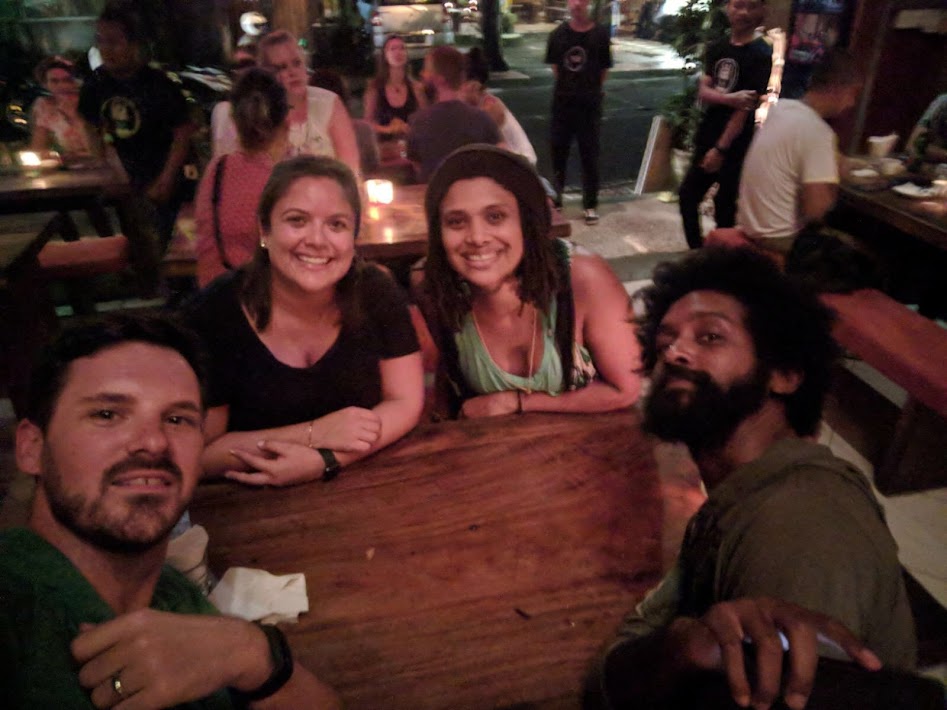 I’ll end this post with a special shout-out to Michele’s JamBali Cafe, a Jamaican restaurant in Ubud. Trust me, I know how odd it sounds to go to a Jamaican restaurant in Bali of all places, BUT Esther told me they had plantains and there was NO WAY I was missing out on that opportunity–I hadn’t had maduros (sweet plantains) since July when we left the US and I was dying (and I haven’t had any since JamBali and I’m dying again!). Life is short–eat the plantains.

And that’s that! I didn’t love Bali the way that I expected to, but I think a huge part of that was the weather…I’m determined to try again during dry season. Next up: a brief stint in Kuala Lumpur + a few days in a Maldivian paradise!