Our final planned stop for Asia was the Maldives because – DUH – what better place to end 3+ months in Asia?

Now that we were finally in a big city again, we took the opportunity to enjoy some good old mall shopping. The targets? Bathing suits and sunscreen. Our first mall attempt was a giant failure on both counts: 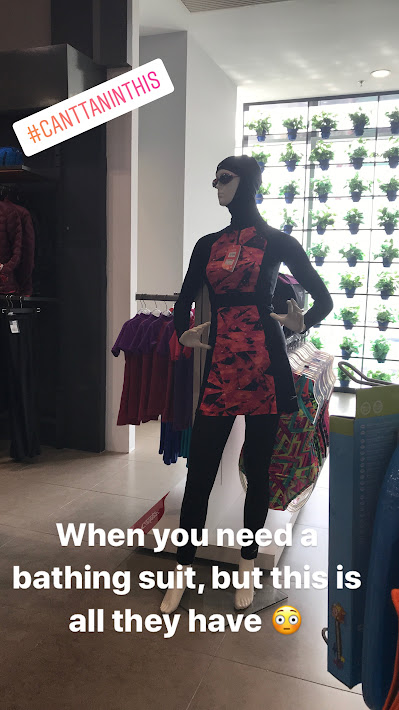 No hate on the burkini but like…I can’t get a tan wearing that. Our next mall attempt was much more successful, mainly because it had more western stores so I was able to find a proper bikini. Sunscreen was another story–we found some but the prices did NOT get any better. How on earth can you charge me >$15 for a tiny bottle? It’s extortion! But it’s not like the prices were going to be better in the Maldives so we had to suck it up. Ugh.

With all the mall back-and-forth, we didn’t really have time to properly explore KL, which meant limited opportunities for local food. Ben did have a craving for sushi though, so we went to a rando Japanese restaurant at the mall. The food was pretty average (which was a bit disappointing) but Ben felt the need to try one of the grossest things I’ve ever seen:

A tragedy for sure. Our Mickey D’s the next day was way better (though still not at Luxembourgish standards but that’s an unfairly high bar).

Our time in KL was over and it was time to get to the airport for our flight to the Maldives–and it was a near disaster getting there. First, we were already behind schedule because of traffic in the city, and then the Uber driver dropped us off in the wrong terminal! Then we find out that the two terminals are quite far away from each other so it’s either a 20 minute car ride or a fast train ride (but you have to wait for the train). Ben nearly blew a coronary thinking we’d miss our flight (and honestly, I figured we probably would but someone had to be the calm one), but somehow we caught the train quickly and the check-in agents let us check our baggage through. Success, right??? Wrong. We thought we’d passed the biggest hurdle but then came the 20 mile run through the largest airport of my life. There are no words to tell you how ridiculously big that airport is. How we made it on that plane is still beyond my comprehension. Clearly god didn’t want us to miss our way-too-expensive #islandtime.

I can’t believe I’m sharing these…

…but this is how gross we were after running through the airport.

We arrived without issue in the Maldives and stayed at a rando hotel near the airport for the night (we landed after dark and the seaplanes only fly during daylight hours)–but not before investigating the sunscreen situation and nearly giving ourselves a heart attack:

After Bora Bora, I was pretty convinced that any subsequent beach location would be a slight disappointment. Well…I was wrong. Though hard to believe, there are in fact other places on this earth that are just as gorgeous and magical. We took a (tiny) seaplane from the main Male airport to our resort island, Kudafushi Resort and Spa, in the early afternoon. I won’t pretend that the tiny airplane wasn’t terrifying, but the incredible views do help distract you from the tiny-ness of the plane. (Did I mention it was tiny?) 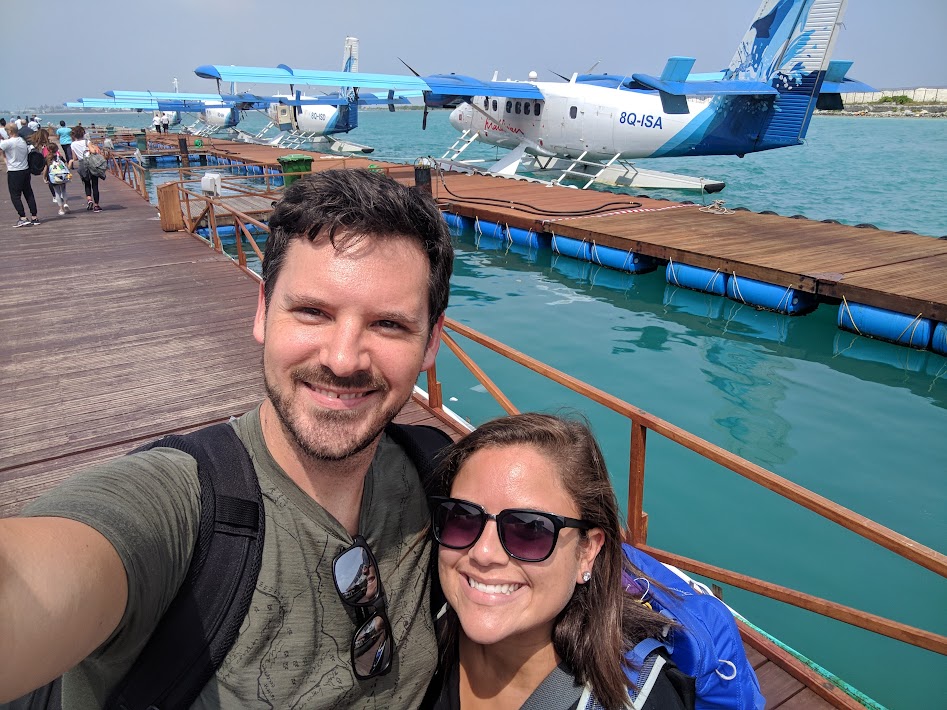 Because we couldn’t resist the urge, we stayed in a (ridiculously expensive) overwater bungalow again. #zeroregrets (We also told them it was our honeymoon, which it was…our second one, right? 😂😏🤫) 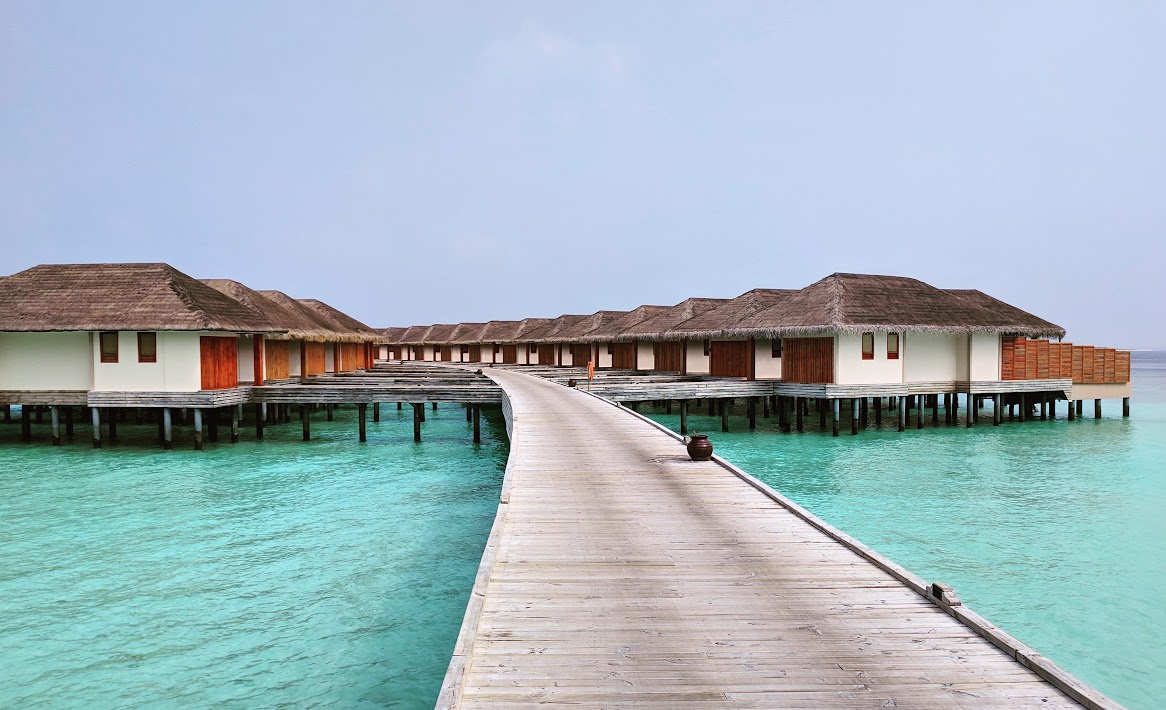 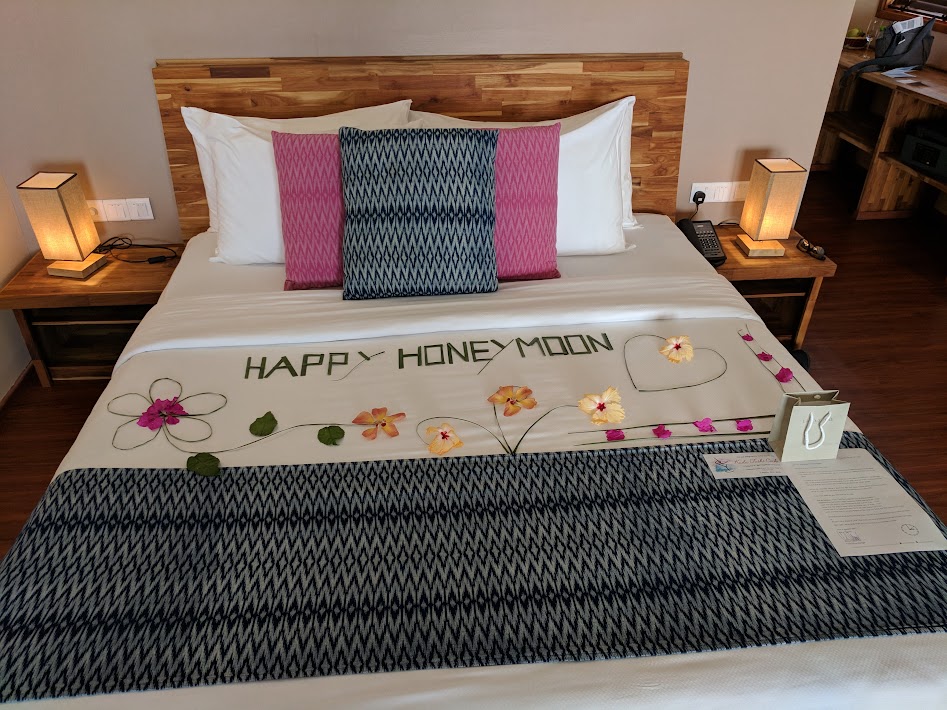 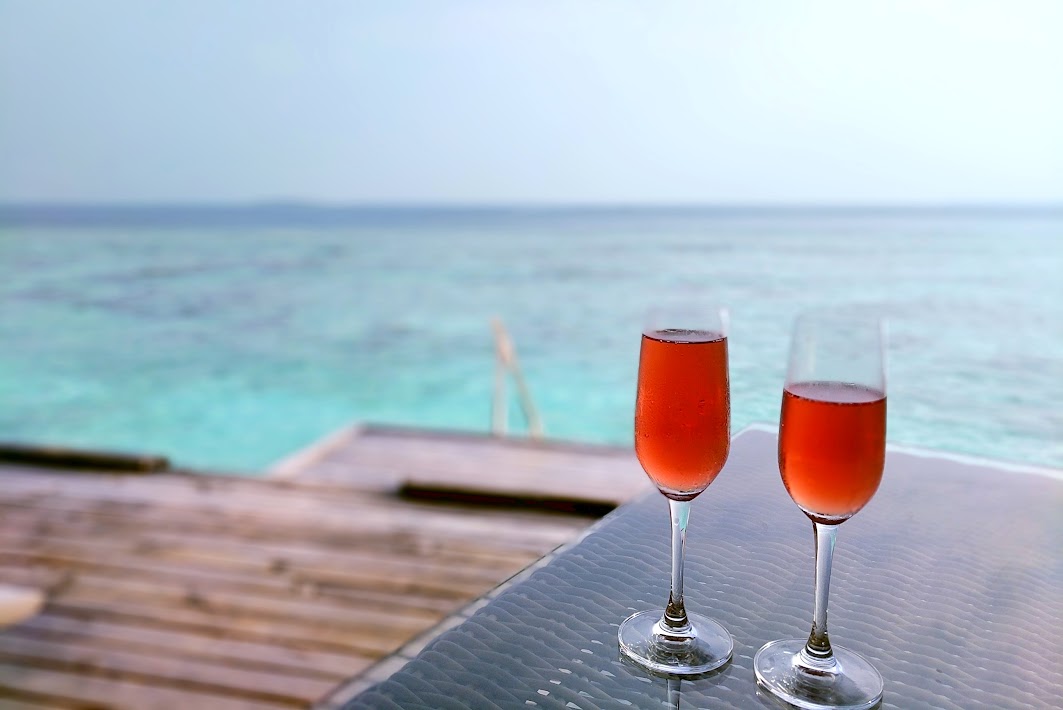 Our few days there were pretty damn magical. Who can get enough of these views?! 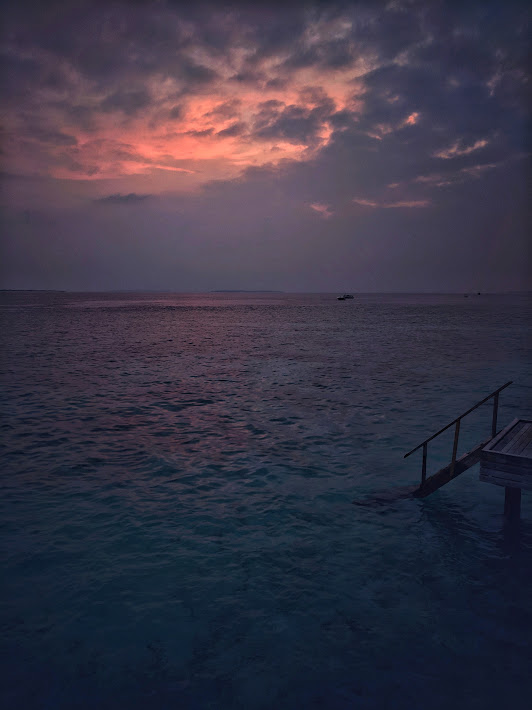 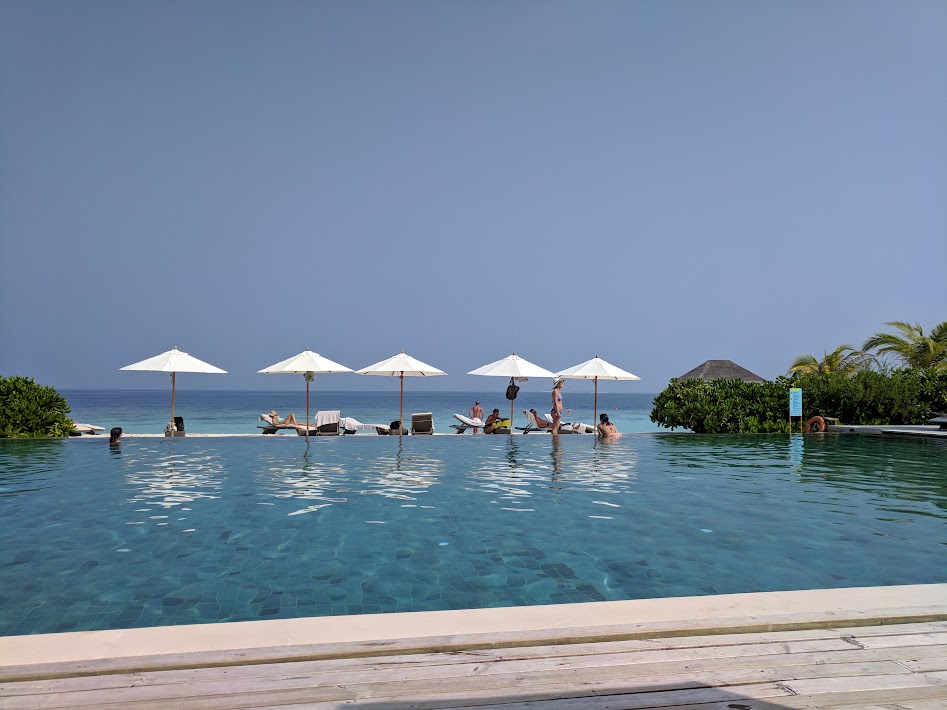 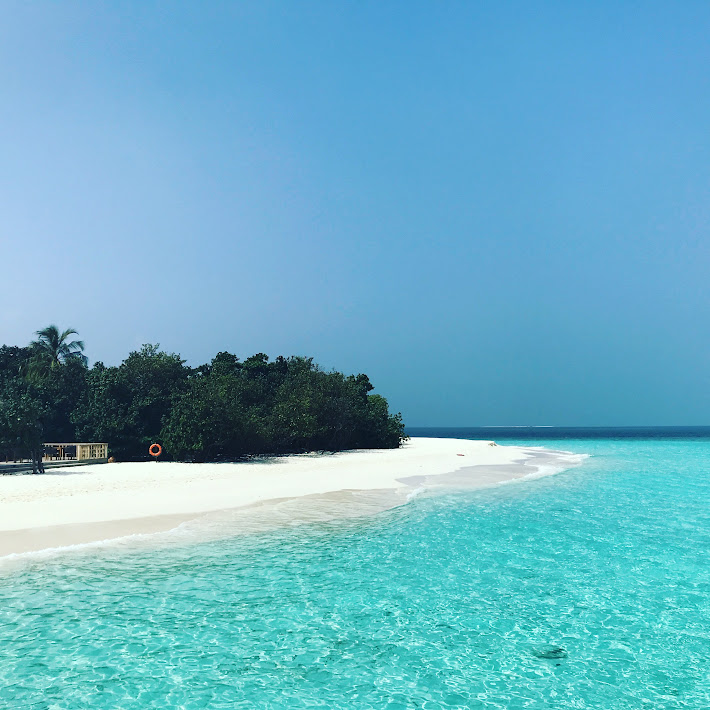 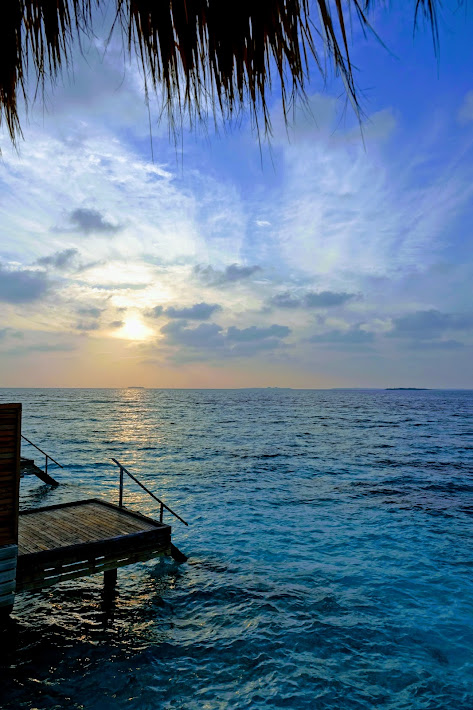 We were even treated to a couple of nice romantic dinners (one for our ‘honeymoon’ and one as an apology for a traumatic event…more to come in a minute), and one of them happened to be the night of the Super Blue Blood Moon! 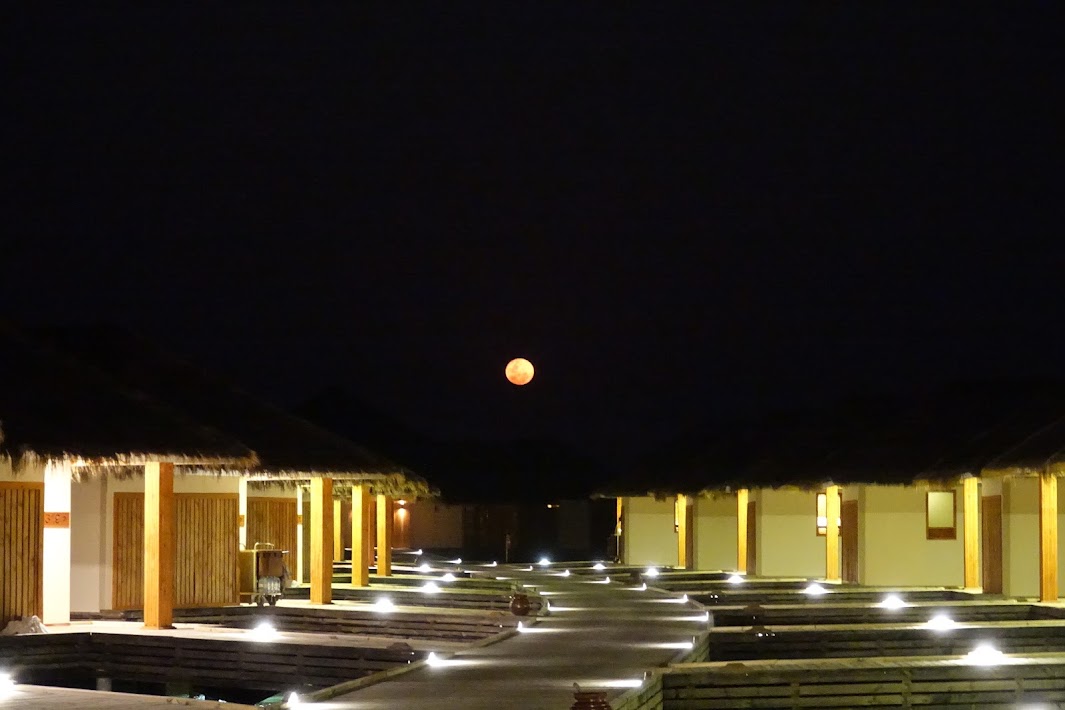 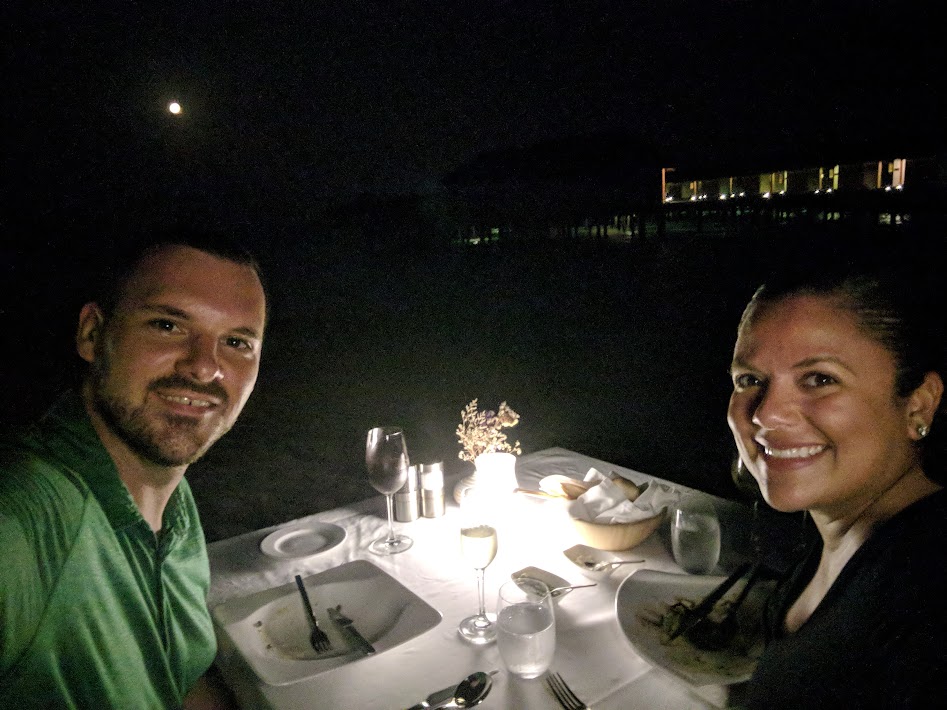 Since I’m cursed, no beautiful vacation is complete until I have a traumatic bug incident. This time? A cockroach infestation in our bungalow!!!!! 😳😨😱😫😭😭 It was horrible. We came back from dinner one night and I went to wash my hands in the bathroom sink and saw one run across the counter top–and of course screamed for Ben to save me. I figured “it’s ok, it’s a tropical island and it’s one cockroach, whatever, as long as it’s dead I’ll be fine”. Well…one became 3 and we didn’t have bug murdering spray so I called the front desk to send someone. When the guy finally showed and started to kill them off, more and more kept showing up! It was like they sent their troops as back up! I know I sound ridiculously dramatic but it was HORRIBLE. Even Ben would agree and he thinks I’m insane about bugs. At one point, a couple showed up in the bedroom and I was officially OVER IT. I called the front desk and asked for a new room and they immediately agreed. We then spent an hour spraying random spots in the new room to see if any new visitors showed up. Fortunately we were bug-less. The rest of our nights there were lovely and I was able to forget the trauma…sort of. The extra free dinner helped. A bit.

That shouldn’t be the last image you think of for the Maldives though, so here’s another one instead:

Despite the slight trauma we experienced, leaving the Maldives was a true tragedy. Those views are just too much to give up.

Another seaplane ride later, we were back at Male airport to await our Qatar Airways flight out of Male. By some miracle we were able to upgrade the first leg (to Doha) for pretty cheap–totally worth it to try to get some proper food and sleep since it was a red-eye trip. We couldn’t upgrade the second half, which was disappointing at first BUT a blessing in the end because the plane turned out to be pretty old–which meant business class was made up of old upright seats. (Yes, I know, we’re snobs. #firstworldproblems) We luckily had an empty seat between us in economy and that made it bearable for sleeping a bit so we wouldn’t arrive totally dead in…Nairobi! That’s right…it’s time for Africa! More next time.