Our time in Asia was over, but the fun was only just getting started. There was a lot to look forward to for our 8 weeks in Africa, but I would be lying if I didn’t admit what you all already know–it’s all about the elephants! 🐘😍

Our flight from Doha was a red-eye, and so we landed in Nairobi early in the morning, ready to fight the massive lines of immigration craziness. Except just kidding…somehow the airport is totally dead and everything from deplaning to customs took 10 minutes. “Are we really in Nairobi?” I asked. From what we heard afterwards, apparently we got lucky–at peak times, the airport is a disaster. I’ll take it. Grabbing an Uber was easy as pie and off we went to our hotel for the night, the Royal Tulip Canaan. Sounds fancy, right? Eh…I was underwhelmed. But whatevs, it had a bed and shower and what else do you really need?

More importantly: we were not alone for this part of the trip! Four friends were joining us for our Kenyan safari adventure and two (Cheri and Craig) had arrived in Nairobi the night before. So, after a much needed shower, we all went out for lunch to Open House Restaurant, which is most definitely the least authentic name I’ve ever heard for an Indian restaurant. Food was great though, so no complaints here. (Sorry, we suck at taking food pictures now.) The afternoon was spent lazing about, preparing for our impending animal adventures. The last duo (Casey and Lori) arrived later that night, just in time to crash for the night.

We booked a private safari, which can be expensive but was made much more reasonable by splitting the car/driver costs across 6 people. BTW we booked all of this through African Budget Safaris and we fully recommend them. They were easy to work with and gave great advice. The actual safari company was African Horizons and they were great as well–fantastic driver/guide and they took good care of us (some brownie points lost for a shambly car but would still consider them in the future). The itinerary was a 5 day/4 night trip with one day spent at Lake Nakuru National Park and the rest of the time spent at Maasai Mara National Reserve, which is contiguous with Tanzania’s Serengeti National Park. We also had a stop at Lake Naivasha for hippo viewing (which was a bit of a bust but that’s luck for ya). In Lake Nakuru NP we stayed at the Lake Nakuru Lodge and in Maasai Mara NP we stayed at Maasai Mara Sopa Lodge, both nice lodges with very nice staff.

On the first day, while driving to Lake Nakuru NP, we made a pitstop to appreciate the Great Rift Valley, a GIANT trench that stretches from Lebanon to Mozambique. It’s incredibly hard to properly photograph, plus the day was hazy, but here goes:

Now onto the good stuff…the animals! First up: Lake Nakuru NP. There aren’t any elephants in this park (WOMPWOMP) so that was a bit of a disappointment, but there ARE rhinos which are much harder to find in comparison so definitely worth a visit. They’ve also got giraffes, hippos, buffalo, zebras, and the occasional big cats (lions, etc). One of the biggest reasons people go to this park is to enjoy the hundreds (if not thousands) of flamingos that flock to the area BUT this is a seasonal event based on rains and food availability, and we weren’t there at peak season–so just a handful of (barely pink) flamingos were around. Boo. That said, here are some of my fave pictures from this park: 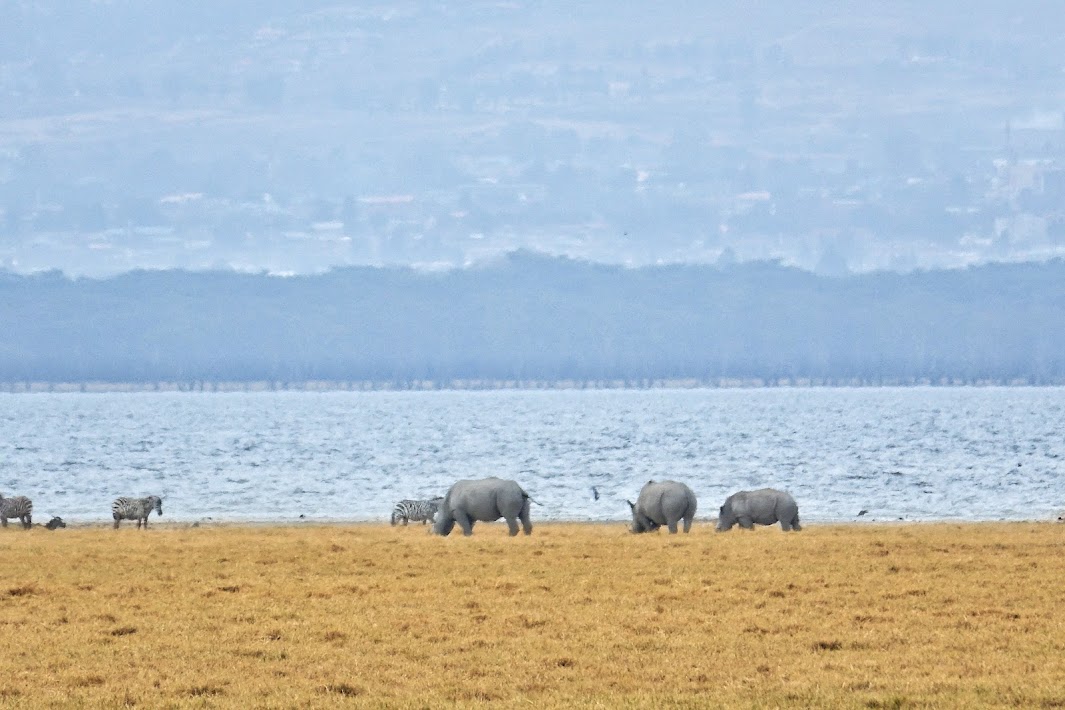 The next day we started out with a brief stop at Lake Naivasha for some ‘guaranteed’ hippo action. While we did in fact see hippos, the action was minimal and unexciting. We did however get to see a pretty sizable eagle swoop down for some breakfast and I suppose that was worth $30 🤔

The drive from Lake Naivasha to Maasai Mara NP was long…very, very long. If you ask our driver though, it was like ‘an hour, hour and a half’. #africatime And of course, because no trip is complete without car trouble, the car’s radiator was having a real life struggle:

But we did eventually make it! And now’s when we get to the good stuff. Lake Nakuru may have rhinos, but Maasai Mara NP has SO. MANY. ELEPHANTS. (And other cool animals.) I really can’t recommend this park enough. There are literally 5 million pictures so I will try to limit myself to the best ones:

While in the Maasai area, we also took the opportunity to visit a Maasai village to learn a bit about the people and the culture. Definitely a valuable experience! So much fun to observe the dances, see their homes, taste their food, and learn about their traditions. But full disclosure: some of their traditions are ridiculously antiquated…like the one where a man looking to marry a woman (a loose term since girls as young as 16 years old can be married off) has to ‘pay’ her father a certain number of cows to be able to take her away. The best part: the older she is, the less cows he has to pay. When I asked what the price would be for a 30 year old, I was basically laughed at…in other words, I’m so old that I’d be free. Good thing I already locked Ben down. 😂 A way more intense (and slightly insane) tradition? When boys reach a certain age, they leave their village to live together as a group out in the bush for FOUR years, where they will learn how to ‘be men’, which includes learning how to LITERALLY fight off/kill a lion with a spear and your arm as a shield. I am not joking. Their arm, wrapped in a cloth, is the shield. Western men are DEFINITELY not that manly 😂

No safari is complete without some funny moments, mostly brought to you by adorable and brilliant monkeys:

Special shoutout to Cheri, who had a birthday shortly before the safari and got a celebratory cake:

On our last day, after the “hour, hour and a half” (😂) drive back to Nairobi, we made our last stop of the trip: lunch at Carnivore. The restaurant name pretty accurately describes what they serve…meat. Lots and lots of meat. All kinds of meat. Sure there’s chicken, beef, pork and goat, but let’s add in some crocodile and ostrich, and since those are still pretty “normal” meats, let’s make things really spicy by adding in ox balls. That’s right…testicles. I OBVIOUSLY didn’t eat them but they smelled pretty damn horrible and those that did brave the mystery meat concluded that they were pretty damn disgusting. Ick. The normal food was good though!

And so ended our Kenyan safari! Cheri and Craig went back home later that evening, and the rest of us relaxed at the hotel for the night. I had a tragic experience with a ‘pepperoni’ pizza covered in vegetables and no pepperoni that left me missing America, but life must go on. Though our safari was over, our time in Kenya was just starting–next up, Nairobi and Diani Beach!

P.S. Tips for your Kenyan safari: